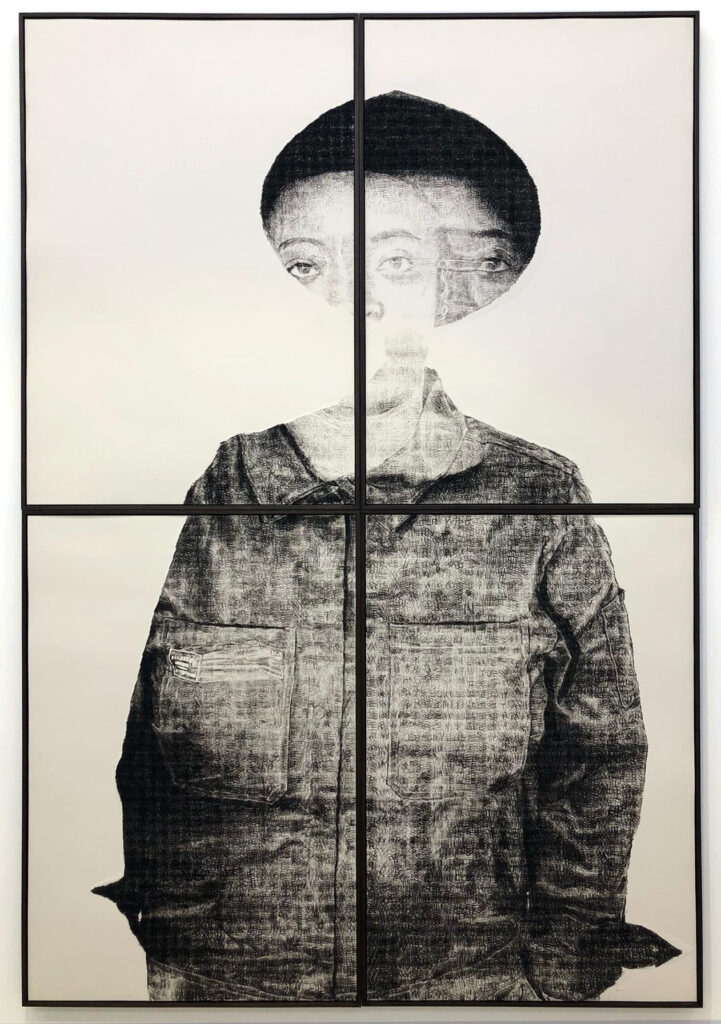 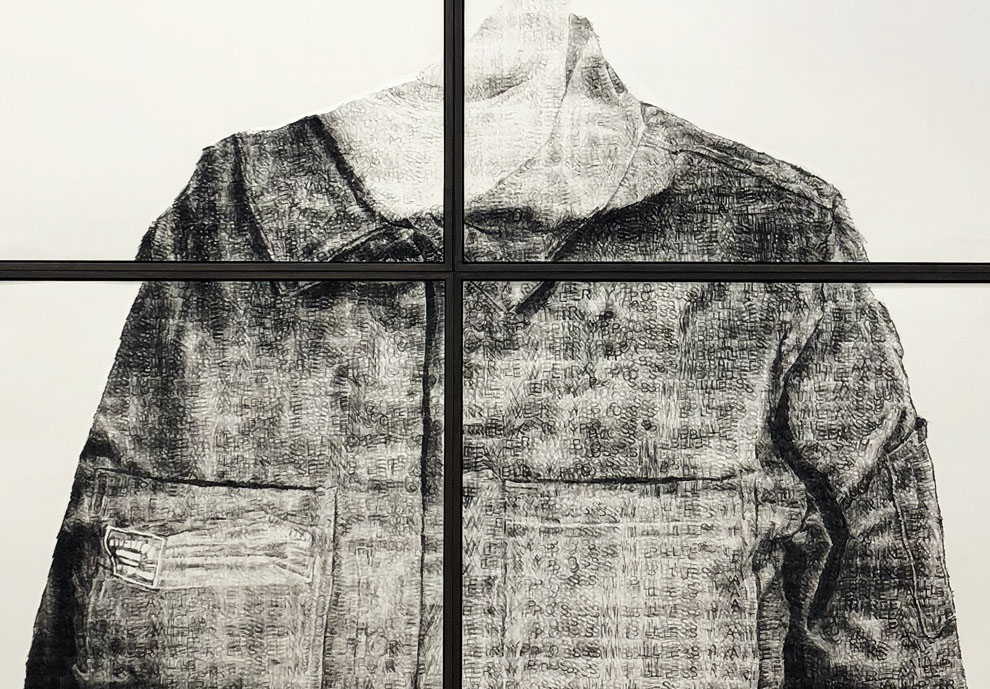 A Surreal Presence for Every Possible State, 2018 by Kenturah Davis from her 2019 exhibition, Blur in the Interest of Precision at Matthew Brown Los Angeles. The four panel work was created using oil paint applied with rubber stamp letters and graphite grid on embossed Mohachi paper.

Blur in the Interest of Precision is a search for parallel conditions between the poetics of our visual experience and the strangeness of our relationship to language. We often use language to carve out distinctions between one thing and another. Davis’ objective—to complicate ideas about meaning, representation and perception—have found refuge in blur and doubling. The new drawings are rendered with arrangements of text, but the words are virtually illegible. Many of the portraits pursue ideas the artist is working through via the writings of Fred Moten and Toni Morrison’s essay, Sites of Memory.

Davis’ work oscillates between various facets of portraiture and design. Using text as a point of departure, the artist explores the fundamental role that language has in shaping how we understand ourselves and the world around us. This manifests in a variety of forms including drawings, photographs and performances.

Recently Davis was commissioned by LA Metro to create work for the future Inglewood Station, slated to open in November of 2022. The work, Sonder, depicts community members photographed at gatherings at the artist’s Inglewood art studio and made into large porcelain enamel steel panels.

The photographs were hand painted with stamps incorporating letters that form the words defining the term “sonder.”

Davis was drawn to the term which alludes to the realization that every person has a unique and significant story. She hopes that the portraits inspire connections between strangers, even if only for a passing moment while waiting for the train.

(images below via LA Metro’s site)

For more images, information about the station, and a video of the artist discussing the work, check out Metro’s website. 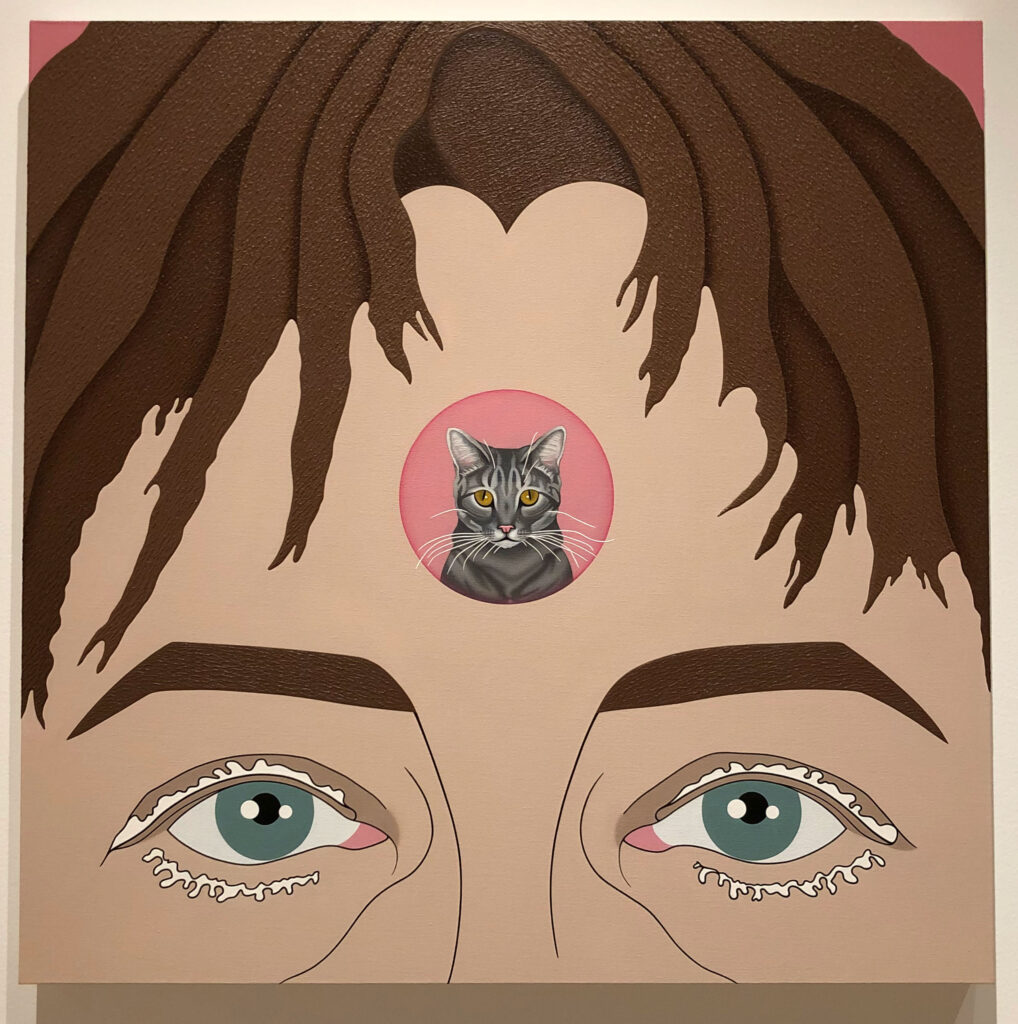 Self Portrait with Ray, 2017 by Linda Stark, part of Hammer Museum’s Made In L.A. 2018 Biennial in Los Angeles. 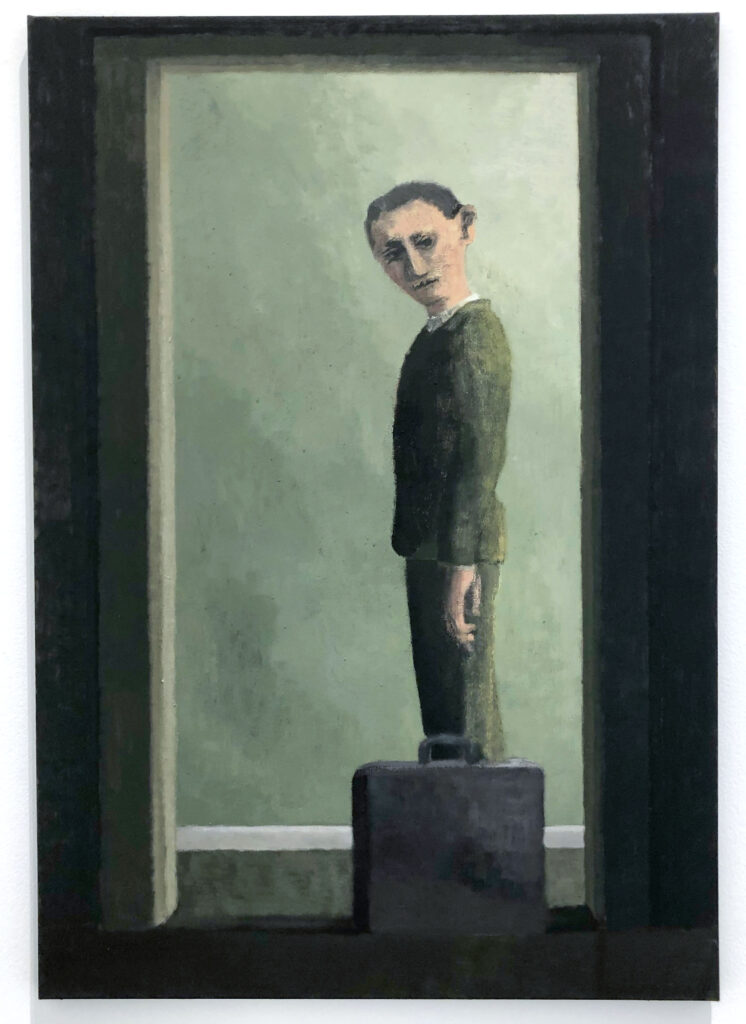 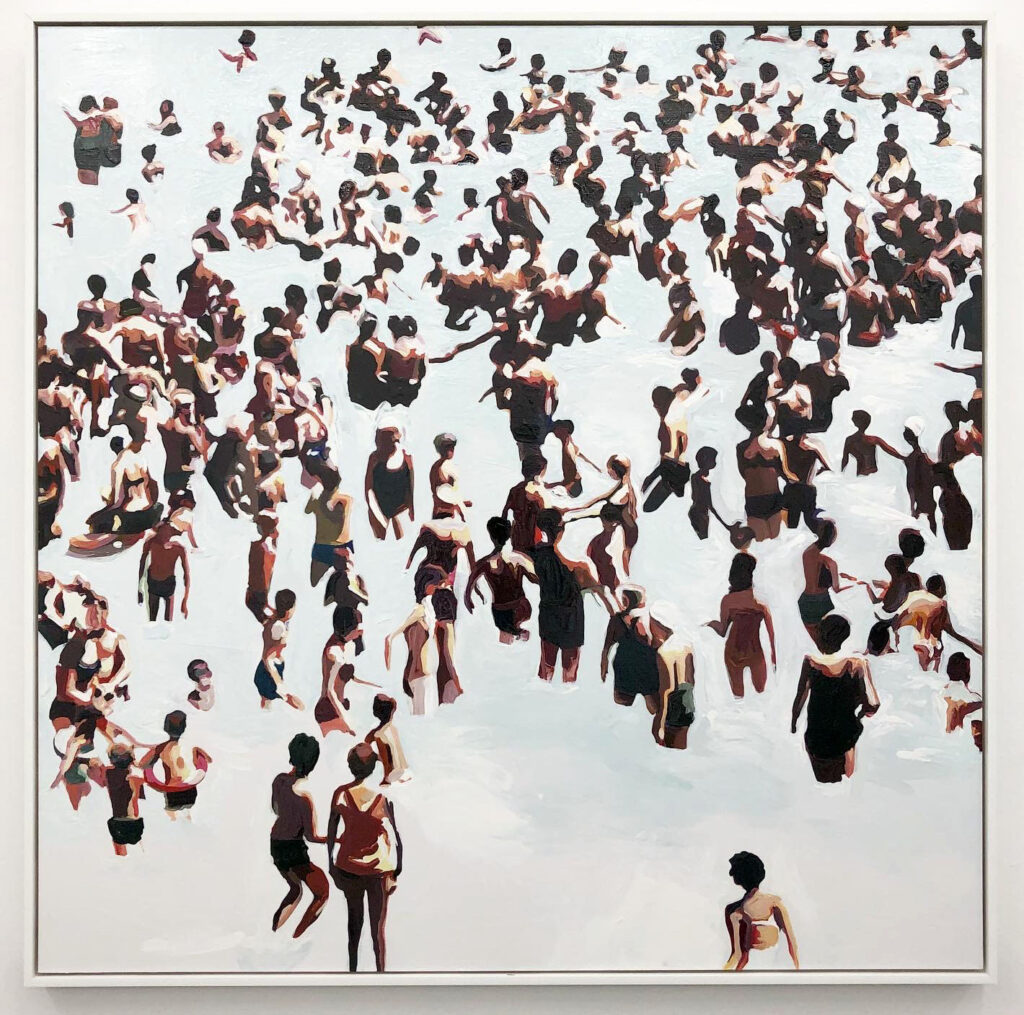 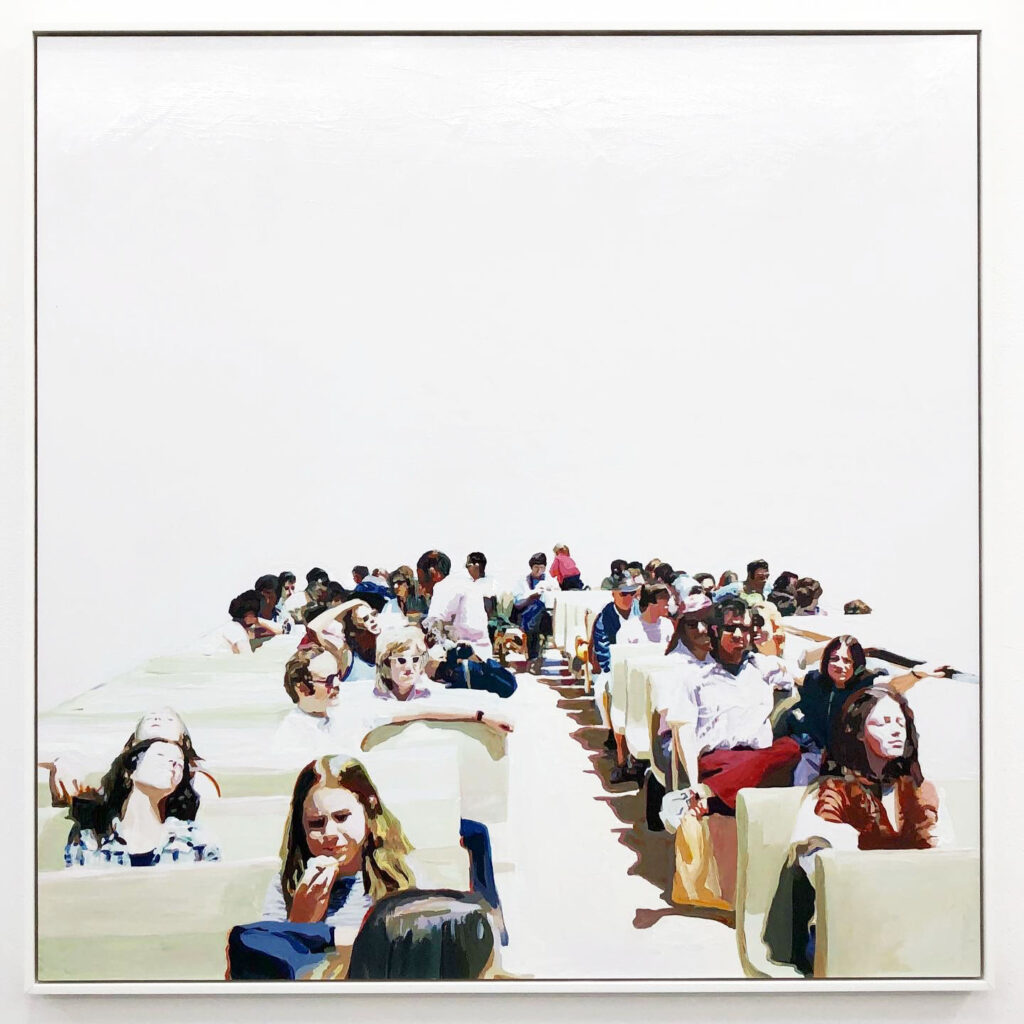 Paintings by Lisa Golightly, from her 2019 exhibition at George Billis Gallery in Los Angeles. 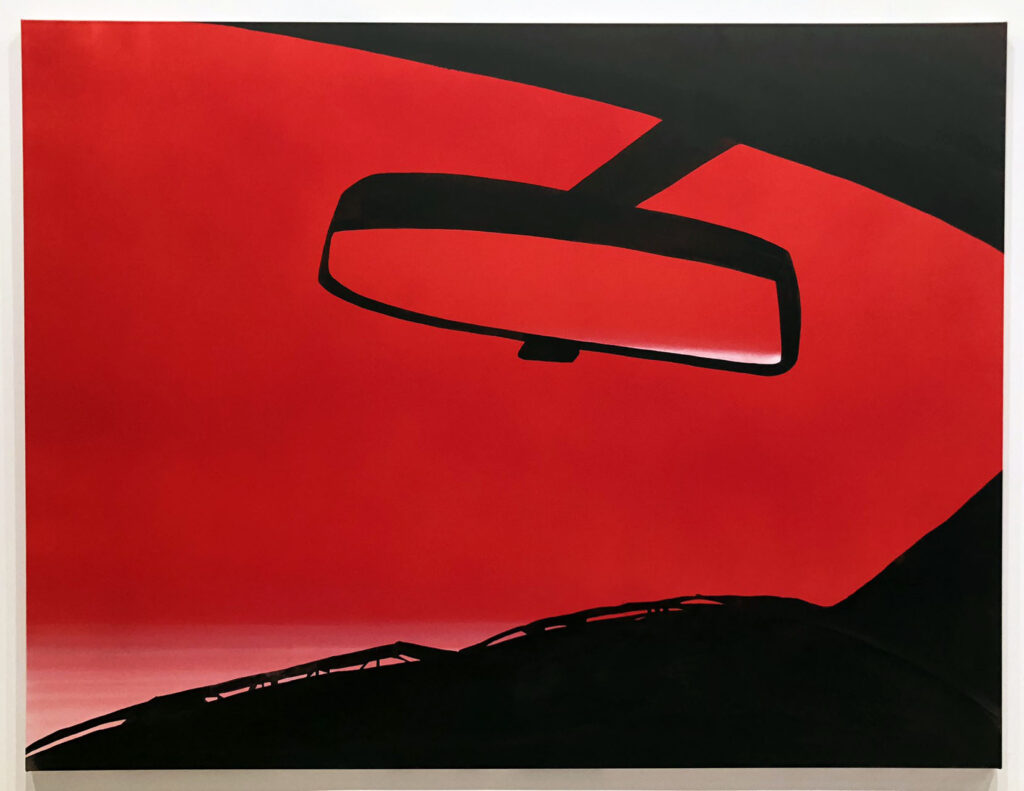 Calvin Marcus’ Los Angeles Painting, 2018, was part of the 2019 Whitney Biennial. The next one is postponed until Spring 2022.

Marcus’ current work can be seen in Beverly Hills at Clearing until 9/3. 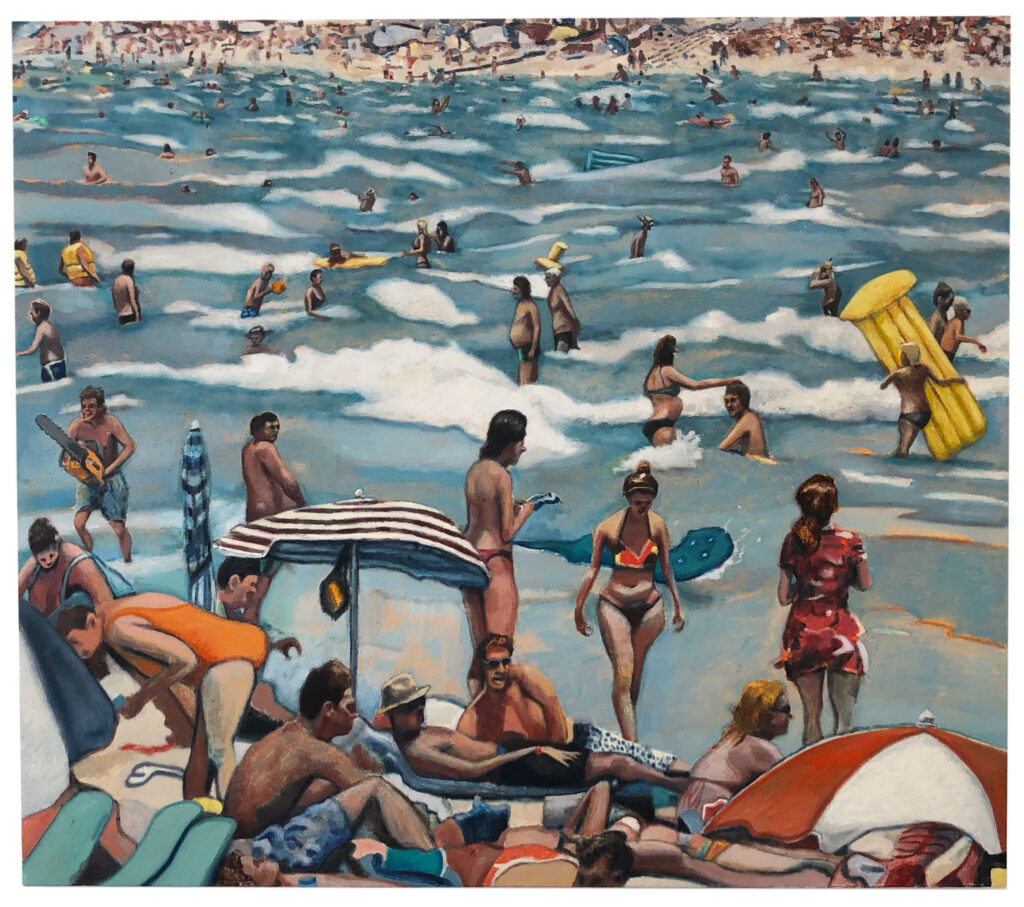 This painting, Reverse Beach, 2019, is from Rob Thom’s exhibition at M+B Los Angeles, The Beast. Thom’s vision of American life takes on many forms, often focused on its more absurd qualities.

For more about his work, check out his interview at Interlocutor or his Instagram. 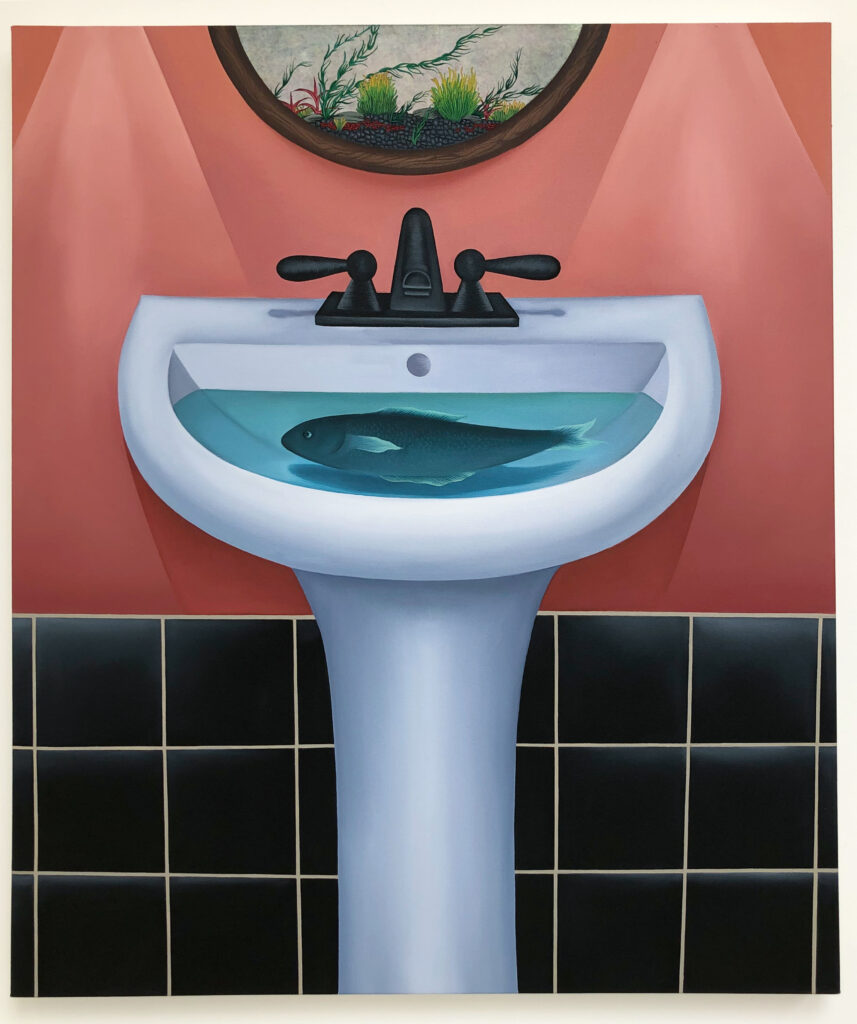 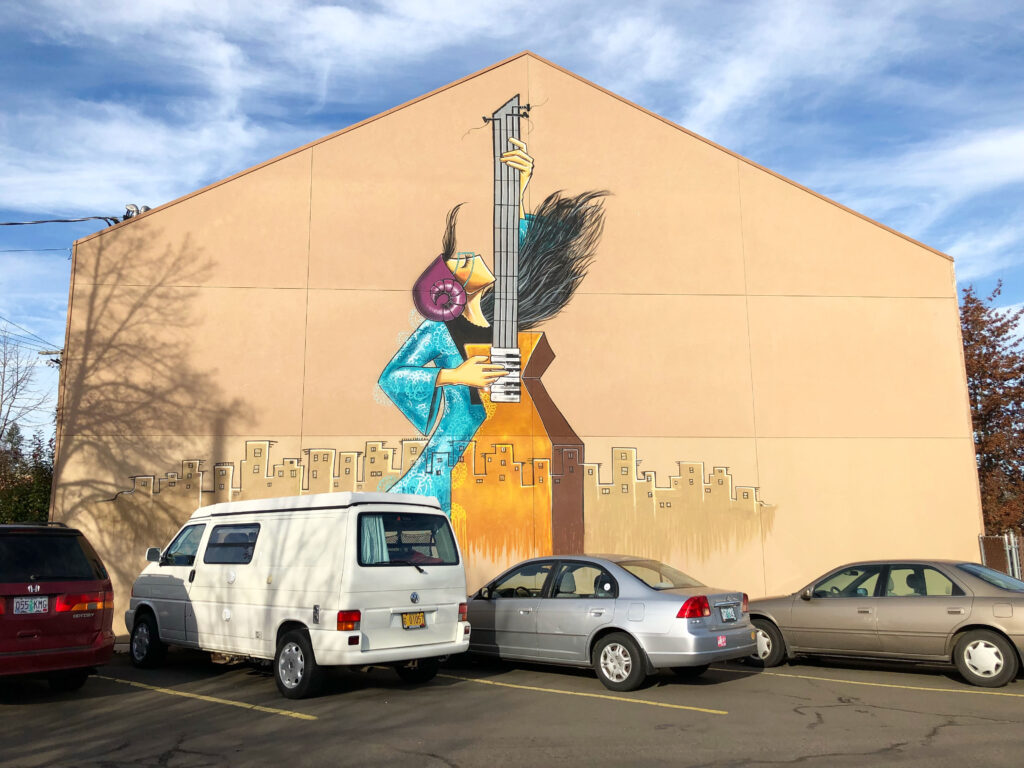 This mural, Play Her Voice, is by one of Afghanistan’s first female street artists, Shamsia Hassani and is located in Eugene, Oregon.

She was also one of Hammer Museum’s resident artists in 2016. While in Los Angeles she met with local artists, painted the mural seen below (image via her website) and showed her work in an exhibition at Seyhoun Gallery in West Hollywood. 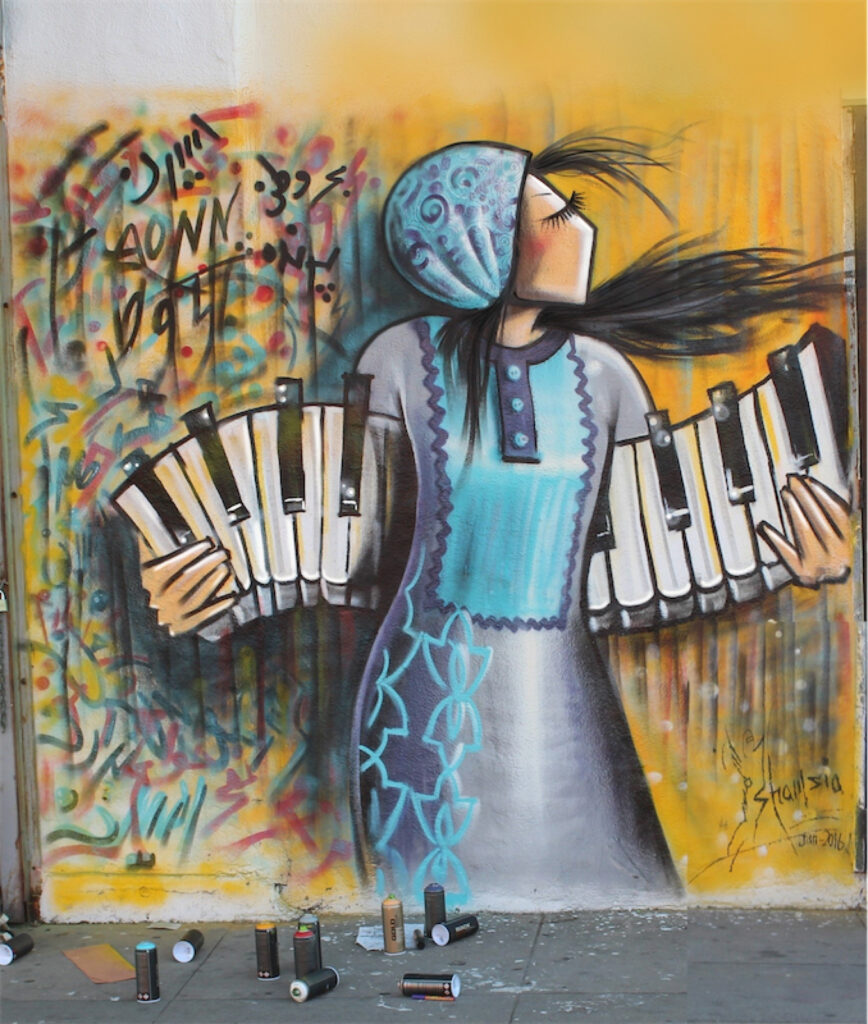 Make sure to check out her Instagram for updates on her current work. 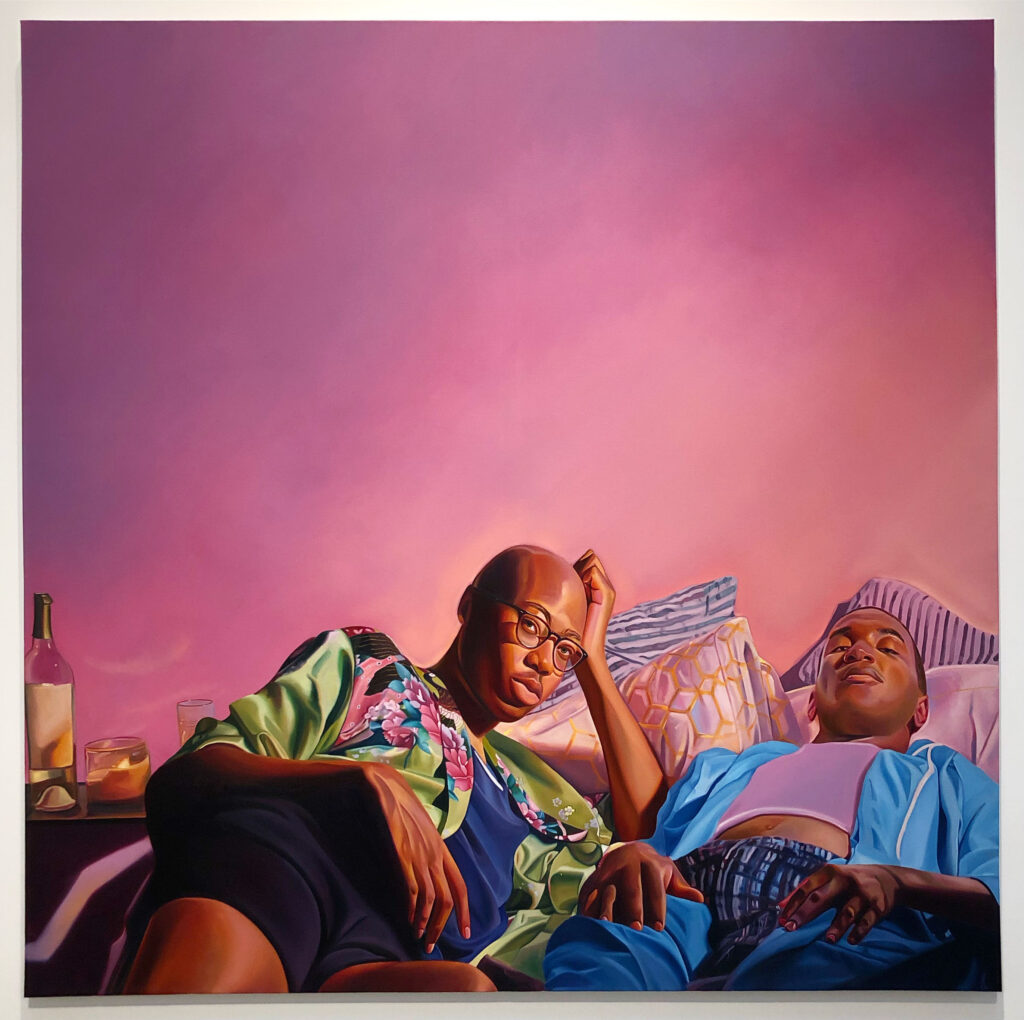 This painting is from Jarvis Boyland‘s 2019 solo exhibition, On Hold at Kohn Gallery in Los Angeles.

Born and raised in Memphis, TN, Boyland navigates intersections of black identity through portraiture. His paintings focus on queer men of color within intimate spaces. Boyland sees the domestic space as the foundation of social ideologies and an incubator that molds the facade of masculinity. Based on photographic images that the artist reconfigures to create specific compositions, Boyland’s paintings sensitively highlight the nuances of these complex interpersonal relationships, identities, and locales.

The idea of comfort is a recurring theme in Jarvis Boyland’s work. The complex intersections of blackness and queerness shape his delicate renderings of the black male body in repose. The figures in On Hold: dream big and beautifully, yet they are fully grounded and aware in their leisure. Boyland’s palette suggests stillness in the digital age of app culture that shapes modern interaction while evoking David Hockney’s 1970s California and the coolness of Barkley Hendricks. Black bodies are not welcomed in cyberspace but are privileged in Boyland’s paintings. Expectations, aspirations, and dreams that infuse queer experiences come into focus. Situated within domestic environments, Boyland’s paintings emphasize limpness through intimate gestures of distant closeness, overlapping satin garments, and a seemingly shared vanishing point. Coy yet cocky, pretty and promiscuous, commanding yet chaste––luxury is embodied by the three figures waiting on the phone with varied expressions in these slumber-party-themed works. There is tense correspondence, a deliberation about relationships within the group of artists pictured, all of whom grew up in the American South: D’Angelo Williams, Cameron Clayborn, and Jarvis Boyland. Skowhegan School of Painting and Sculpture brought these artists together and influenced the tone of this series. On Hold: expands Boyland’s oeuvre of queer relationships. Through his aperture, Boyland’s group and individual portraits collectively depict an idyllic sensibility towards reality. 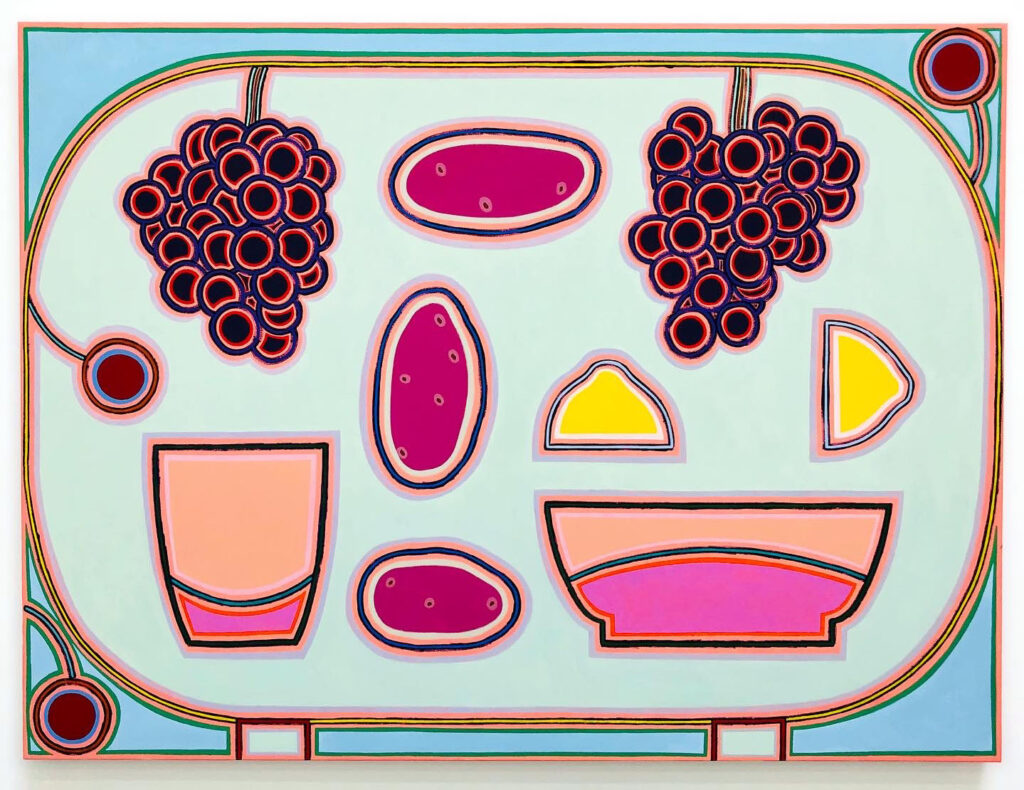 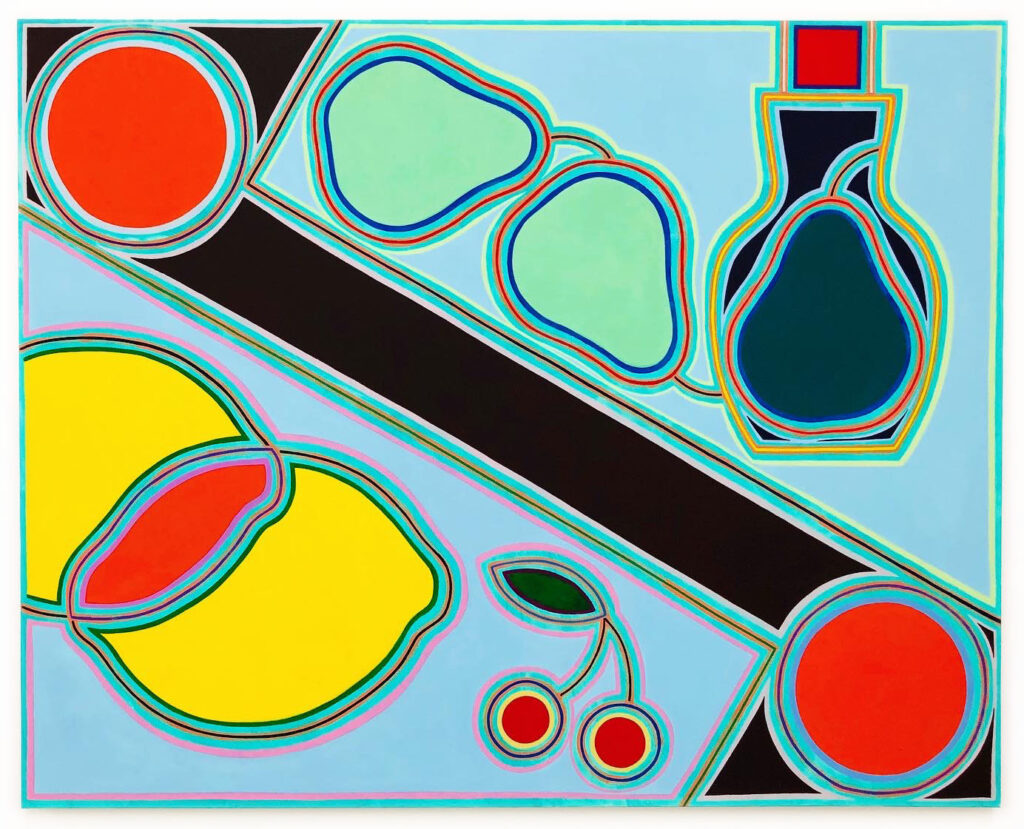 These paintings are from Holly Coulis‘ 2019 exhibition Stilly at Philip Martin Gallery.

Holly Coulis’s paintings operate as stages where still life scenes unfold. A table, or tables, create an initial structure where simplified, geometric forms are arranged and interact. There is a sense of order in these scenes as though the fruits and dishes had been laid out by some external force. Through layers of paint, linear elements are created, giving the illusion of colorful stripes or energy fields around individual objects. These works feel familiar, but upend our sense of figure/ground, horizon-line, perspective, and scale. In these newest paintings, the still life begins to verge into abstraction.

Coulis works from a visual vocabulary built up over years of practice, and the sense of discovery and newness in her works occurs as she continues to explore her own paintings and their possibilities: “I rarely look at a scene. It’s more about shapes of things I know. Things like oranges, lemons, cherries: they’re all very easy shapes.” Standing in front of her works, we are immediately involved in a scene of pleasure and abundance, surprise and stimulation – a stimulation that is physical, intellectual and aesthetic.

Her new exhibition, Orbit, which also includes her sculptures, is currently on view at the same gallery in Culver City until 7/2/21.