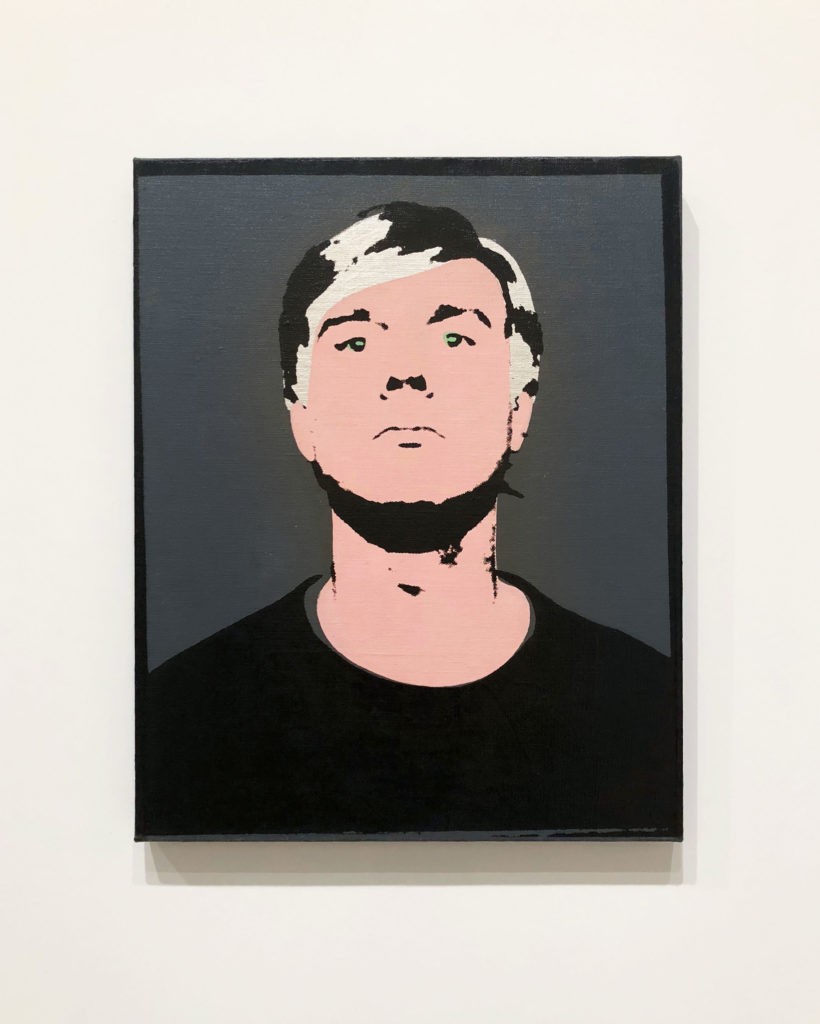 The Whitney Museum’s exhibition, Andy Warhol – From A to B and Back Again is a great representation of the artist’s body of work. Despite the fact that so much of it has been seen before, the curation makes so much of it feel fresh.

Andy Warhol’s artistic legacy is vast. He created a prolific amount of work throughout his career and the exhibition covers a lot of it. From his early commercial illustrations to his more abstract pieces, his collaborations with Basquiat, his silk screen portraits, his videos, films, and books, there is a lot to see. Below are a few highlights.

Warhol’s fascination with death is seen in numerous works in the exhibition. In 129 Die In Jet, 1962 (pictured above), he recreated the newspaper cover by hand and even used a sponge-blotting technique to reproduce the look of the halftone image. It’s interesting to see how this work foreshadowed his move to the screen printing process. This technique combined with his interest in the subject of death can be seen in his car crash paintings made the following year. 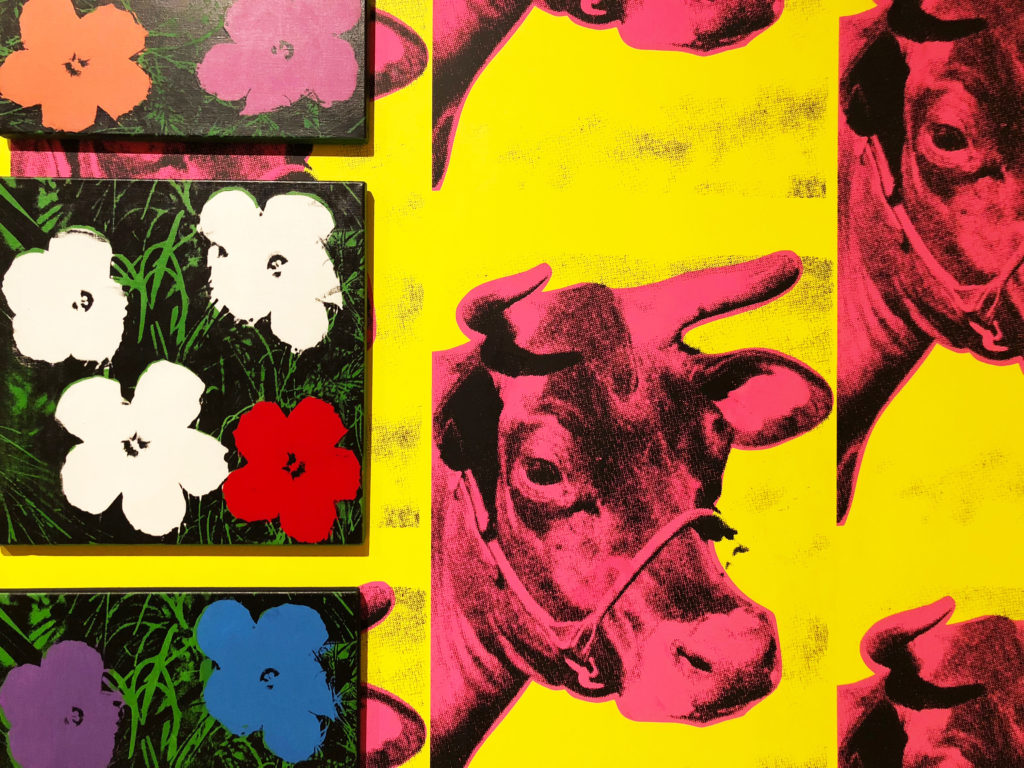 There’s a room dedicated to reproducing Warhol’s Cow Wallpaper, which he used to fill a room in the Castelli Gallery as part of a 1966 installation where he “retired from painting”. He used it again in 1971 for a retrospective at the Whitney, where he directed that all the works be hung on it for the exhibition. It’s a creative way to tie in that history and to present the various colored flower paintings. 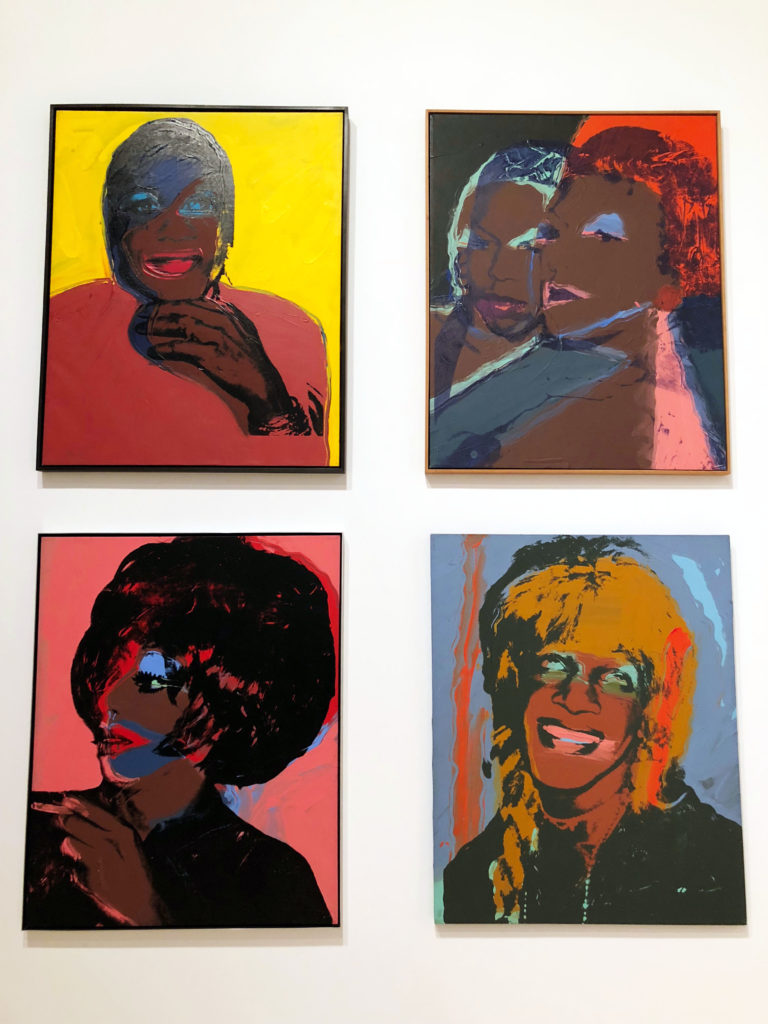 Some of Warhol’s portrait series, Ladies and Gentlemen, 1975, which focused on members of New York’s queer community, is included in the show. It’s a nice contrast to his portraits that more commonly feature socialites and Hollywood celebrities.

His giant portrait of Mao is impressive, and takes up a wall in one of the galleries. It’s a reproduction of a painting by Zhang Zhenshi, which was at the time thought to be the most widely reproduced artwork in the world. Warhol created the work in response to reading about then President Nixon’s trip to meet with the Chinese leader, while China was still considered an enemy of the United States. 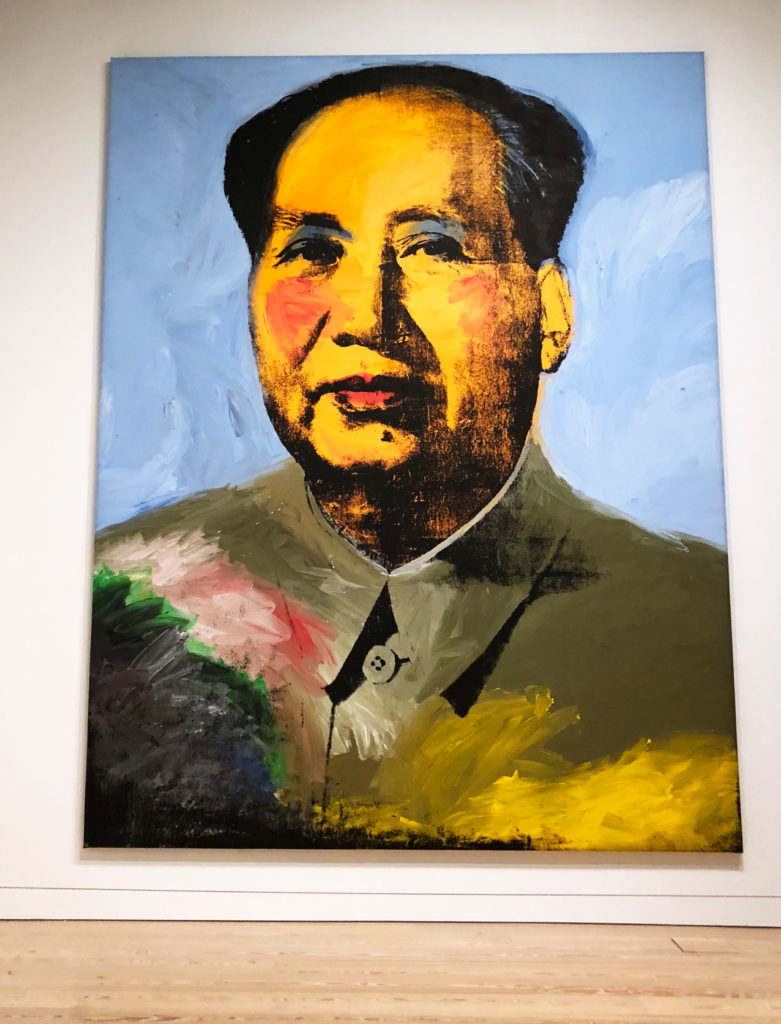 On a separate floor are several monitors playing Warhol’s video work and work related to the artist. Included is one of him eating a Burger King burger, shot by Danish documentarian Jørgen Leth, that the fast food chain used as part of their ad in this year’s Superbowl.

Warhol was a constantly evolving artist who worked in many mediums, in effective ways. The exhibition is a testament to Warhol’s unique perspective and how his work continues to resonate in a time period where so much of what he was commenting on has even more relevance.

Today, December 1st, is Day With(out) Art, a national day of action and mourning organized by Visual AIDS with arts organizations and institutions in response to the AIDS crisis. It is also World AIDS Day, an international day dedicated to raising awareness of the disease.

In 2014, on the 25th anniversary of Day With(out) Art, Visual AIDS commissioned seven artists/collaboratives to create short videos for a program titled ALTERNATE ENDINGS, which are now available to watch online.  This year Visual AIDS has created another video program –ALTERNATE ENDINGS, RADICAL BEGINNINGS, previewed above.

From their Vimeo channel–

In spite of the impact of HIV/AIDS within Black communities, these stories and experiences are constantly excluded from larger artistic and historical narratives. In 2016 African Americans represented 44% of all new HIV diagnoses in the United States. Given this context, it is increasingly urgent to feature a myriad of stories that consider and represent the lives of those housed within this statistic. ALTERNATE ENDINGS, RADICAL BEGINNINGS seeks to highlight the voices of those that are marginalized within broader Black communities nationwide, including queer and trans people.

The commissioned projects include intimate meditations of young HIV positive protagonists; a consideration of community-based HIV/AIDS activism in the South; explorations of the legacies and contemporary resonances within AIDS archives; a poetic journey through New York exploring historical traces of queer and trans life, and more. Together, the videos provide a platform centering voices deeply impacted by the ongoing epidemic.

Next week on 12/7 (Thursday), MOCA Grand Avenue in Los Angeles will be screening this program followed by a performance by Kia LaBeija and a discussion featuring Reina Gossett and Kia LaBeija in conversation with Day With(out) Art curators Erin Christovale and Vivian Crockett. (this event is free)

In New York it will be screened on 12/4 (Monday) at Schomberg Center for Research in Black Culture with a post-screening discussion featuring artists Cheryl Dunye, Ellen Spiro and Thomas Allen Harris in conversation with curators Erin Christovale and Vivian Crockett. (free but make sure to register as the event at The Whitney filled up quickly)

Thinking of staying in this Halloween? You can still enjoy the spirit of Halloween from the comfort of your home, courtesy of two films currently streaming on Netflix.

The first, The American Scream, is the story of three families in Fairhaven, Massachussetts and their personal quests to turn their homes into Halloween haunted houses. The perfectionism and creativity of the attraction creators combined with the support and help of their families, make for an incredibly touching film with plenty of humor mixed in. It’s also a portrait of the community, and it’s a joy to see people come out in large numbers to see the finished work on Halloween.

Part love story, part vampire film, part Western, Ana Lily Amirpour’s debut feature, A Girl Walks Home Alone At Night, takes place in the fictional, often seemingly deserted Bad City in Iran (it was shot in California). With its ghostly oil rigs and a mysterious pit full of dead bodies, it’s also a place with a lot of bad things going on beyond just the local vampire. The Girl spends her nights wandering around town doling out justice and interacting with the troubled locals. One night she ends up making a connection with a young gardener who has done some bad things himself. Although less a traditional horror movie and more a surreal look at isolation and loneliness with horror themes, it is also beautifully shot with a great soundtrack.

This video for Beirut’s song from 2007 was directed by Alma Har’el who also directed the famous Sigur Rós video Fjögur píanó which stars Shia LeBeouf (seen below). She also directed the documentary film Bombay Beach which takes place in the community near the Salton Sea.

Beirut are playing 10/8/15 at the Hollywood Palladium- http://www.thehollywoodpalladium.com/events/beirut-2/#.VhbVk6SDRFU

Repo Man (1984), Alex Cox’s film about aliens, car repossession, and punk rock takes place in Los Angeles in the 1980′s and stars Emilio Estevez and Harry Dean Stanton. It received good reviews at the time of its release and has since become a cult classic. The punk rock soundtrack is great too and includes tracks like the one below- Black Flag’s TV Party, as well as songs from Fear, Iggy Pop and Circle Jerks, who make an appearance in the film.

Alex Cox went on to make Sid and Nancy and Straight to Hell (which features Joe Strummer and Courtney Love) .

Repo Man is playing at the Regent Theater on Sunday (3/15) with a performance afterwards by Harry Dean Stanton and a band that includes Harper Simon.

I love this clip from 1982’s Halloween III, the only Halloween film without Michael Myers.

If you missed the show at Roberts & Tilton, here is one of the works from it. This piece, by New Zealand artist Len Lye, was the first direct film screened to a general audience. Set to La Belle Créole by Don Baretto and his Cuban Orchestra, it was made by painting directly on the celluloid.

I first discovered Agnés Varda through the documentary, The Beaches of Agnés.  She’s an incredible person, who at 85 (80 in the film), is still making films. This unique presentation of her life is both compelling and inspiring.

Check out some of her work at LACMA’s Agnés Varda in Californialand.