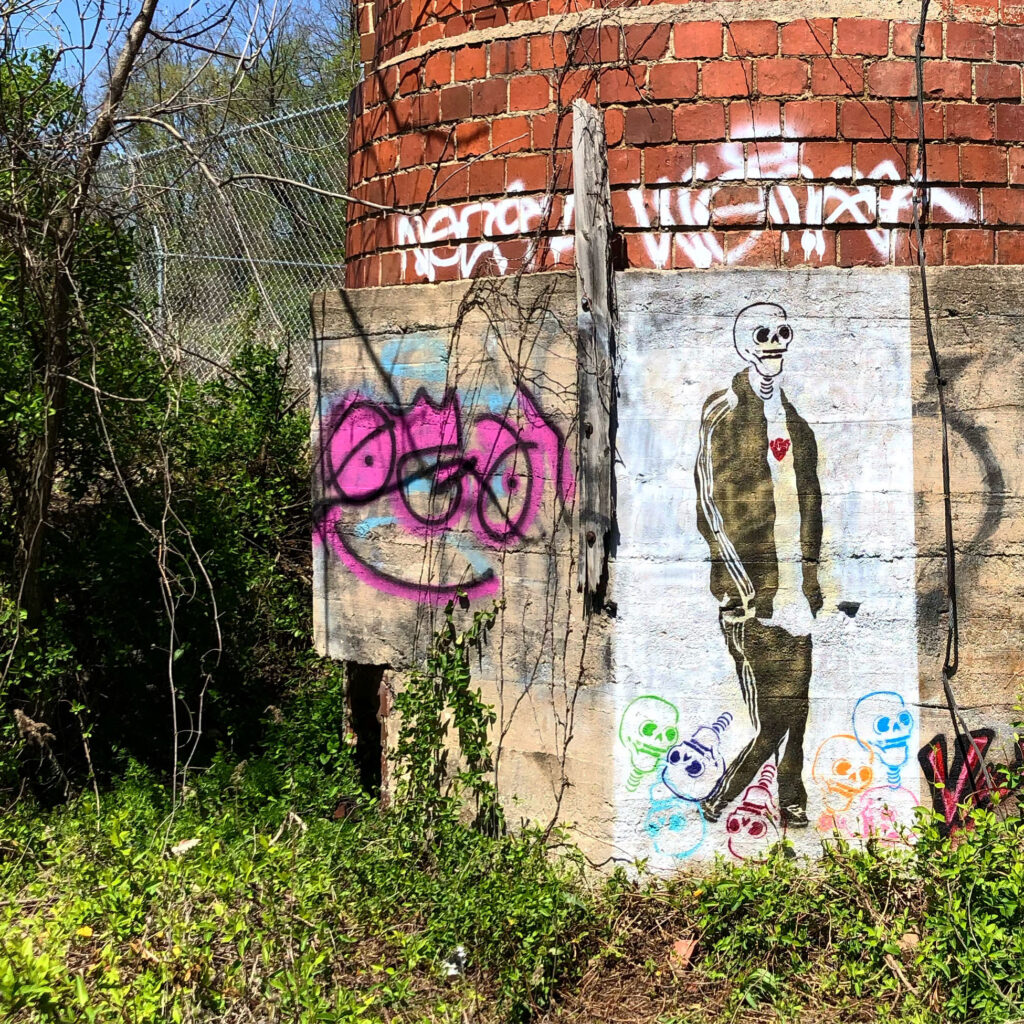 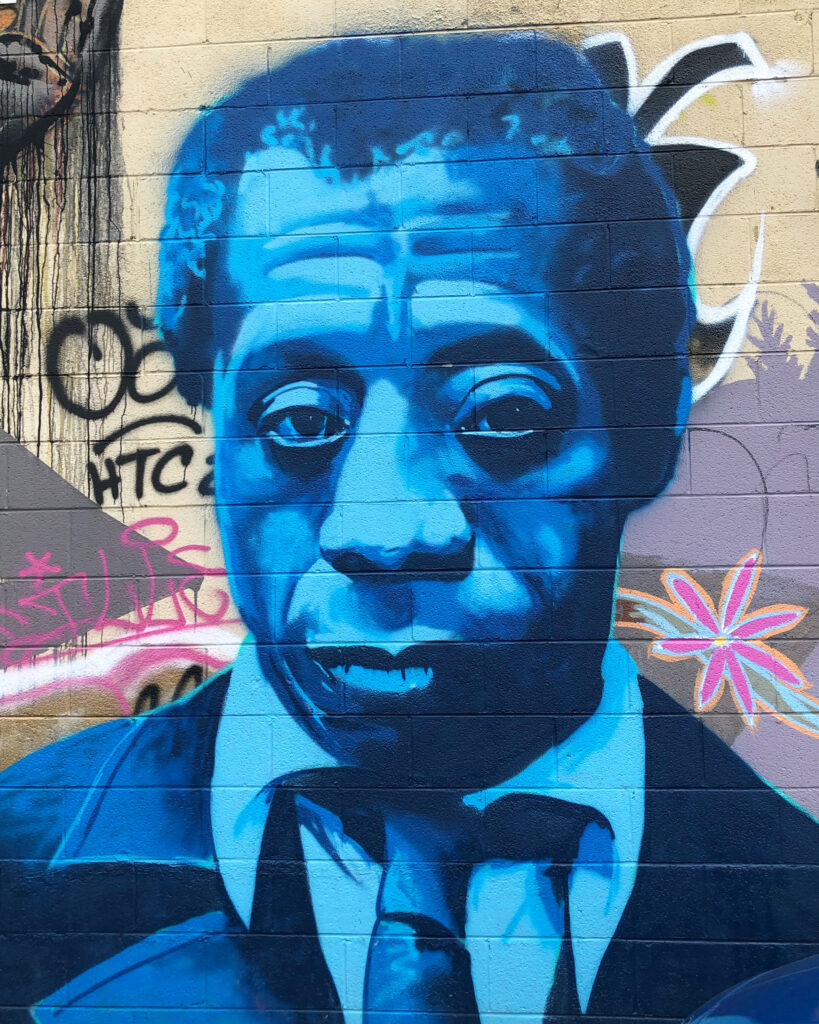 “Life is tragic simply because the earth turns and the sun inexorably rises and sets, and one day, for each of us, the sun will go down for the last, last time. Perhaps the whole root of our trouble, the human trouble, is that we will sacrifice all the beauty of our lives, will imprison ourselves in totems, taboos, crosses, blood sacrifices, steeples, mosques, races, armies, flags, nations, in order to deny the fact of death, the only fact we have. It seems to me that one ought to rejoice in the fact of death–ought to decide, indeed, to earn one’s death by confronting with passion the conundrum of life. One is responsible for life: It is the small beacon in that terrifying darkness from which we come and to which we shall return.”

The above quote is from Baldwin’s 1963 novel, The Fire Next Time.

The artwork above is by artist Jack Henry and is located in the River Arts District in Asheville, North Carolina. For more of his work, check out his website and Instagram. 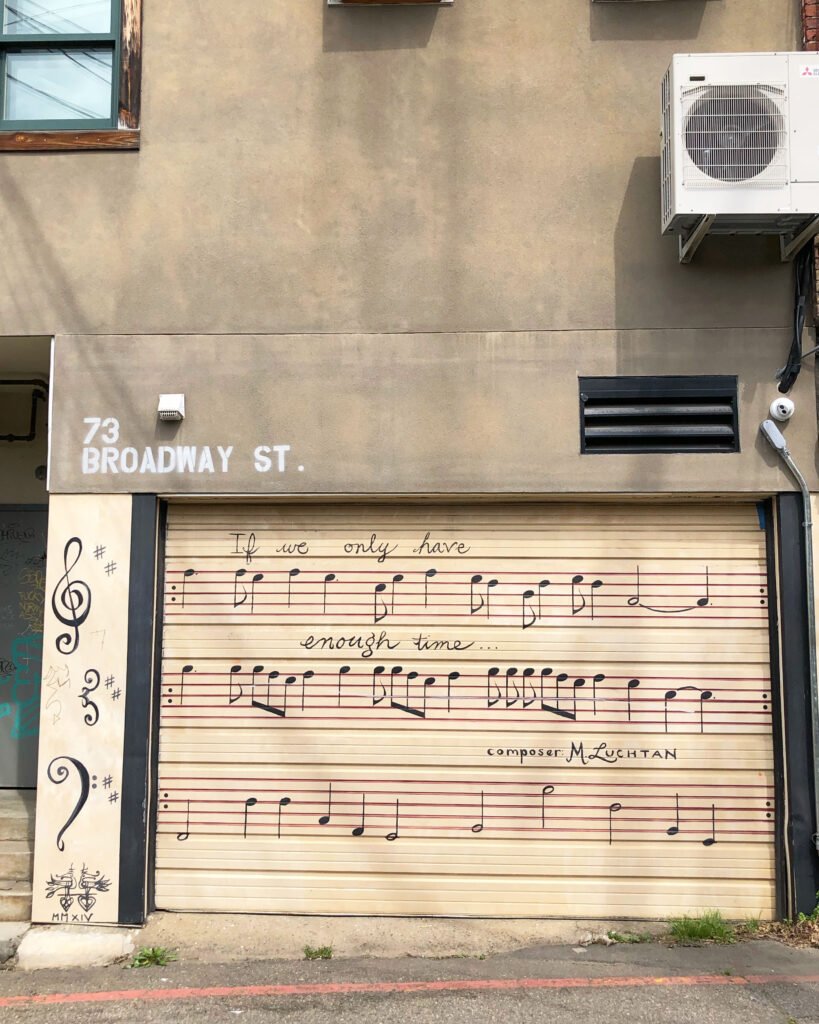 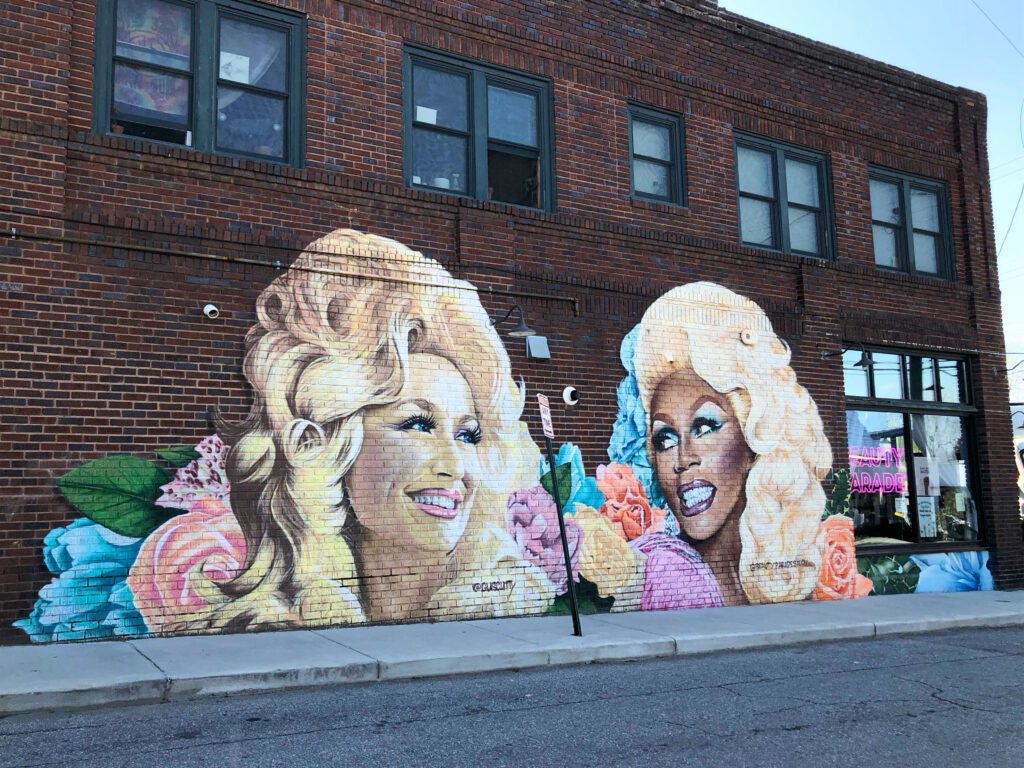 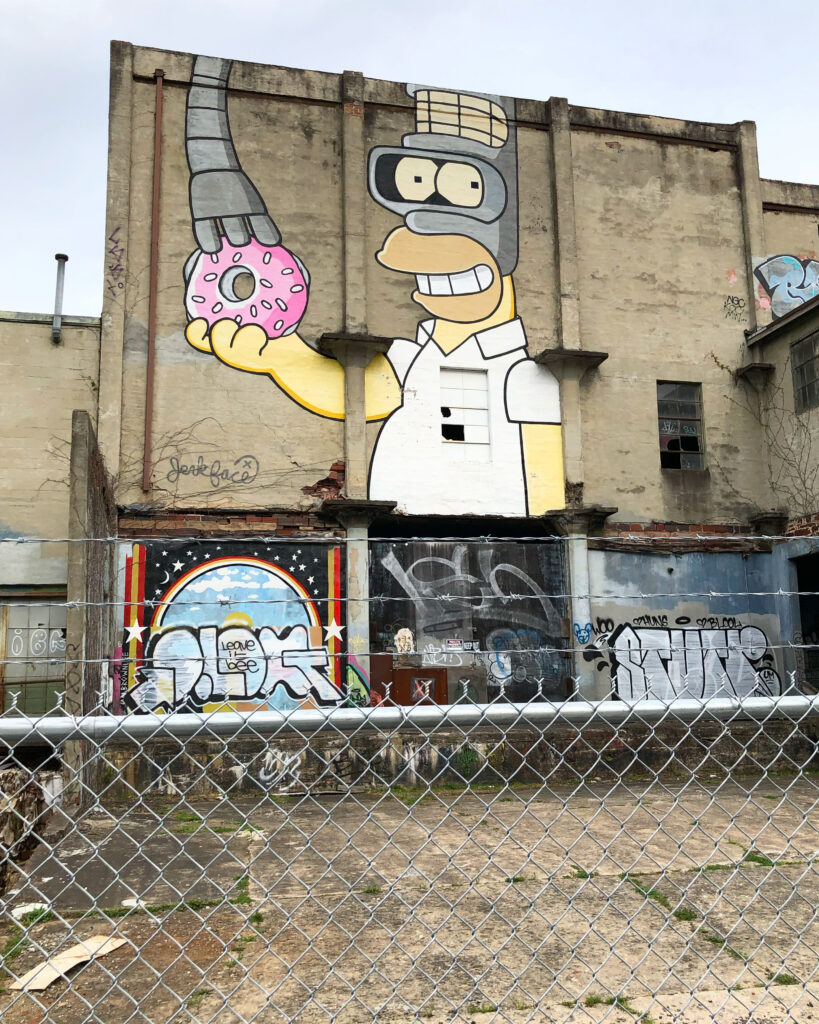 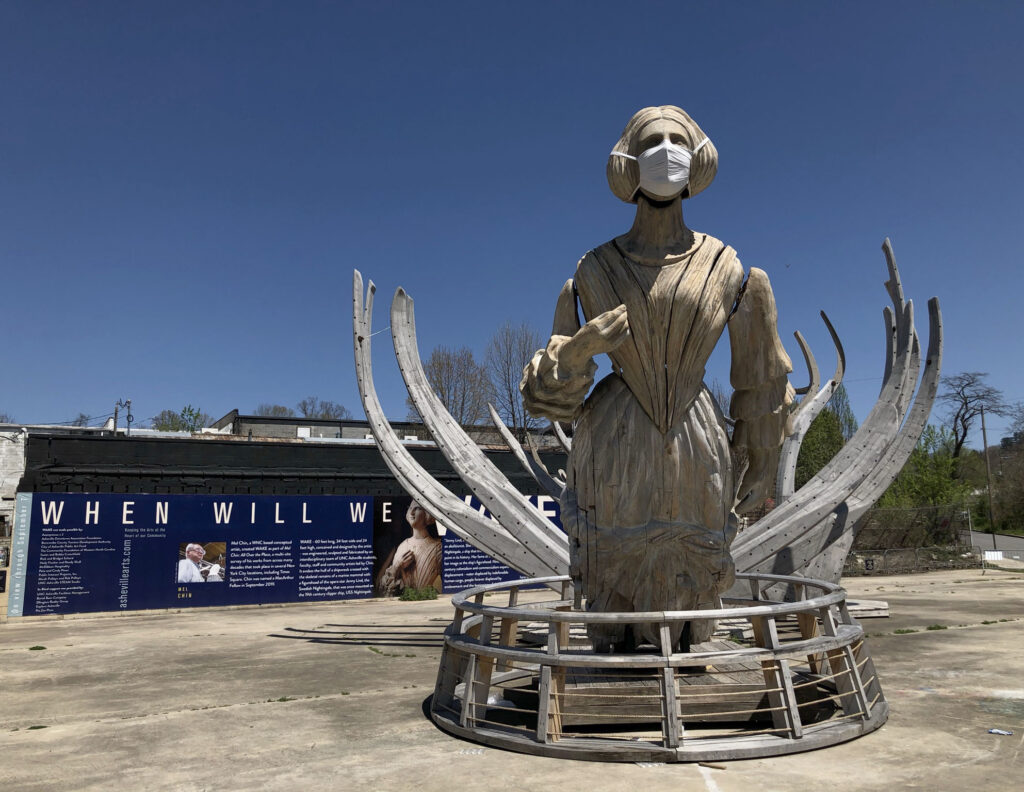 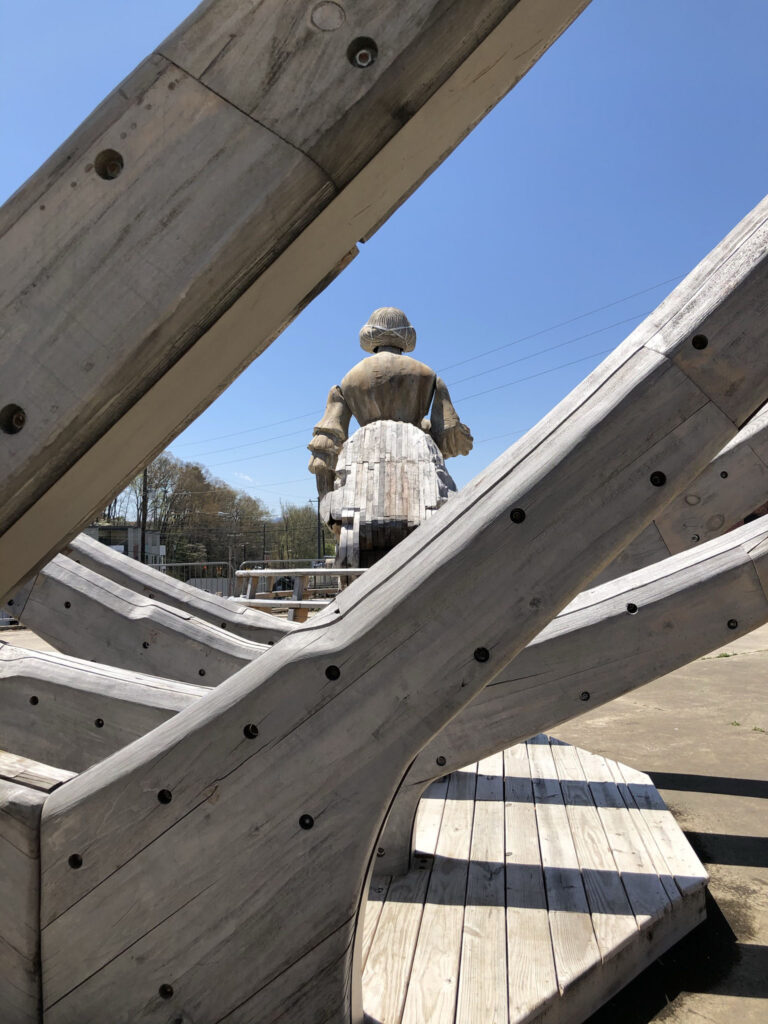 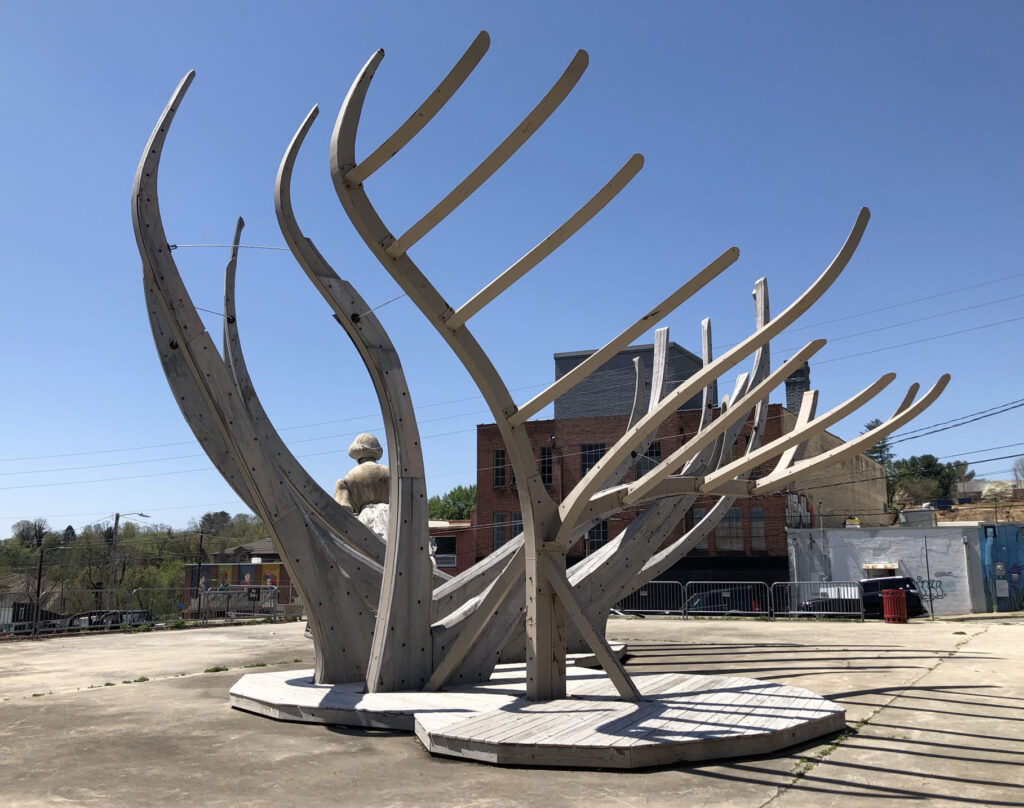 From The Community Foundation of Western North Carolina website-

Wake was commissioned as part of Mel Chin: All Over the Place, a multi-site survey of his works from across many decades that took place in several New York City locations. A collaborative group, led by UNC Asheville’s Steam Studio and CFWNC, formed to plan and raise funds for the sculpture to be seen locally.

Wake – 60 feet long, 34 feet wide and 24 feet high, conceived and designed by the artist – was engineered, sculpted and fabricated by an interdisciplinary team of UNC Asheville students, faculty, staff and community artists led by Chin. Wake is interactive and features decks and places to sit and contemplate.

Wake evokes the hull of a shipwreck crossed with the skeletal remains of a marine mammal. The structure is linked with a carved, 21-foot-tall animatronic sculpture, accurately derived from a figurehead of the opera star Jenny Lind that was once mounted on the 19th century clipper ship, USS Nightingale. Jenny Lind moves subtly as she breathes and scans the sky.

“She may be looking at what cannot be seen as she moves away from the wreckage of her past,” explained Chin. “It’s about relationships we have to history. It’s almost an obligation to understand our relationships with our environment now and an opportunity to project what things could be like far into the future if we’re not engaged.”

The artwork is not only a comment on climate change, it calls forth a history that includes ships, like the USS Nightingale and many other vessels, used to move tea, guns and slaves that augmented the nation’s burgeoning economy. “These expanding past economies serve as prologue and perhaps a warning to our current environmental dilemma,” said Chin.

“Wake is a powerful comment on how the tides of history have shaped many communities, including Asheville,” said Steph Dahl, who manages the City of Asheville’s Public Art Program. “The piece asks us to acknowledge and discuss a long and complicated past, one that has left us operating in a sea of racial inequities and environmental crises. Wake’s temporary presence in an empty lot where the history and future of the Southside and South Slope meet is part of its power, and its impermanent nature underscores some of the tough questions we need to address together.

“Jenny Lind was the Beyoncé or Adele of her time,” said Chin. “She was brought by P.T. Barnum to tour America as the Swedish Nightingale. Barnum initiated American mass marketing and the world still lives in the real wake of this marketing enterprise. American commercialism provided profound advancement and wealth, but it came with real costs including colonialism, enslavement and rapid expansion. Jenny Lind, an abolitionist herself, had nothing to do with the USS Nightingale, but as its figurehead, she is an integral part. You can’t escape the web you’re in whether you are in New York City or Western North Carolina.”

Since the late 90’s Chin has lived and worked in Egypt Township, outside of Burnsville in Yancey County, North Carolina. His work has been exhibited by major art centers nationally and globally. He is described in his MacArthur entry as “a category-defying artist whose practice calls attention to complex social and environmental issues. In an expansive body of work ranging from collages, sculptural objects, animated films and video games to large-scale, collaboratively produced public installations, Chin demonstrates a unique ability to engage people from diverse backgrounds and to utilize unexpected materials and places.”