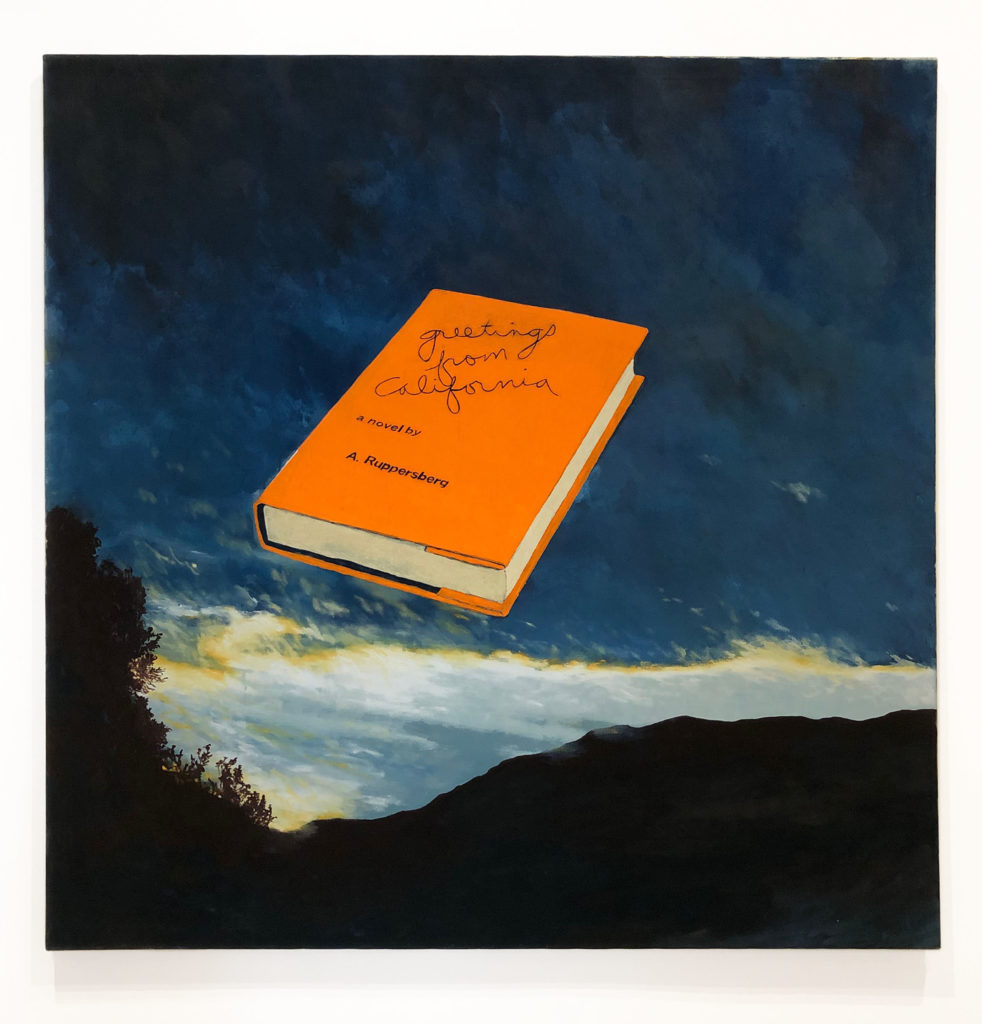 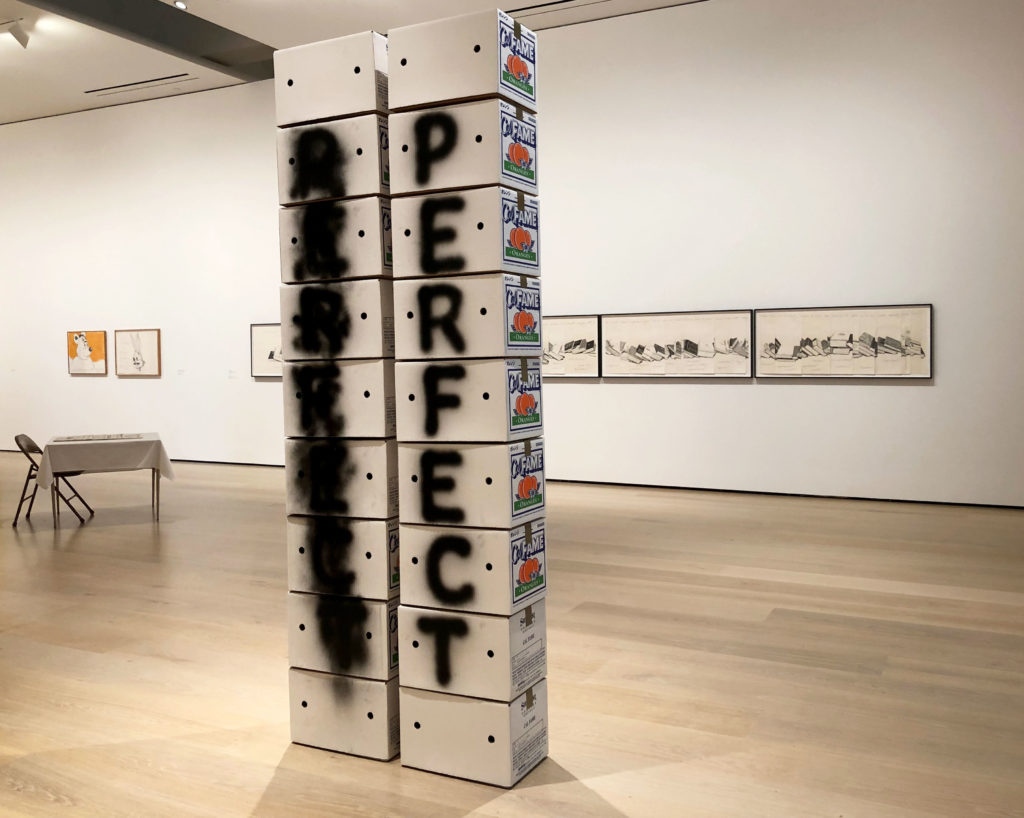 Hammer Museum’s current exhibition Allen Ruppersberg: Intellectual Property 1968-2018 is a fascinating and fun look at the work of the Conceptual artist. Walking through the show, the variety of the work and the artist’s sense of humor keep the exhibition engaging from start to finish.

Much of Ruppersberg’s work created in Los Angeles is specific to the city, especially how it was during the late 1960s and early 1970s.  The contrast between the urban city life and the natural surroundings of mountains, desert and beach can be seen in several of his pieces including the “Location Pieces”. For “Al’s Cafe”, he created a restaurant in downtown LA where everything from the menus, receipts, and tongue-in-cheek dishes, was a work of art. Examples of the “meals” include “Rock Varieties Smothered in Pine Needles” and the “Patti Melt”, a studio photo covered in toasted marshmallows. He later went on to create “Al’s Grand Hotel” which consisted of several rooms of various themes, run by the artist. For a little over a month of weekends, guests came to stay overnight. Like his restaurant, the hotel became a meeting place for the Los Angeles arts community. 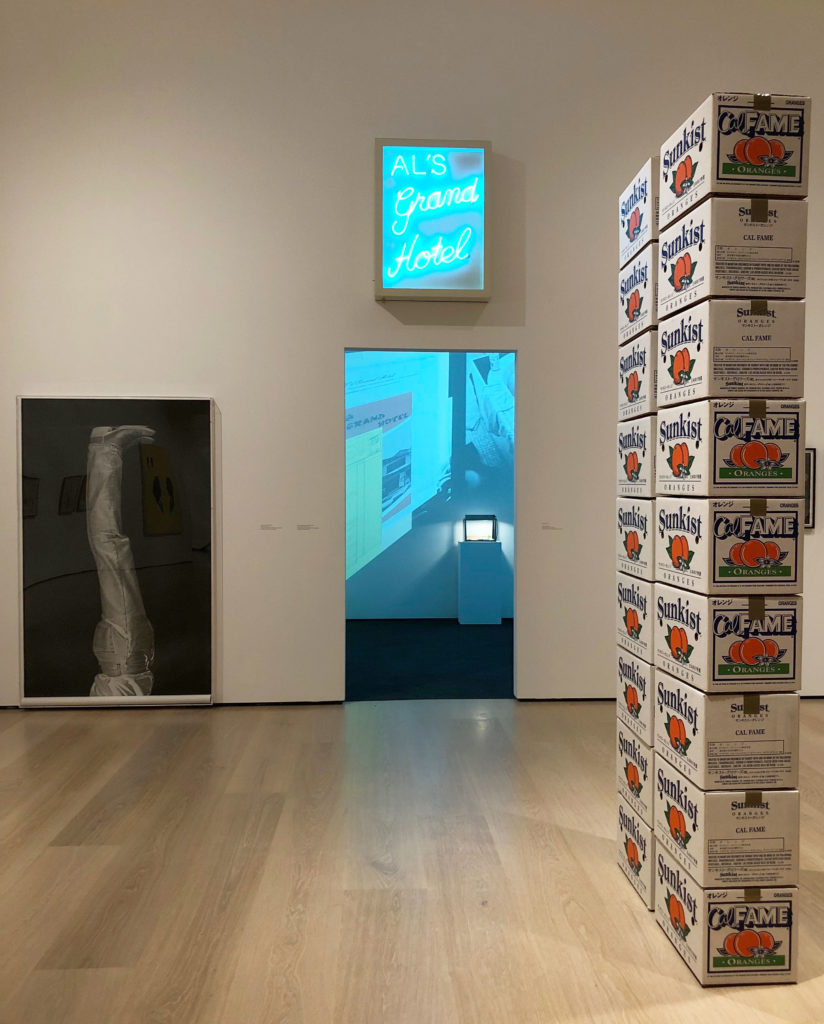 Language and the printed word play a very important in Rupperberg’s work. He rewrote Oscar Wilde’s novel The Picture of Dorian Gray on several large canvases that take up an entire room in the show. For a series of paintings he recreated newspaper articles of strange crimes and then wrote comments on the canvas “translating” them. 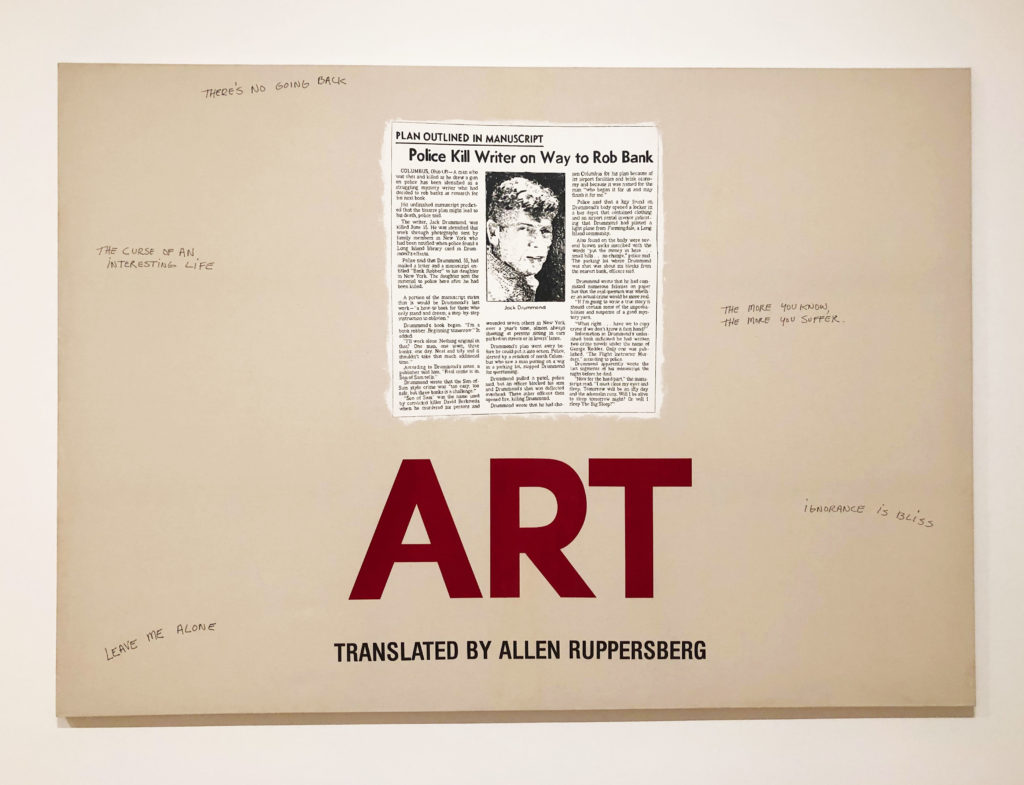 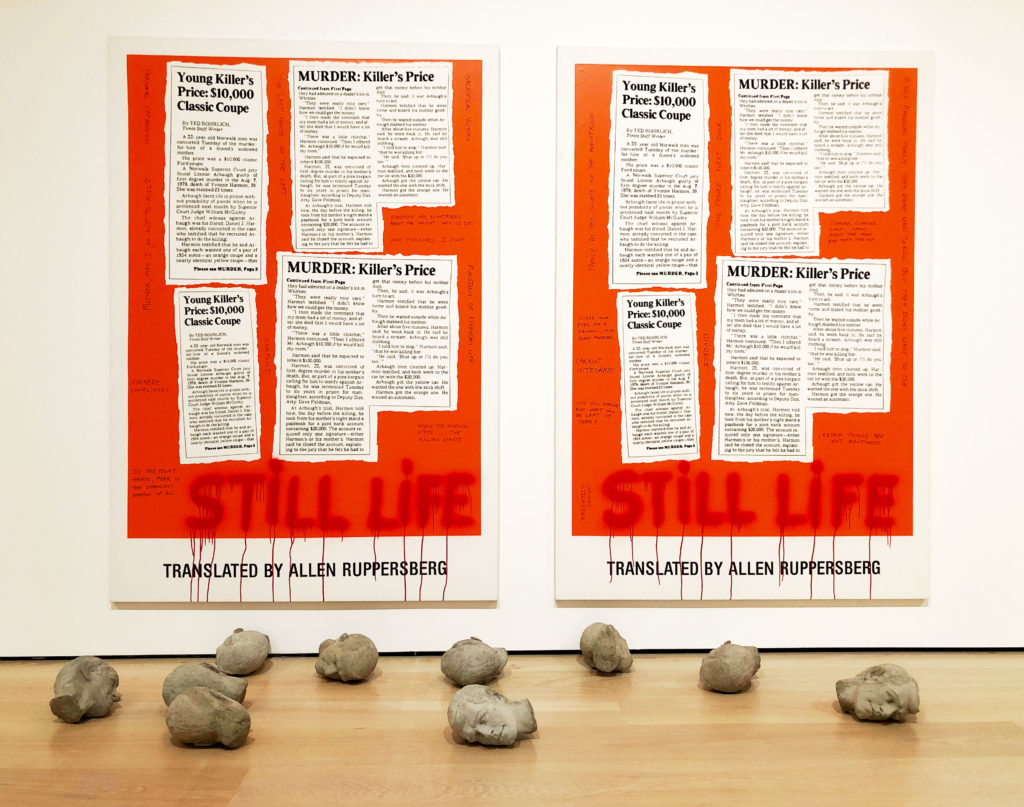 Driving around Los Angeles he noticed the ubiquitous DayGlo posters made by Colby Printing and used them to print The Singing Posters: Allen Ginsberg’s Howl by Allen Ruppersberg (Parts I-III). For this work the poem is recreated phonetically in a series of these posters, along with some commercial advertising posters, and placed together to form a large mural. 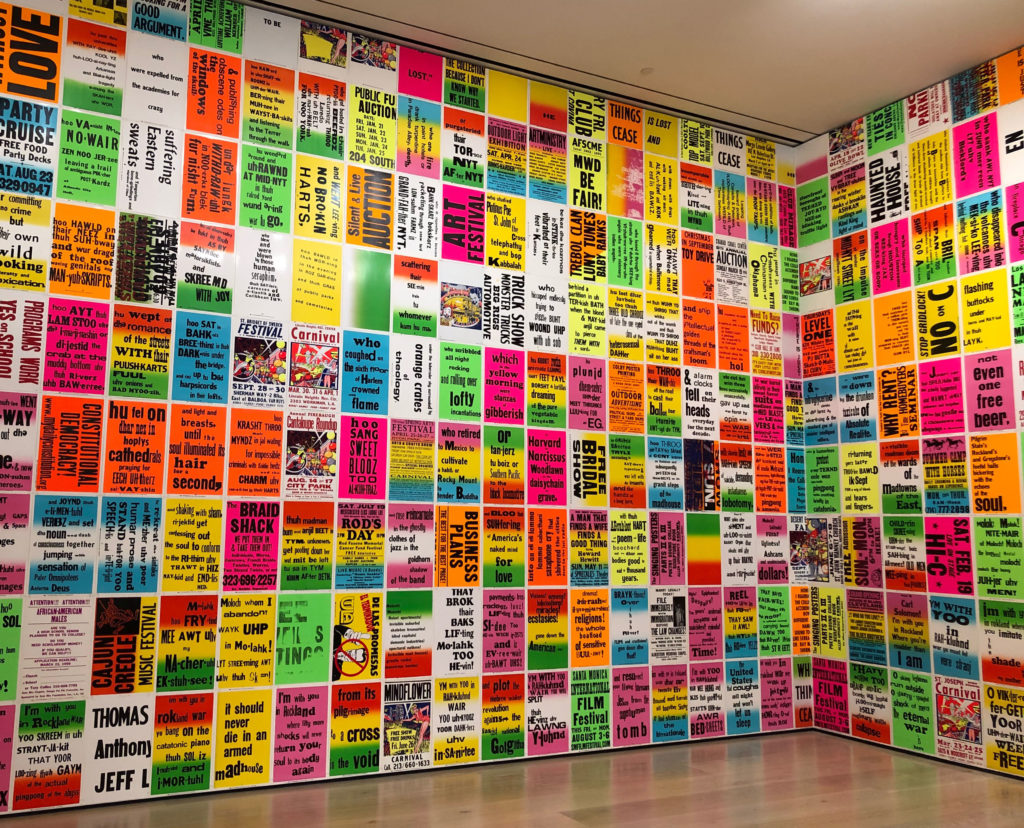 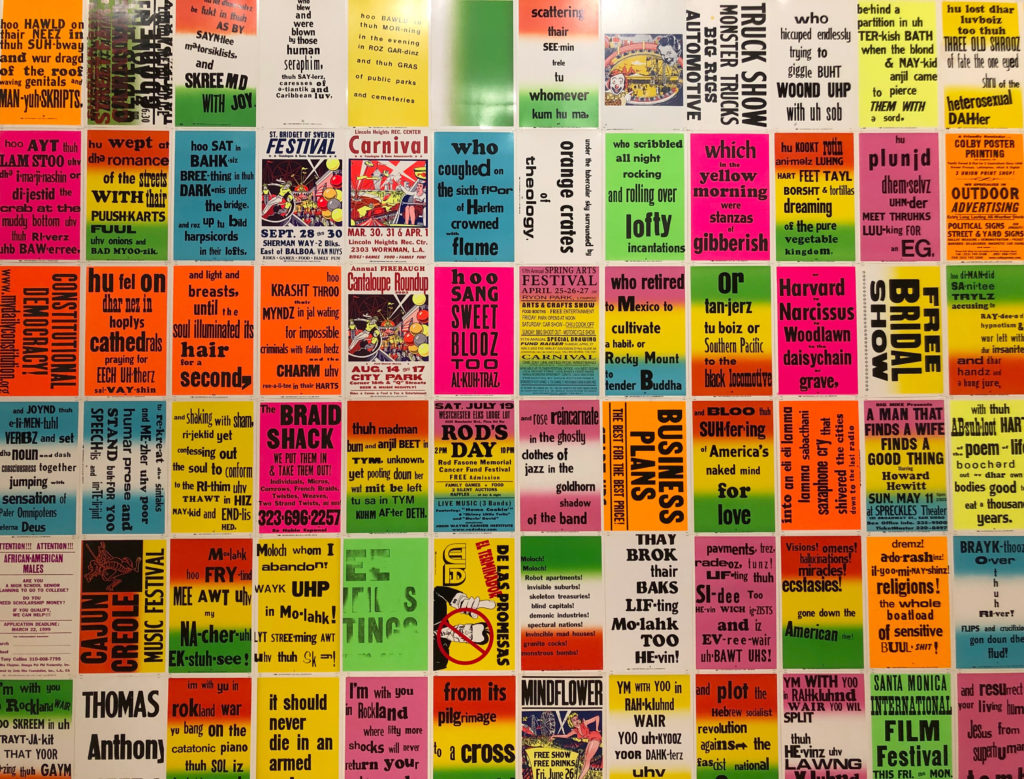 Ruppersberg is still creating, collecting, and exploring the world around him. This show celebrates his unique perspective while also presenting a glimpse of what it was like to be an artist in Los Angeles at the time he was making this work.