Moaning are playing a free (with RSVP) show at Moon Room

Hammer Museum is hosting The How and Why of Political Advertising, with LMU professor Fernando Guerra and campaign strategist John Thomas joining moderator and Loyola Law School professor Jessica Levinson to break down the politics and law behind campaign spending and advertising.

Brazilian artist Sessa is playing at Zebulon with SK Kakraba

Hammer Museum is having a free screening of the film Moonlight

Bat for Lashes is performing at The Theatre at Ace Hotel

Saintseneca are opening for Murder by Death at the Regent Theater

The Aero Theatre is showing Casablanca for Valentine’s Day

The Geffen Contemporary at MOCA is hosting Brutally Early (it starts at 7:30am)- a free morning of conversations with artists including- Simone Forti, Kandis Williams, Shirin Neshat, Miles Brenninkmeijer, Patrick Staff, Rodney McMillian, and choreographers Gerard & Kelly- hosted by Hans Ulrich Obrist and Klaus Biesenbach (in addition, it begins with coffee and donuts and ends with champagne and ice cream)

As part of  The Broad’s Un-Private Collection conversation series, artists Christopher Wool and Kim Gordon will be speaking with critic and curator John Corbett

If you are a fan of ambient music, Malcolm Cecil will be performing at the Pasadena Presbyterian Church with Cool Maritime and Yialmelic Frequencies opening

For the last day of Phillip K. Smith III’s exhibition at Bridge Projects there will be a day of activities including a soundscape by William Basinski, a relaxation workshop, and a tea tasting as part of their Oasis programming (also on Saturday)

Lucy Arnell, Nico Yaryan and more are performing as part of a Benefit for Australia at Permanent Records Roadhouse

StARTup LA Art Fair returns to The Kinney Venice Beach on Friday evening. It is one of the better art fairs as it offers a chance to meet the artists (who take over rooms in the hotel) and buy from them directly

Felix Art Fair returns to the Roosevelt Hotel (opening night Thursday). Although last year it was free, this year tickets are $25 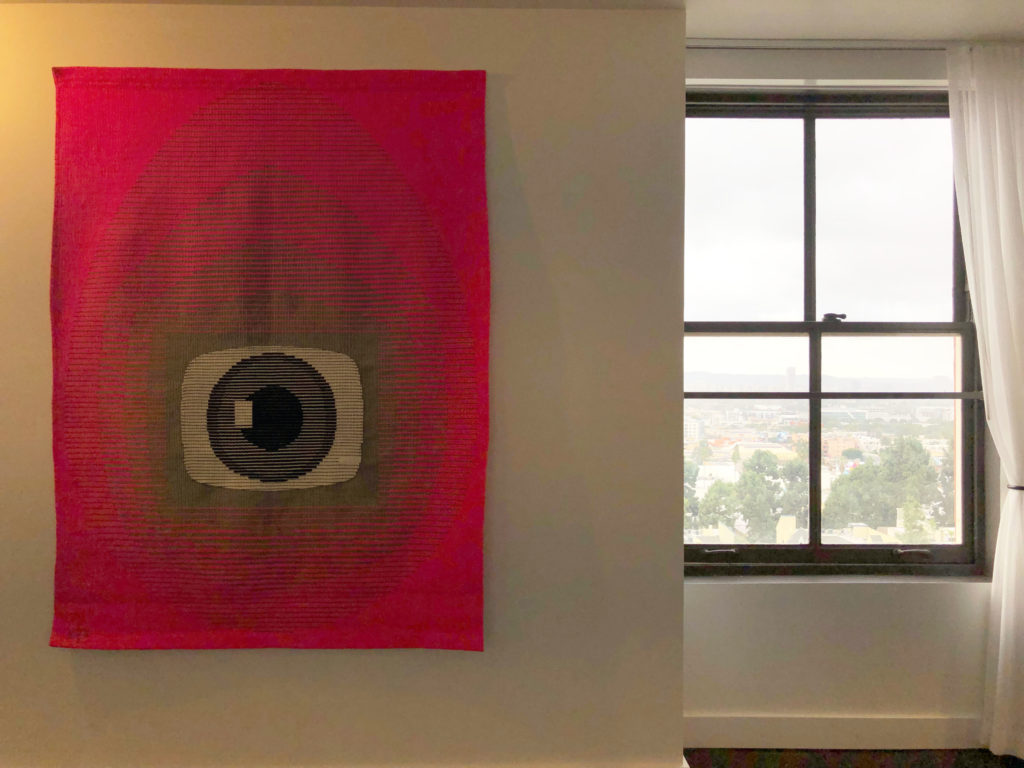 At the The Hollywood Roosevelt was the first edition of Felix, a free art fair co-founded by Dean Valentine along with brothers Al Morán and Mills Morán (of LA gallery Morán Morán). Galleries took over rooms along the pool, on the 11th floor, and the penthouse.  Starting at the penthouse was The 13th Floor (pictured above), a collection of work by French artists curated by writer Andrew Berardini and presented by The French Committee of Art Galleries and the Cultural Services of the French embassy. 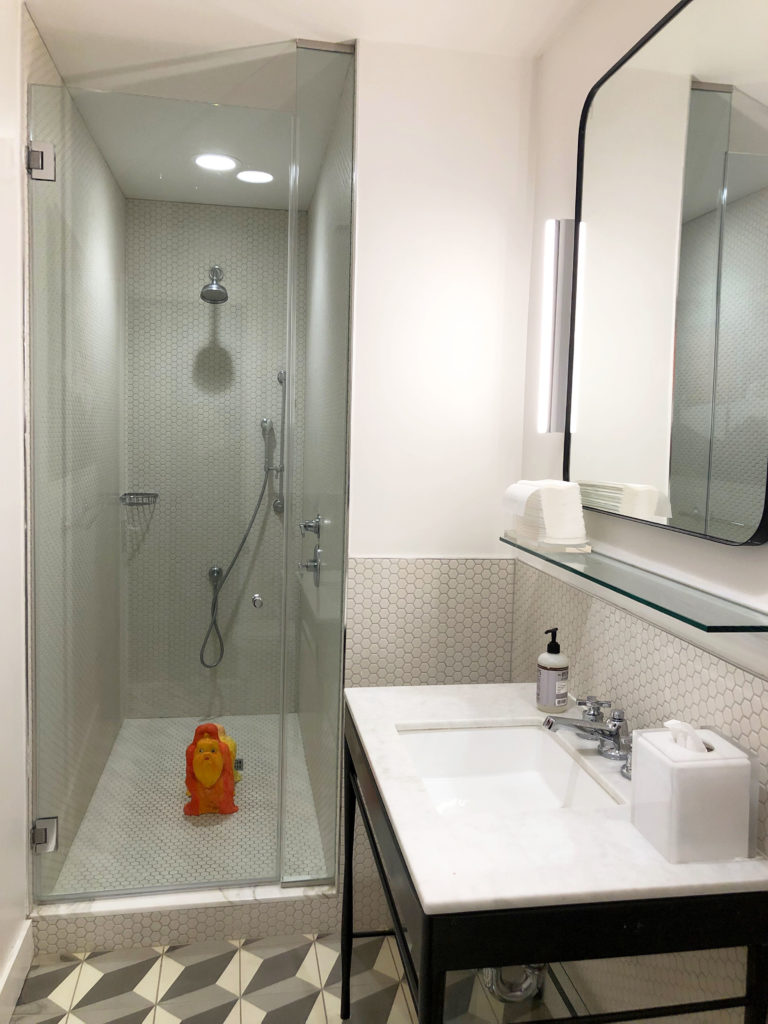 Kenny Schachter had some fun pieces in his room on the 11th Floor including Ilona Rich’s sculptures, one of which was in the bathroom shower (pictured above), and a framed collection of artist Chris Burden’s cancelled checks.

Bodega gallery, from New York’s Lower East Side, had a selection of interesting work including paintings by Alexandra Noel. 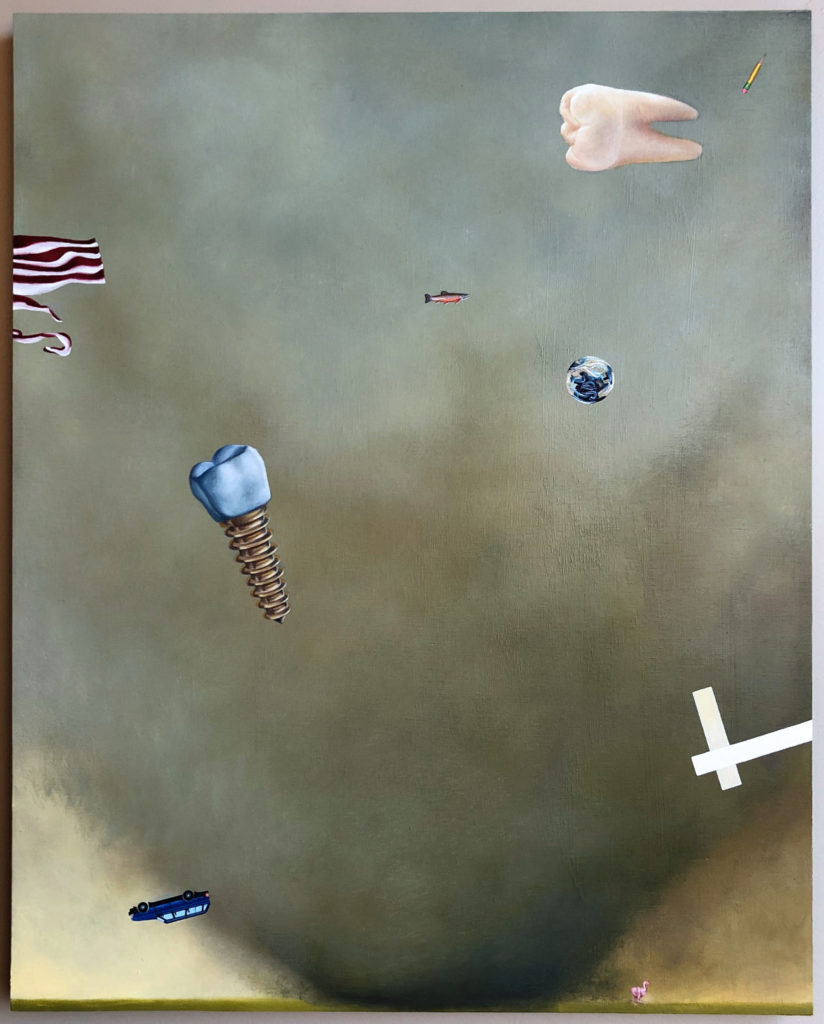 Alexandra Noel, “And then the air was filled with 10,000 things (or when a minor piece of wood becomes a missile)”

Grice Bench’s selections included a collection of lovely watercolors by Roger White and a painting placed above the bed by Lara Schnitger. 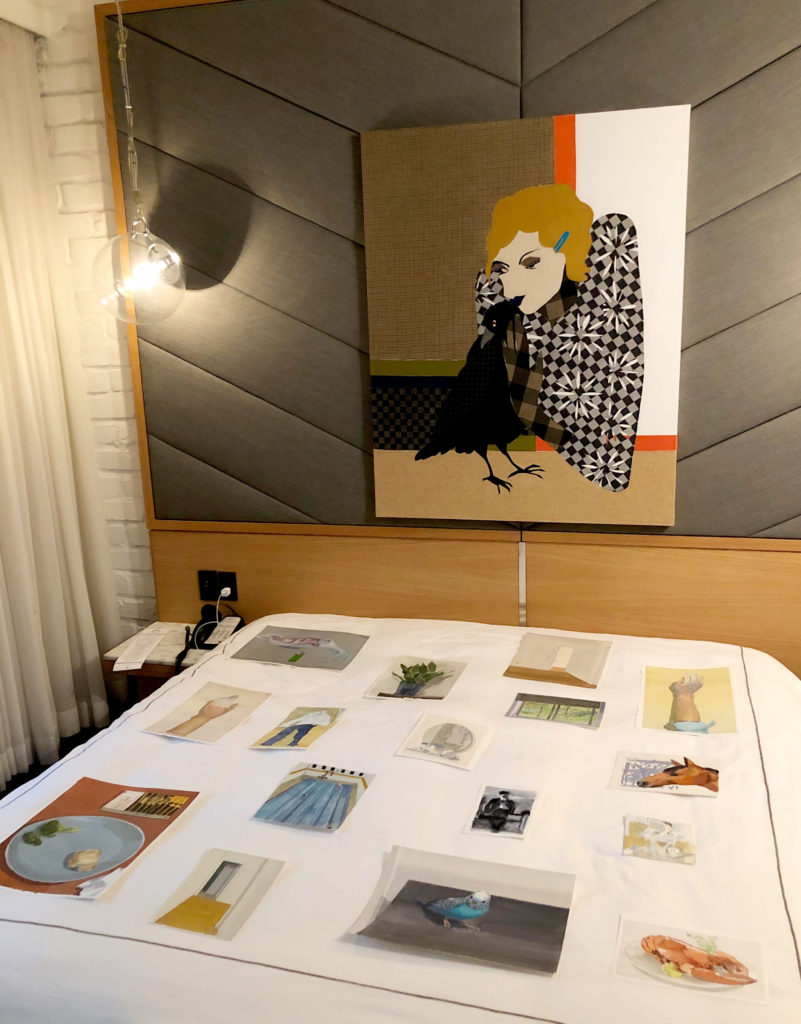 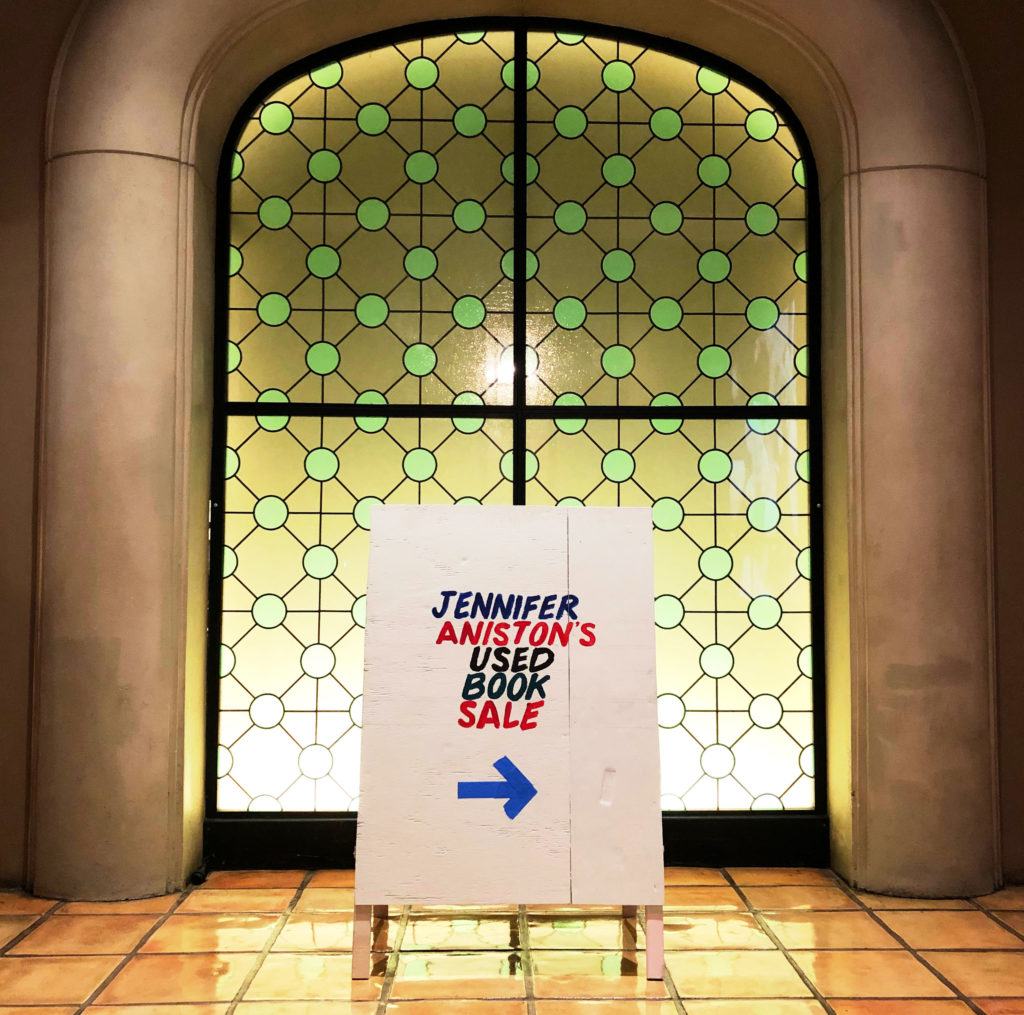 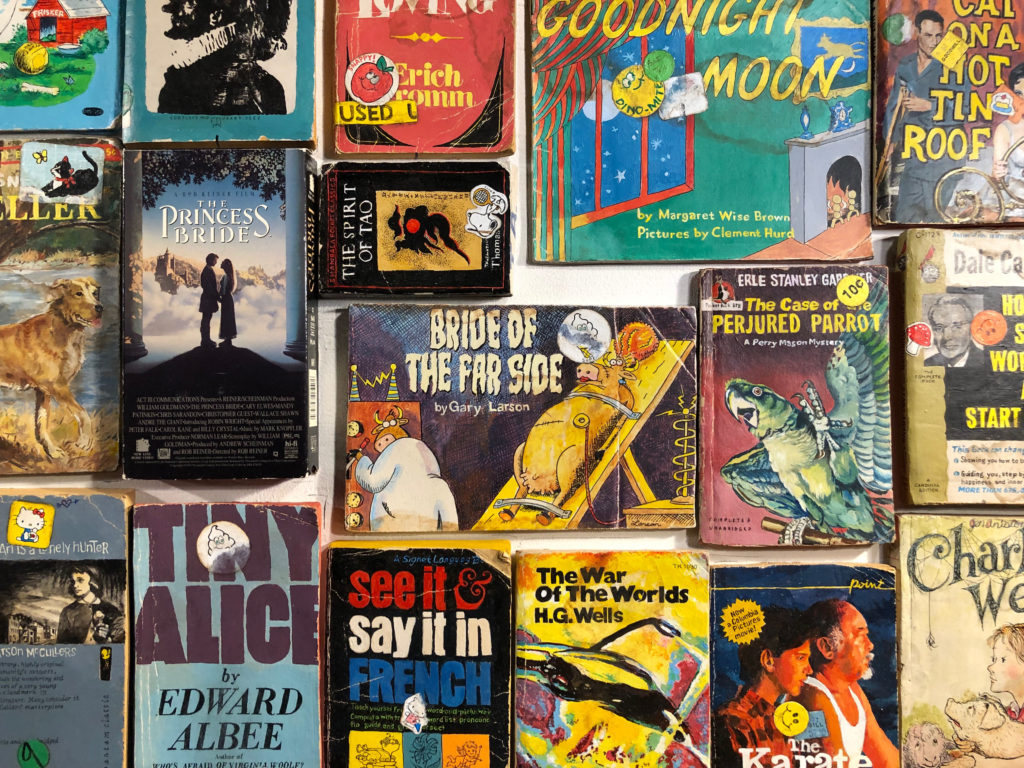 At a hotel in a completely different part of town was the stARTup Art Fair, taking place at The Kinney in Venice. Here, instead of galleries representing the artists, it’s the artists that set up their rooms and sell their art.  It made for a great experience as the artists were all very friendly and eager to discuss their work. Below are a few highlights from the fair. 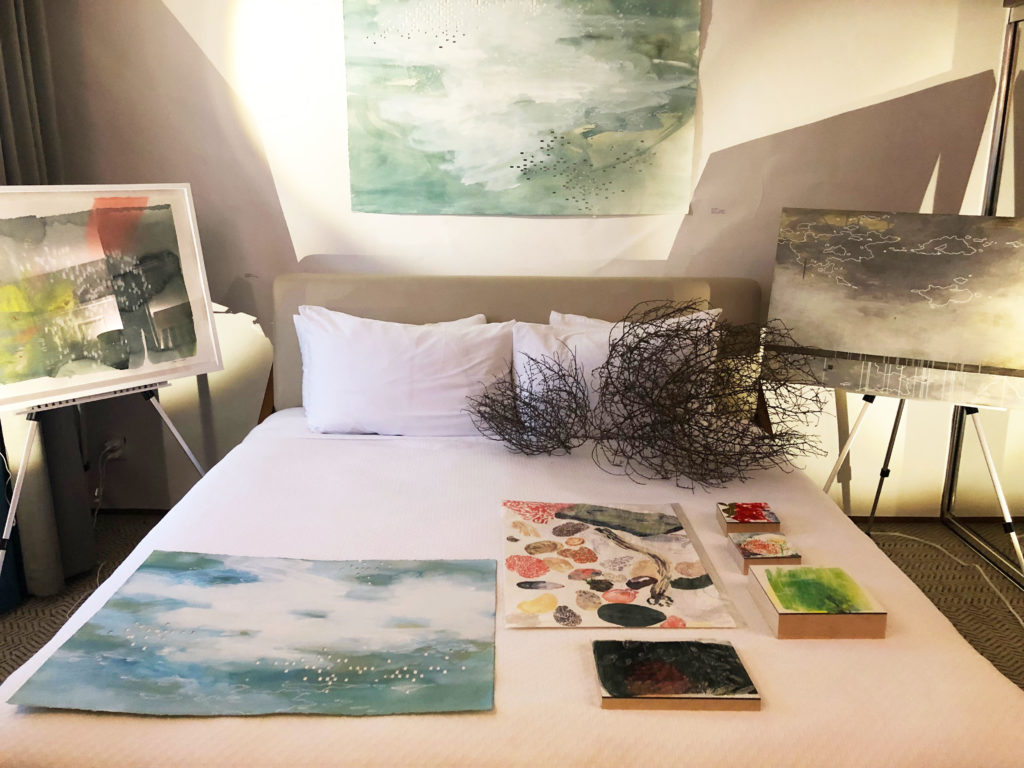 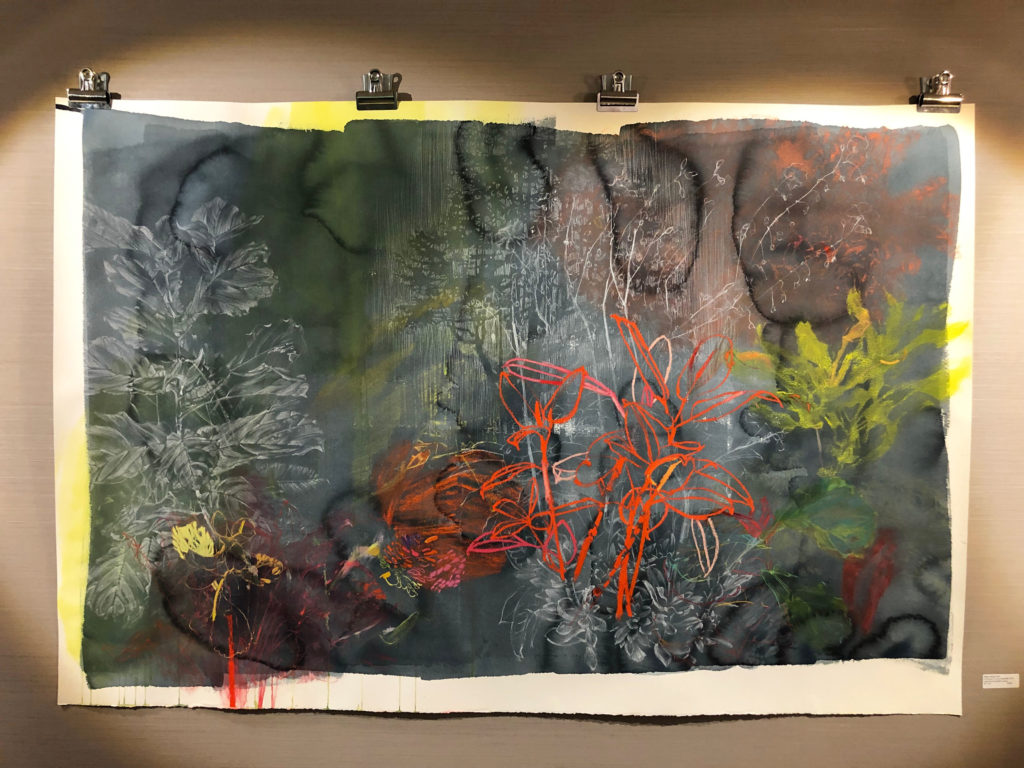 San Francisco artists Lisa Kairos and Melissa Mohammadi’s room was filled with really beautiful work. Kairos makes dreamy multilayered paintings based on natural landscapes. She then cuts patterns into the images which adds yet another dimension to the paintings. Mohammadi’s work incorporates botanical and marine life into a meditative world where bright pastels stand out among subdued watercolor backgrounds; highly detailed sections mix with the more abstract. The end result for both artists is work you want to spend time looking at. 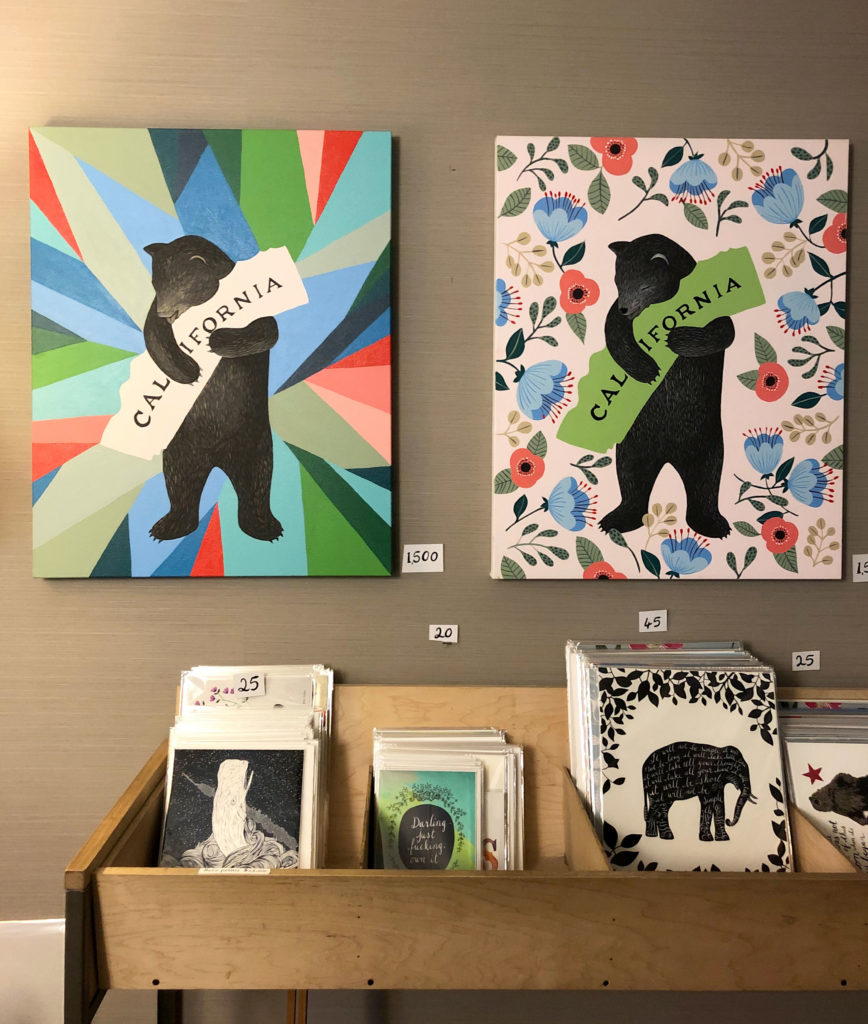 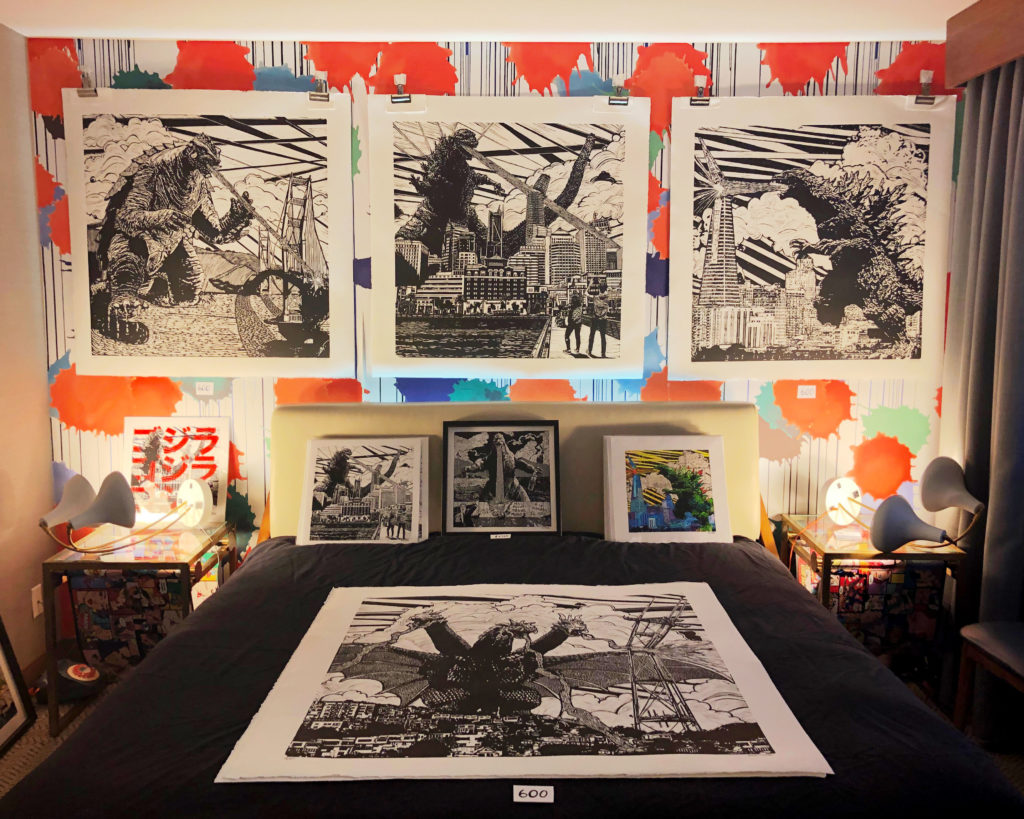 Husband and wife artists Eric Rewitzer and Annie Galvin of 3 Fish Studios in San Francisco had lots of great, affordable prints. They also teach printmaking and collage classes in their studio. 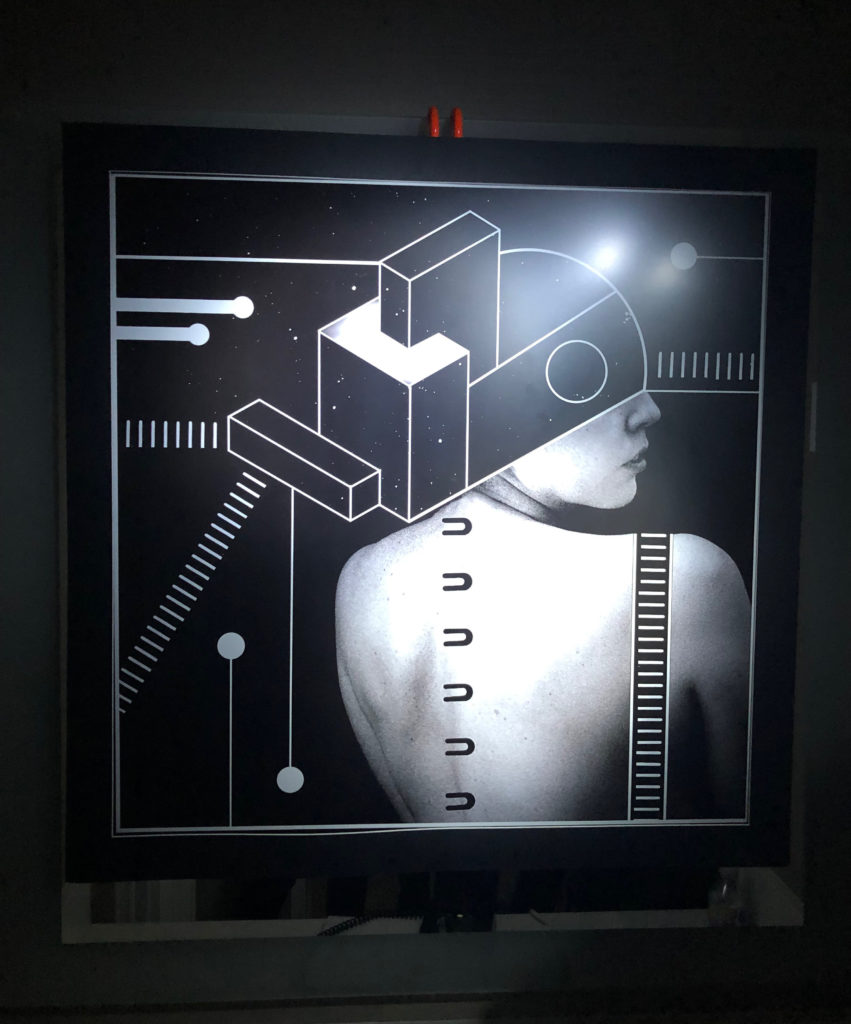 One of Camilla Magrane’s artworks

Artist Camila Magrane had several pieces in her darkened hotel room that use augmented reality technology to make the works animated and three dimensional when looked at through her Virtual Mutations app. The video above illustrates the effect. 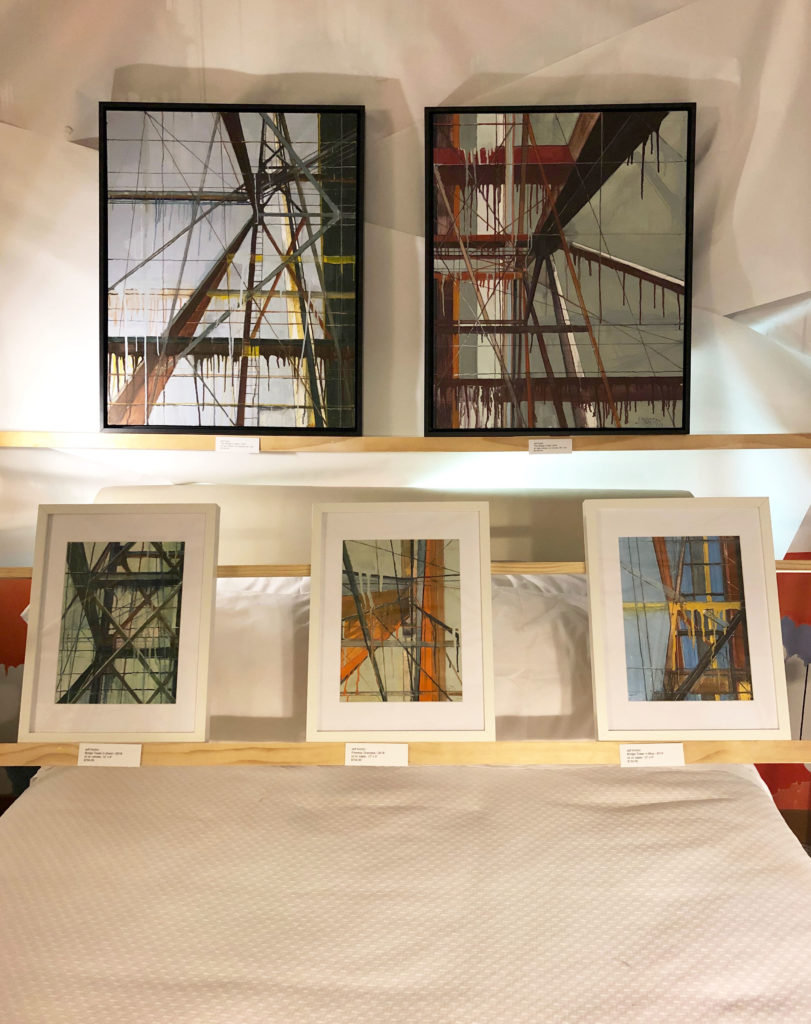 Jeff Horton uses his architecture background to create paintings of urban structures (often larger than what’s pictured above), some of which incorporate wax with oil paint for an added layer.

Other artists work not shown but worth checking out- Margaret Hyde makes ethereal still life photographs of natural objects she finds and combines with water, and Kyong Ae Kim showed a variety of impressive work including her animal skulls cut from multiple layers of drafting film and acrylic paintings combined with hand cut elements.