Sir Sly are playing the El Rey Theatre with PAPA

For MOCA’s free (but RSVP) music night at The Geffen Contemporary location- the bands are Surf Curse, Tacocat and Starcrawler

At MOCA’s Grand Avenue location, photographer Deana Lawson will be discussing the work of Kerry James Marshall for the Artists on Artists series (free)

For this week’s Oracle Film Series at The Broad, Claire Denis’ film Beau Travail will be shown along with Rineke Dijkstra’s short Annemiek ($10)

Bedouine is playing at the Bootleg Theater with CHIMNEY opening

For the last of the Constitutional Happy Hour programs at The Hammer Museum, the topic is hate speech

For the first DJ Night in Grand Park, Peanut Butter Wolf will be performing along with other DJs he has chosen

Junior Boys, Kilo Kish, How to Dress Well and Chrome Sparks (DJ set) are playing at the Globe Theatre

Meatbodies and Feels are playing at the Teragram Ballroom

For the first of Chinatown’s Summer Nights there are artisan and culinary presentations, a craft and vintage market, a beer garden, a live music stage and more. Plus there are some excellent art galleries nearby worth checking out.

Deap Vally, Plague Vendor, The Red Pears, Zig Zags, Flat Worms and many more are playing the all day Dirty Penni Fest at The Echo and Echoplex

The Egyptian Theatre is showing Jaws

LACMA is having a free screening of Breakable You, starring Holly Hunter and Alfred Molina, with a conversation with director and writer Andrew Wagner to follow

Rubblebucket are playing with Sego and Alexander F at the Troubadour

Björk Digital, which includes six Virtual Reality experiences, begins today at the Magic Box at The Reef. Tickets are going fast. ($35 and running until 6/4)

The Jesus and Mary Chain are playing at The Wiltern

Off the 405, The Getty’s free music night, is back for the next few Saturdays- this week Nite Jewel is performing

KROQ is having its Weenie Roast y Fiesta 2017 at the Stub Hub Center in Carson, with Lorde, Imagine Dragons, Cage the Elephant, Lana del Ray and more performing

It’s Museums of the Arroyo Day during which The Gamble House, Heritage Square, L.A. Police Museum, Lummis Home, Pasadena Museum of History, and The Autry are all free from noon to 5pm

Inhalt, Kontravoid, and Boan are bringing their retro electronic sounds to Part Time Punks night at the Echoplex

Artist Kerry James Marshall will be in conversation with Helen Molesworth at the Colburn School (200 South Grand Avenue) which will include discussion of his MOCA exhibition (free but get there early!)

Angel City Brewery is hosting the opening of “What Does DTLA Mean to You?” an exhibition showcasing the work of artists from the Arts District and Skid Row

Drill Los Angeles Music Festival at the Echo and Echoplex begins tonight with 3 day passes starting at $46.50, or you can buy tickets for the individual shows. Tonight Bob Mould is playing with Immersion and Alina Bea.

Hammer Museum is hosting a free panel discussion- The Not So Silver Screen: Black Women in Media with actress Diahann Carroll, actress and director LisaGay Hamilton and more

Kane Strang, Tracy Bryant, and Emily Edrosa are playing at the Bootleg Theater

Generationals are playing at the Teragram Ballroom

Mikal Cronin is playing with a string & horn ensemble as part of Drill Los Angeles at the Echo. Wand, Laetitia Sadler, Fitted, and more are also on the bill

The Aero Theatre is showing 2001: A Space Odyssey with a brand new 70mm print

Why? are playing at the Regent Theater with Open Mike Eagle and Rituals of Mine

Meatbodies are opening for Delicate Steve at the Teragram Ballroom

For the last night of Drill, Wire will be performing at the Echo as well as Julia Holter, Mild High Club and more.

CAFAM is hosting- Social (Media) Politics of Photography in the Digital Age- A Discussion with Arpad Kovacs & Ramin Talaie for “Focus Iran 2: Contemporary Photography and Video”. This is a good opportunity to check out that exhibition as well as Chapters, which includes a great variety of the book arts of Southern California. CAFAM is pay what you wish on Sunday but RSVP for the talk if you are interested.

Black Joe Lewis & The Honeybears are playing at the Troubadour 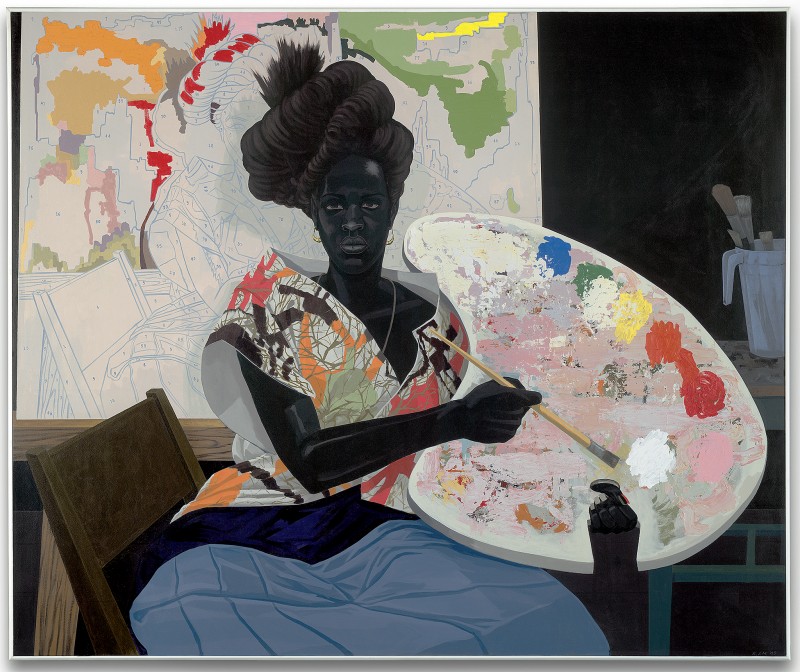 This is the last weekend to see Kerry James Marshall:Mastery at Met Breuer in New York, definitely one of the best exhibitions I saw in 2016.

Here is Met Breuer’s overview of the exhibition-

This major monographic exhibition is the largest museum retrospective to date of the work of American artist Kerry James Marshall (born 1955). Encompassing nearly 80 works—including 72 paintings—that span the artist’s remarkable 35-year career, it reveals Marshall’s practice to be one that synthesizes a wide range of pictorial traditions to counter stereotypical representations of black people in society and reassert the place of the black figure within the canon of Western painting.

Born before the passage of the Civil Rights Act in Birmingham, Alabama, and witness to the Watts rebellion in 1965, Marshall has long been an inspired and imaginative chronicler of the African American experience. He is known for his large-scale narrative history paintings featuring black figures—defiant assertions of blackness in a medium in which African Americans have long been invisible—and his exploration of art history covers a broad temporal swath stretching from the Renaissance to 20th-century American abstraction. Marshall critically examines and reworks the Western canon through its most archetypal forms: the historical tableau, landscape and genre painting, and portraiture. His work also touches upon vernacular forms such as the muralist tradition and the comic book in order to address and correct, in his words, the “vacuum in the image bank” and to make the invisible visible.

The exhibition runs concurrently with Kerry James Marshall Selects, a room curated by Marshall, of work from the Met collection “ranging from the Northern Renaissance to French post-Impressionism, and from African masks to American photography of the 1950s and ‘60s, underscoring the global and historical nature of the influences that are predominant in his practice”. This is a wonderful addition that adds another layer of perspective to the work.

Taking up two floors of the building, and with work that is often filled with detailed imagery, make sure to leave enough time to take it all in.

For more information on the artist, this New York Times article discusses the retrospective, the artist’s history, and includes quotes from an interview the author had with Marshall in his studio.