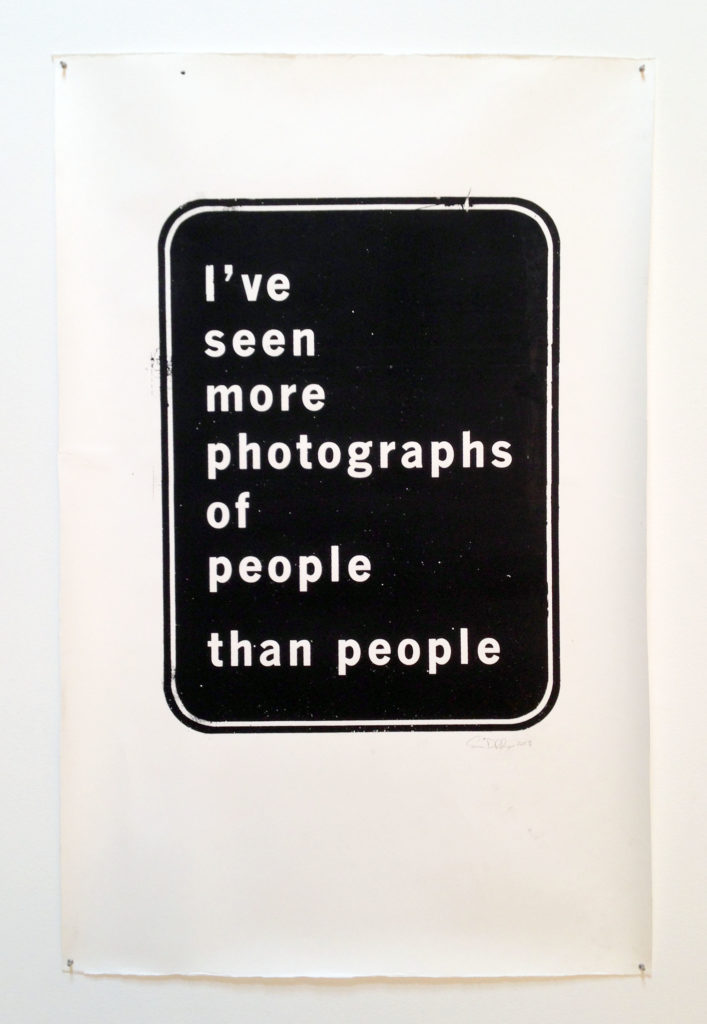 One of artist Sean Duffy’s Road Signs, part of a group exhibition in 2013 at Vielmetter Los Angeles.

Independent scholar and author Dr. Houman Sarshar will be speaking at The Broad as part of their series The Logic of Poetry and Dreams (free but reserve ticket)

Wand are playing at The Echo (also Friday)

The Tissues are having a free record release party at Zebulon with additional performances by Chernobyl, R Clown and Fucked Forever

Twin Oaks are playing at The Satellite as part of a free night of bands that includes Magic Bronson, Bandie and Wax Charmer

The Egyptian Theatre is showing a double feature of Airplane! and Stripes with a discussion between screenings with directors Jim Abrahams, David Zucker and Jerry Zucker.

Jimmy Whispers is playing at The Hi Hat with Dark Tea, Cyrus Gengras, and The Lentils

Photo Ops is playing a free show at Gold Diggers

Celebrate free admission at both MOCA locations with a day of performances, music, art-making activities, free ice cream, and more with a free shuttle between locations

Kicked Off The Streets are playing with Sustivity, Cardboard Boxer and Law at The Smell

Gold-Diggers is hosting a benefit for WIRES Wildlife Rescue Organization who are working to provide aid to the animals affected by the wildfires in Australia. Performers includes Ben Lee, William Tyler, Meatbodies and more. ($15.45)

The Rose Bowl Flea Market is back for its monthly event

D.A. Stern is playing a free show with Traps PS and Bart & The Bedazzled at Zebulon

Foie Gras, Glaare, Portrayal of Guilt, and Street Sects are playing The Smell

There’s a screening of Rolling Stone: The Life and Death of Brian Jones at The Regent Theater

Weyes Blood is performing at The Fonda Theatre with Dustin Wong

UCLA Film & Television Archive continues its screenings in the Billy Wilder Theater at the Hammer Museum with a night of programming that includes the 1961 film Nude on the Moon followed by Smut Without Smut: Bizarro Horror Night, a collection of “hardcore horror movies with the hardcore removed”. ($9)

The Underground Museum’s Purple Garden Cinema film this week is Wanda. Novelist Rachel Kushner will be there to give a special introduction to the film. (free)

It’s the 50th Anniversary of the Hollywood Bowl’s night of Tchaikovsky music with the Los Angeles Philharmonic, conductor Bramwll Tovey, and the USC Trojan Marching Band performing plus fireworks ending the evening

As part of Blum & Poe’s >BTWN x FILM + MUSIC< series, artist Jim Shaw and filmmaker/curator Jodi Wille will present shorts from the Counterculture Film Vaults followed by music by Shaw and friends within an installation of the artist’s creation (free)

For the closing of Barbara Stauffacher Solomon’s exhibition Relax into the Invisible at LAXART, L.A.-based artists Emily Mast and Barnett Cohen will present an afternoon of dance and theater inspired by Solomon’s work. Performances will take place from 3-5pm.

Artists Genevieve Gaignard and Samuel Levi Jones will be giving a walk through of their respective solo exhibitions at Vielmetter Los Angeles followed by a conversation with Leigh Raiford, associate professor of African American Studies at the University of California, Berkeley. (free)

Y La Bamba is performing at KCRW HQ in Santa Monica as part of their free Summer Nights party programming. There is also a free screening at 10pm of Good Boys (but you have to RSVP)

Blum & Poe are showing Richard Kovitch’s PENNY SLINGER: OUT OF THE SHADOWS, followed by a discussion with Penny Slinger

Independent Shakespeare Co. is having a free performance of the play Twelfth Night in Griffith Park tonight (Friday and Saturday they will be performing Pericles) 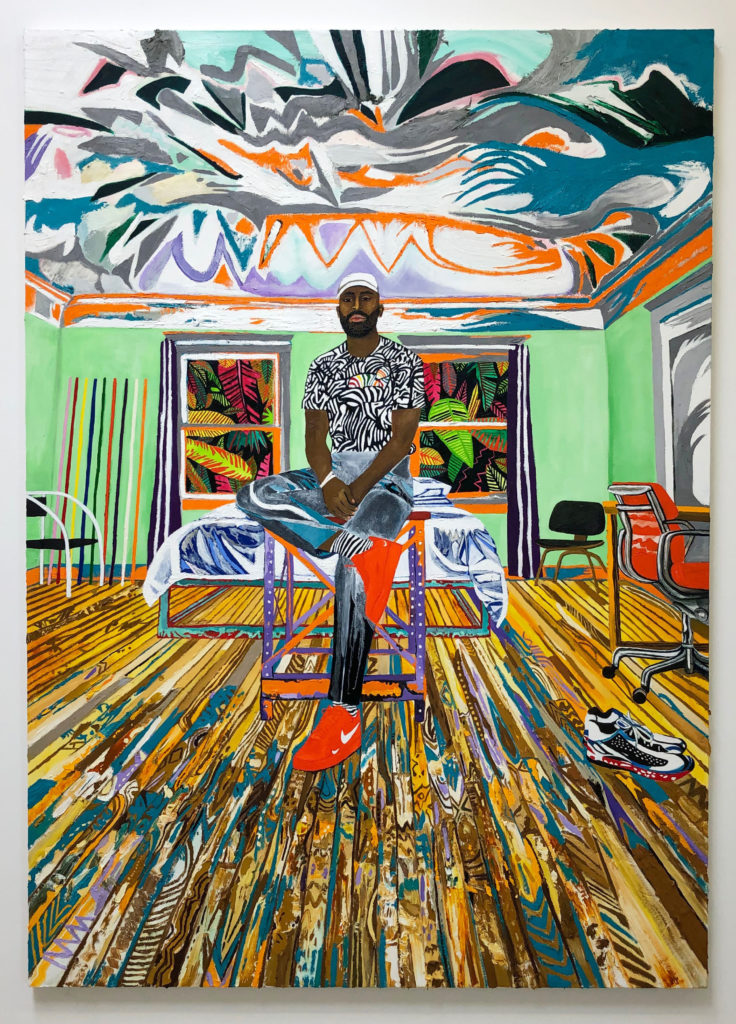 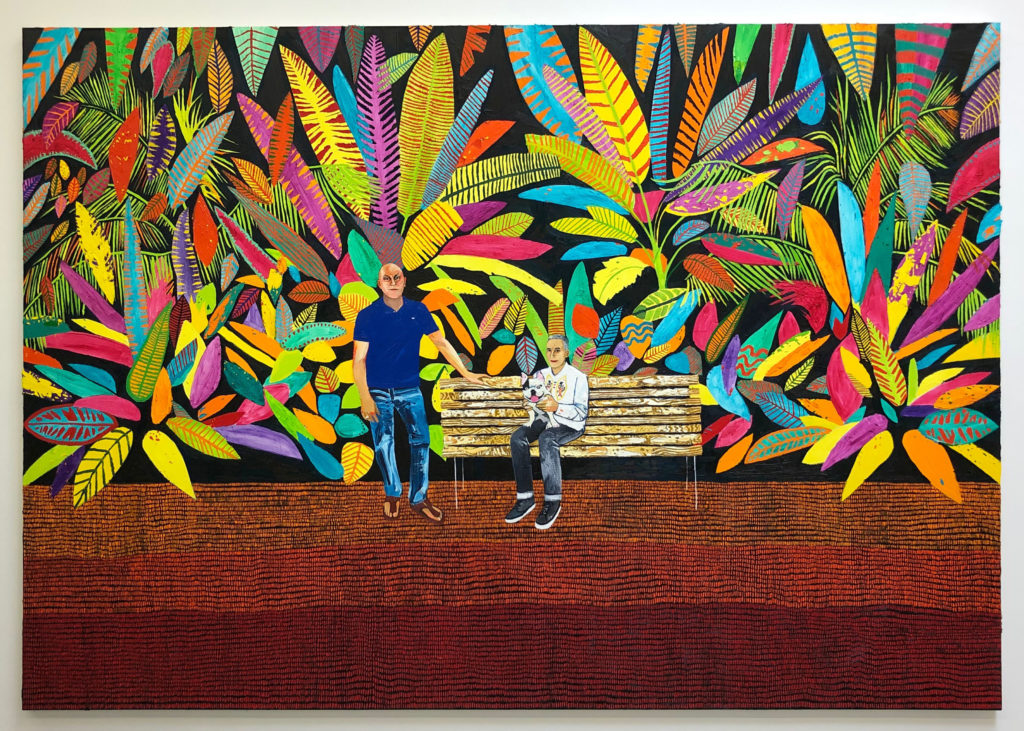 Currently at Vielmetter Los Angeles’ Culver City location is Raffi Kalenderian’s fourth solo exhibition, Memento Vivo.  His unique and colorful paintings draw you in immediately. The contrast between the bright, dynamic environments and the relaxed demeanor of the portrait’s subjects, creates an intriguing tension in the works.

Several of the paintings, like those seen above, include vibrant tropical plants. Sometimes they dominate the canvas, and at other times are seen through a window or in a reflection. According to the press release, these represent “a celebratory attitude of renewal and growth against seemingly impenetrable darkness”.