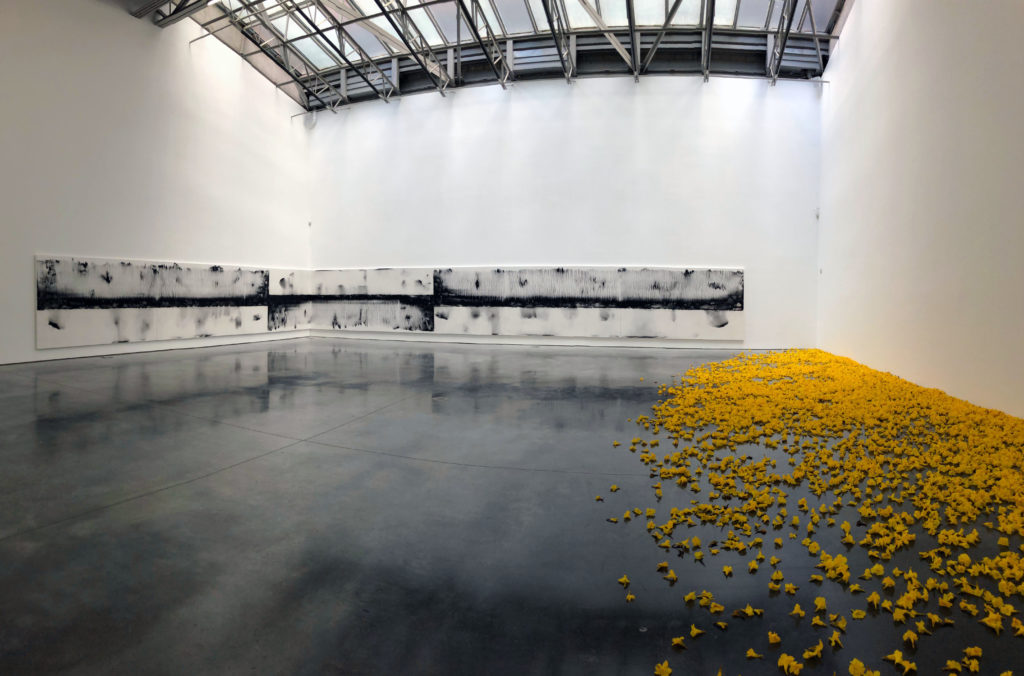 The exhibition revisits the Surrealist encounter with the anti-colonial movement in the Caribbean to consider present forms of coloniality and its relation to climate justice. The artists have taken inspiration from the radical and transformative collection of poems by Martinican poet and politician Aimé Césaire under the same name. The term “cadastre” refers to the means by which the territorial limits of private property are publicly registered. Taking cue from the powerful mechanics of Césaire’s writing, Allora & Calzadilla’s exhibition Cadastre brings together three works all informed by a poetics of mark making, traces, and survival.

In April 1941, the anti-colonial Martinican poets and theoreticians Susanne and Aimé Césaire, founders of the literary journal Tropiques, met with a group of artists and intellectuals fleeing Nazi-occupied France, whose boat had temporarily docked at the West Indian port of Fort-de-France. The refugees included Helena Benitez, André Breton, Wifredo Lam, Jacqueline Lamba, Claude Lévi-Strauss, André Masson, and Victor Serge, among others. Penumbra takes as its point of departure the now mythic hikes the group took in the gouffre d’Absalom valley in Martinique, which served in part as inspiration for Lam’s masterpiece, The Jungle. Penumbra is a soundscape of “shadow tones,” a psycho-acoustic phenomenon perceived when two real tones create the semblance of a third. The original musical composition by David Lang uses nonlinear distortion of violin sounds to evoke the sensation of walking through that tropical forest.

In Graft, thousands of cast blossoms of the Tabebuia chrysantha tree, a common native species in the Caribbean, appear as though a wind had swept them across the gallery floor. Graft alludes to environmental changes set in motion through the interlocking effects of colonial exploitation and global climatic transformation. Systemic deforestation and depletion of the Caribbean’s original flora and fauna is one of the primary legacies of colonialism. Nevertheless, the Caribbean remains a biodiversity hotspot and, along with thirty-five other hotspots worldwide (which amount to just 2.4% of the earth’s land surface), supports nearly 60% of the world’s plant, bird, mammal, reptile, and amphibian species. As rising global temperatures result in more frequent and violently destructive weather, adding even more pressure to the Caribbean, the uncanny presence of tropical tree blossoms in Graft stands as a potent harbinger for the immeasurable losses that continue unabated after centuries of colonial plunder.

Measuring 6 feet in height and 70 feet in length, and covering the east and south walls, the exhibition’s eponymous work, Cadastre takes electromagnetism as its subject and medium. To make the work, Allora & Calzadilla dropped iron filings on top of a canvas and placed it above an array of copper cables connected to an electrical breaker in the artists’ studio in San Juan, which gets its power from the Puerto Rico Electric Power Authority. When the breaker is turned on, the electrical current causes the iron particles to self-organize into a composition of lines and shapes governed by the electromagnetic field. As the Latin title and full subtitle (Meter Number 18257262, Consumption Charge 36.9kWh x $0.02564, Rider FCA-Fuel Charge Adjusted 36.9 kWh x $0.053323, Rider PPCA-Purchase Power Charge Adjusted 36.9kWh x $0.016752, Rider CILTA-Municipalities Adjusted 36.9kWh x $0.002376, Rider SUBA Subsidies $1.084) suggest, the work probes the propriety politics of electricity and the power grid. Cadastre is part of a continuum of multiple sites and actors that the artists are probing through their artistic process working with electricity, from the oil futures market, to the transnational holders of PREPA bond debt, to the local consumers who are forced to pay for the recently privatized power company’s fiscal mismanagement.

Recently, their film, The Great Silence, was shown at Marciano Art Foundation in Los Angeles. It is subtitled with thoughts from the perspective of an endangered Puerto Rican parrot who lives in the same area as the Arecibo Observatory, which was created to capture and transmit radio waves from and into outer space. The parrot questions why humans look to communicate and make a connection with extraterrestrial life, when there are parrots who can potentially use human language nearby.

It’s a thought provoking and moving piece, well worth a watch.