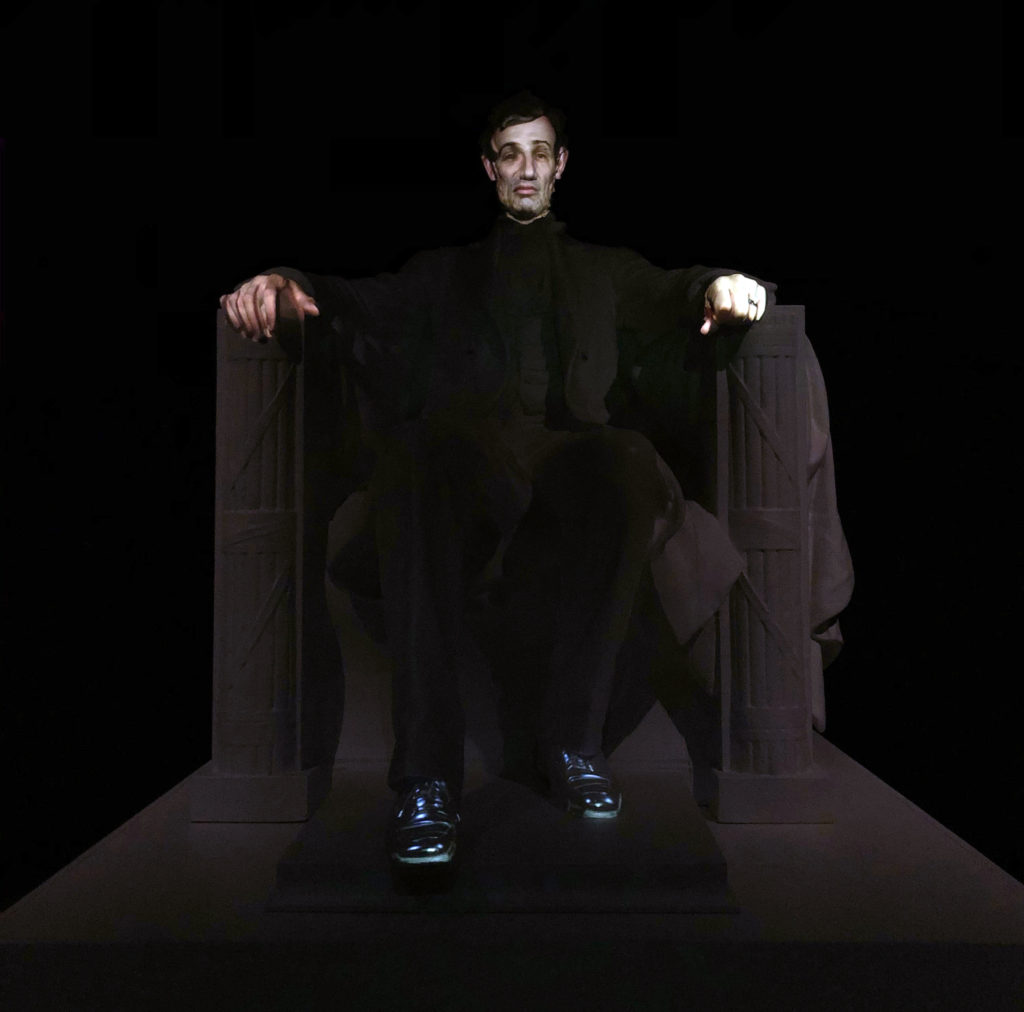 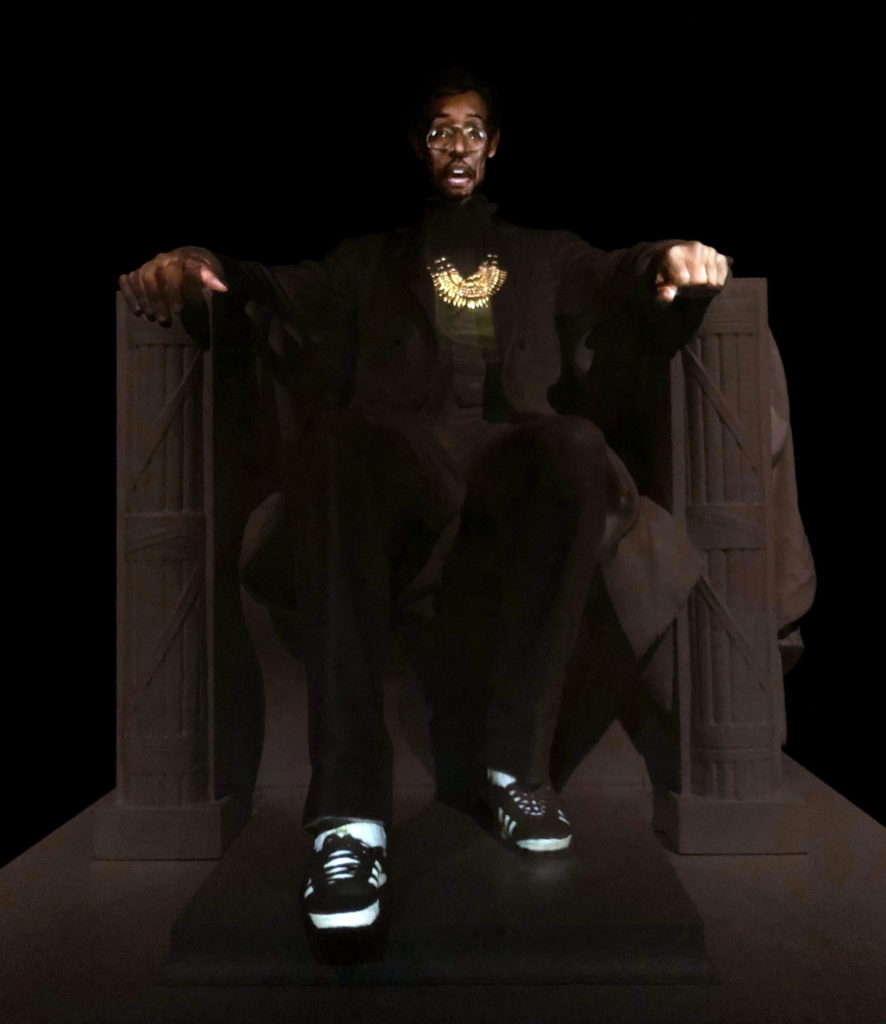 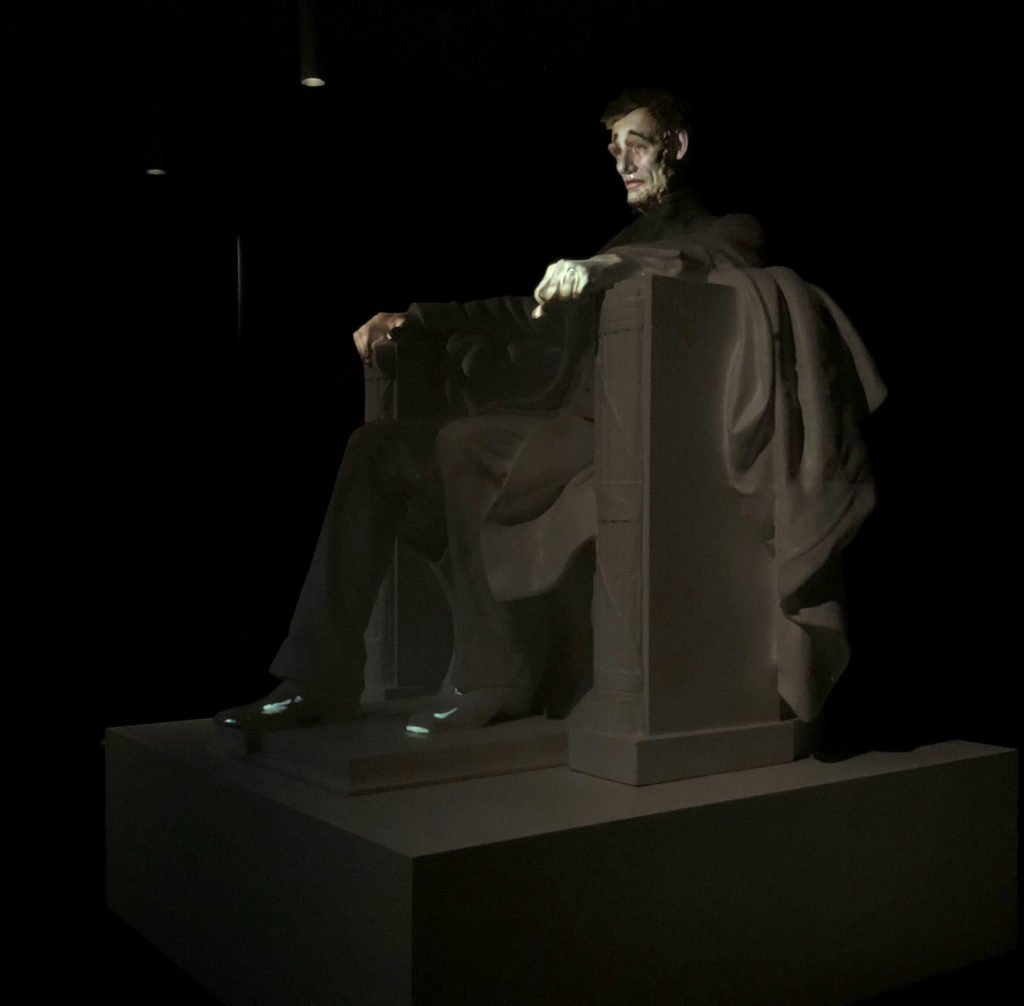 Currently at Galerie Lelong & Co. is Krzysztof Wodiczko: A House Divided…, a projection installation work that explores the diverse political issues in the United States. For this project Wodiczko projects videos of various people from New York’s Staten Island discussing their political views. Their bodies appear superimposed on two large statues of Abraham Lincoln, which face each other in the room.

The exhibition’s title refers to the phrase “A house divided against itself cannot stand” from Abraham Lincoln’s 1858 speech during an unsuccessful run for U.S. Senate, which quoted a passage from the Bible, Matthew (12:22-28). Lincoln borrowed a familiar phrase in order to garner support for the contentious proposition of unifying a rapidly expanding nation teetering on the brink of war. Wodiczko repurposes the statement in a contemporary setting to highlight the partisan contention. In 2019, Wodiczko conducted research of suburban social landscapes in the Tri-State area before choosing Staten Island, a New York City borough that is racially and ethnically diverse yet a simultaneously politically divided geography: north as liberal-leaning and south as conservative-leaning. “Speaking to each other, they explain and exchange their positions and disagreements while expressing their mutual wish for careful and respectful listening to the opposite side,” says Wodiczko.

This exhibition closes 3/7/20 but the artist’s most recent site-specific projection, Monument, is showing in Madison Square Park (starting at dusk) through May 10th.

For Monument, Wodiczko projects “the likenesses and spoken narratives of resettled refugees—who have originated from different parts of the world—onto the Park’s 1881 monument to Admiral David Glasgow Farragut. A looping video projection will bring the monument to life with stories of displacement that illuminate how war, conflict, and political fallout impact individuals globally, encouraging visitors to consider how the history of conflict is memorialized.”