Office Relief: Benefit for Australia is happening at The Roxy Theatre with stars from The Office performing including Jenna Fischer, Creed Bratton, Rainn Wilson and more

Radical Face is playing at the Troubadour with Axel Flóvent

MOCA Grand Avenue has a free screening of Community of Parting by Jane Jin Kaisen. The film derives from Kaisen’s extensive research on Korean shamanism and her engagement with communities affected by war and division using imagery from North and South Korea, Jeju Island, the DMZ, Kazakhstan, Japan, the US, and Germany. The screening will be followed by a discussion with the artist and Crystal Mun-hye Baik, author of Reencounters: On the Korean War & Diasporic Memory Critique.

Bombón, Gustaf, and Gesserit are performing at Recess Ops in San Pedro

The Egyptian Theatre is hosting two free conversations for Oscar Season- first with this year’s nominated film editors at 10:30am and later with nominated production designers and set decorators at 3pm (both are free but RSVP and remember with the preparations for the Oscar ceremony right down the block, it’s probably best not to drive there)

Tender are performing with XYLØ at the El Rey Theatre

Aimee deBeer is playing at Moroccan Lounge with Taylor Belle

Sinéad O’Connor is performing at the El Rey Theatre

FIDLAR are playing a free show at Amoeba Hollywood before their sold out shows this weekend. They will also be signing copies of their album Almost Free

Dean Wareham and Cheval Sombre are performing together at Zebulon

Blum & Poe are hosting a book launch party for Friedrich Kunath’s I Don’t Worry Anymore with a special performance by Destroyer in conjunction with his excellent exhibition at the gallery which closes this weekend.

Hosted by Open Mike Eagle and Baron Vaughn, The New Negroes at The Virgil is a night of comedy and music occurring every 4th Sunday of the month

Pasadena Comic Con is happening at the Pasadena Convention Center

Potty Mouth are playing with Whitmer Thomas and more for Luke Schwartz and Friends: A Night of Storytelling and Live Music at the  Bootleg Theater

The LA Launch Party for Oral History Project’s Women of Rock is tonight at Zebulon with live performances and discussion panels with artists that include Phranc, Neon Music, Alice Bag, Patty Schemel and more

Artist Carolina Caycedo will be speaking as part of a participatory book launch/event at LACMA that begins in the exhibition A Universal History of Infamy, and includes performances by Marina Magalhães, Isis Avalos, and Samad Raheem Guerra (free)

Sadly, gallery and event space Machine Project is closing its doors- for their final event they are having a print sale from 2-6pm, followed by a closing party with beer and surprise performances

American Culture are playing with Plague Survivor at Zebulon

The California African American Museum is hosting an all day symposium to mark the closing of the exhibition We Wanted a Revolution: Black Radical Women, 1965-85- with opening remarks by Alison Saar honoring her mother Betye Saar and Samella Lewis, Faith Ringgold in conversation with her daughter Michele Wallace, a workshop, a performance, a closing reception and more (free but register)

White Magic are opening for Linda Perhacs at Zebulon

No Win are opening for Teenage Faces at The Hi Hat

The Pacific Standard Time Festival: Live Art LA/LA  has numerous performances happening throughout the weekend at  REDCAT (many of them free)

dineL.A. is back for its winter edition and runs until 1/26

Surf Curse- All is Lost

The theme of the main exhibition for tonight’s Downtown LA Artwalk is “We the People” and check out Indoek’s 27 Frames Art Show, Silent Auction and after party at Think Tank Gallery (free)

Pearl Charles of The Blank Tapes is headlining a night of bands at The Echo that includes Big Search, GospelbeacH, and Golden Daze

MOCA Curatorial Assistant Rebecca Matalon is leading a walk through of Mickalene Thomas: Do I Look Like a Lady? on MOCA Grand Ave’s free night and/or check out the last week of Doug Aitken’s exhibition Electric Earth at The Geffen Contemporary at MOCA (also free tonight)

Photo LA begins at The Reef (and runs through Sunday, with discounted tickets on Goldstar)

iam8bit gallery and Everything is Terrible! are hosting a free opening party for The Jerry Maguire Video Store, a recreation of a video store except with every video being Jerry Maguire. Check here for additional ticketed performances during the show’s run from tonight until 1/29

DineLA begins and runs through 1/27

Potty Mouth are headlining a free show at The Hi Hat with Lindsay B, Fast Friends, and Justus Proffitt

Trajal Harrell will be performing a customized version of his dance piece Judson Church Is Ringing in Harlem (Made-to-Measure) / Twenty Looks or Paris Is Burning at the Judson Church in the Hammer Museum courtyard (free, also on Sunday)

Head to LACMA to experience Ana Prvacki’s Tent, quintet, bows and elbows, “a sculpture, a sound piece, and a performance”. It will be activated at 4:15 with a conversation and book signing to follow. (free)

Story of the Running Wolf- Stratospheric

Winter are playing at The Echo with Dante Elephante, Summer Twins, The Dream Ride and DJ Honey Power opening

The Soft Moon are playing at The Regent Theater

Holly Herndon is playing at the Teragram Ballroom

Depart Foundation is having a book release and signing for Marc Horowitz’s book Phillips Auction Catalog, at a McDonalds on Wilshire to stick with the juxtaposition of images of fast food and classic art pieces found in the book

Cinefamily Theater is having a David Bowie film marathon which includes- The Hunger (at midnight Friday), Labyrinth, The Man Who Fell to Earth, Merry Christmas, Mr. Lawrence and a tribute film to his work as an actor- Cracked Actor: Bowie on Film

Museum Free-For-All-Day has free admission to many LA museums including MOCA, the Craft and Folk Art Museum, LACMA and more

Night on Broadway returns this year and features free entertainment and arts programming in 7 of Broadway’s historic theaters, an
on-street festival area featuring booths and pop-up shops from local businesses, and a main stage with bands that include Ozomatli and Aloe Blacc

In conjunction with her solo exhibitions at MOCA Pacific Design Center, and at the Hammer Museum, photographer Catherine Opie joins MOCA Chief Curator Helen Molesworth and Hammer Chief Curator Connie Butler for a conversation about the concepts of portraiture, gender, celebrity, and creativity at play in the artist’s photographs at the Hammer (free)

John Grant is having a free concert at the Hammer Museum and it’s the last weekend of the Jim Hodges show as well- http://hammer.ucla.edu/programs-events/2015/01/john-grant-in-concert/

Tennis System are performing at Amoeba Hollywood for free- http://www.amoeba.com/live-shows/upcoming/detail-3182/index.html

Part pot luck, part slide show Slideluck LA will present the work of over 20+ photographers set to music while you eat and drink (5$ open bar-beer and wine)- https://www.facebook.com/events/1438809453008224/?ref=3&ref_newsfeed_story_type=regular

Artist Chelsea Knight drove around the country having local actors read monologues and break character- tonight at ltd los angeles,  actors from LA will try to do the same, drinks will be served as well- http://www.ltdlosangeles.com/upcoming_exhibition.html

LACMA’s film double bill today is East of Eden and The Godfather– see both for $5- http://www.lacma.org/event/east-eden

Also at LACMA, as part of The Director’s Series, Michael Govan (LACMA CEO) will be speaking with Tacita Dean following a screening of Manhattan Mouse Museum, Dean’s film about the artist Claus Oldenburg in his studio- http://www.lacma.org/event/director%E2%80%99s-series

The English Beat are at The Roxy- http://www.theroxy.com/event/728793-english-beat-west-hollywood/

Photographer Mark Ruwedel will speak with author Tyler Green and sign his book at LACMA- http://www.lacma.org/event/ruwedel-and-green

Dead Kennedys are at the Roxy- http://www.theroxy.com/event/719459-dead-kennedys-west-hollywood/

There are two big art fairs this weekend- Photo LA and the LA Art Show, both downtown.

Miwa Matreyek’s incredible dance/animation projection performances have been mentioned on this site before– and this weekend along with the performance group Cloud Eye Control (Anna Oxygen, and Chi-wang Yang) she will be performing Half Life at the Redcat which was inspired by blog entries by women who experienced the 2011 Fukushima Daiichi nuclear crisis-  http://www.redcat.org/event/cloud-eye-control-half-life 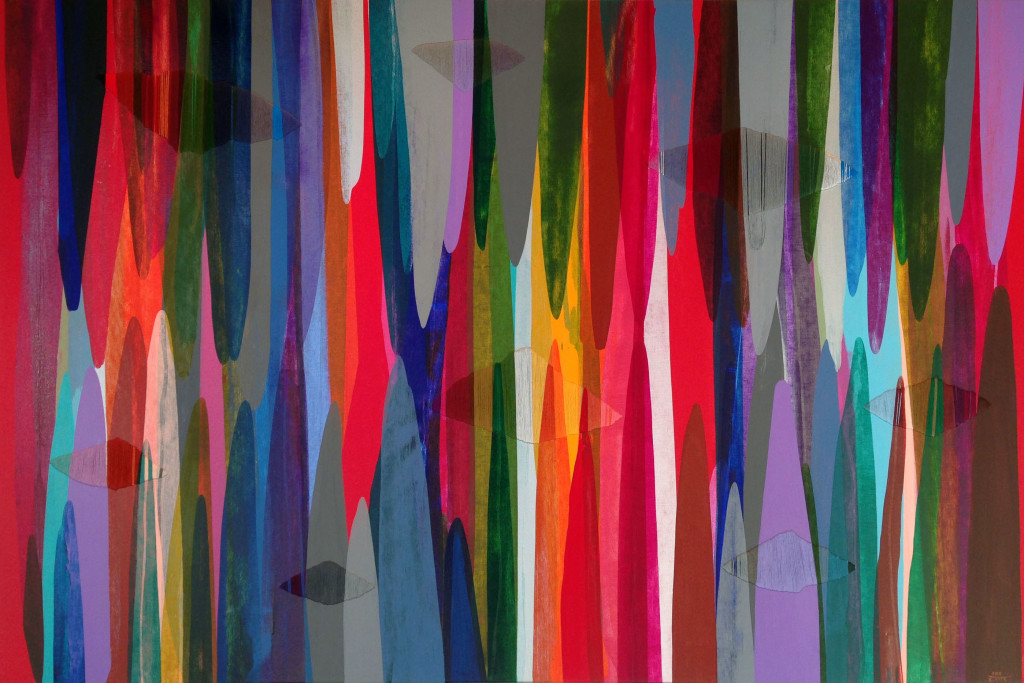 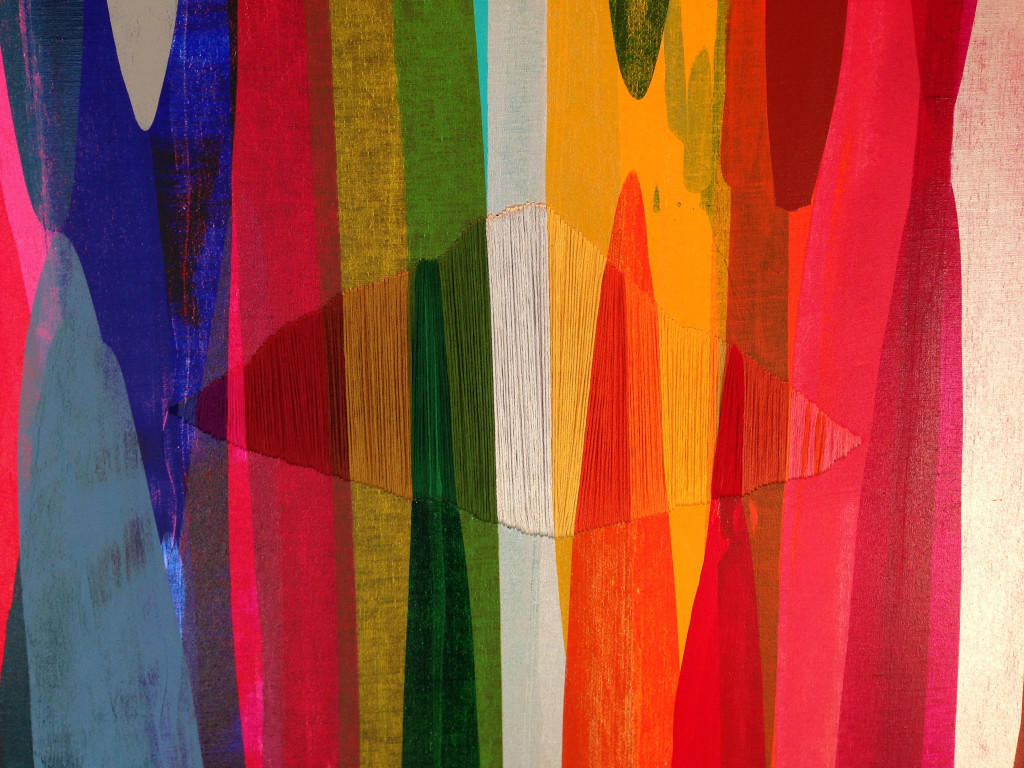 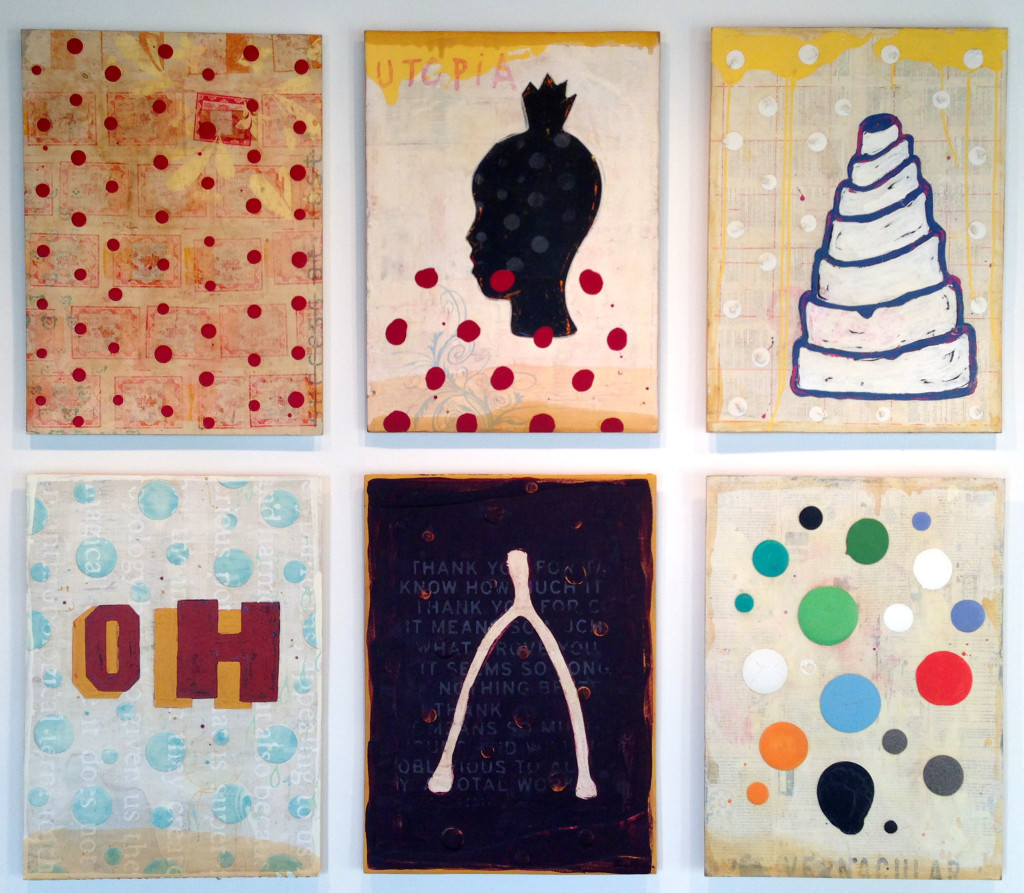 Currently at Fresh Paint Gallery until 1/18, the works by both of these artists are vibrant and colorful with interesting details.

If you miss this show, Fresh Paint will also be at the LA Art Show, booth 936.

Things to do this weekend in Los Angeles-

**Photo L.A. is at the LA Mart this year and there is a shuttle between the two shows making it easy to do both. Added bonus-  Save 10$ on the LA Art Show if you show a valid TAP (Metro) card.**