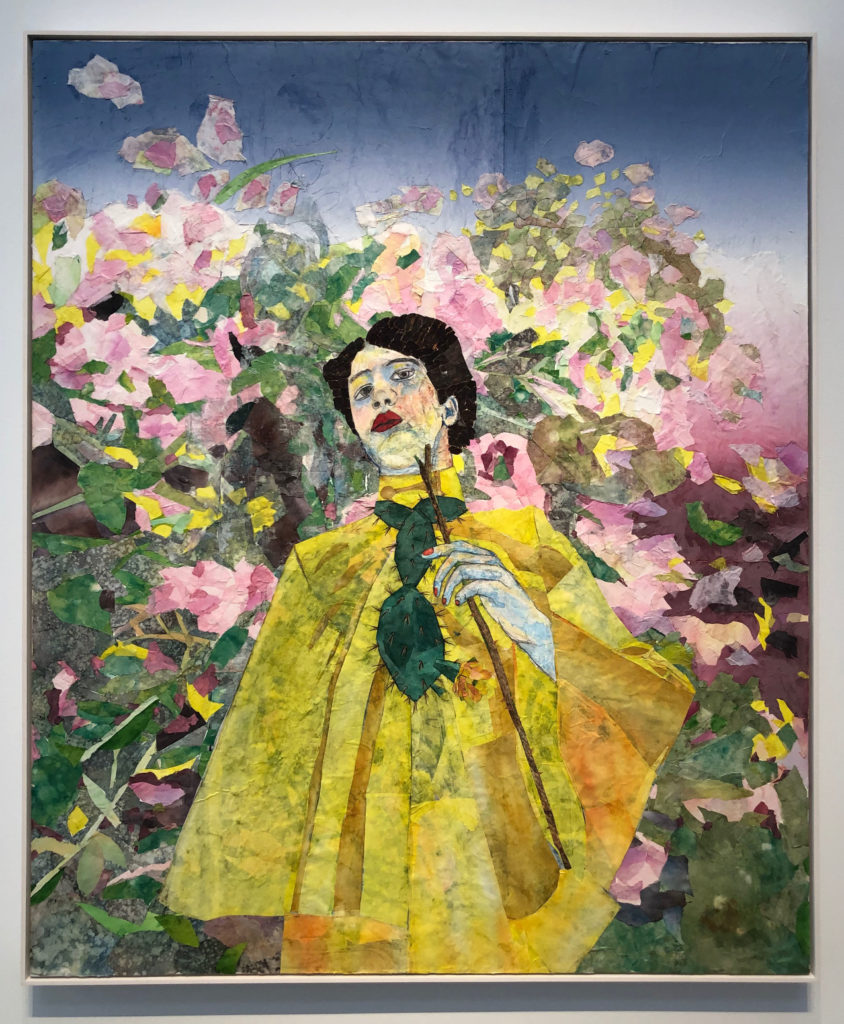 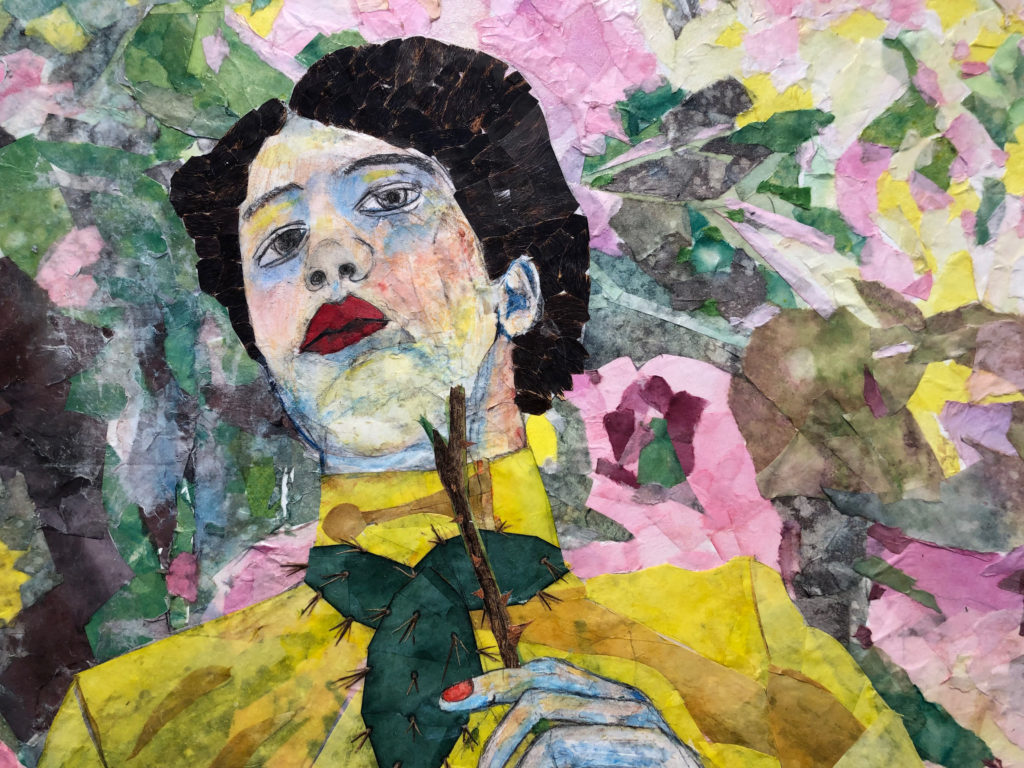 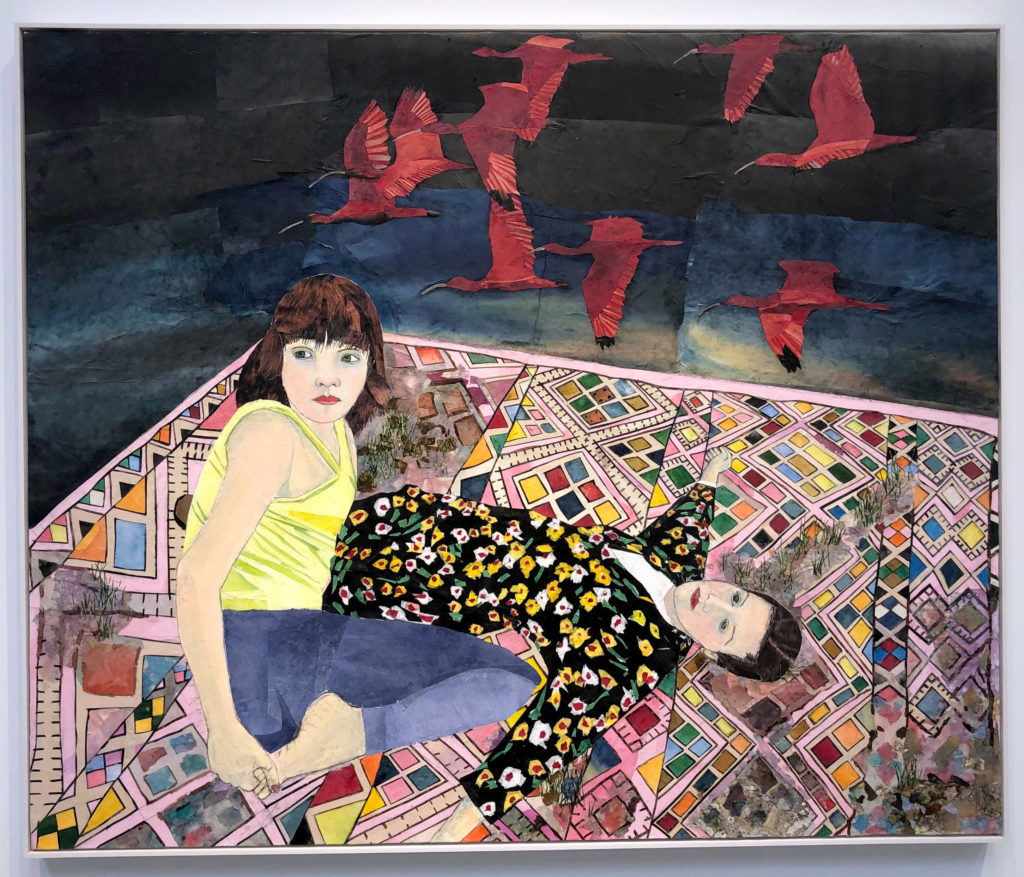 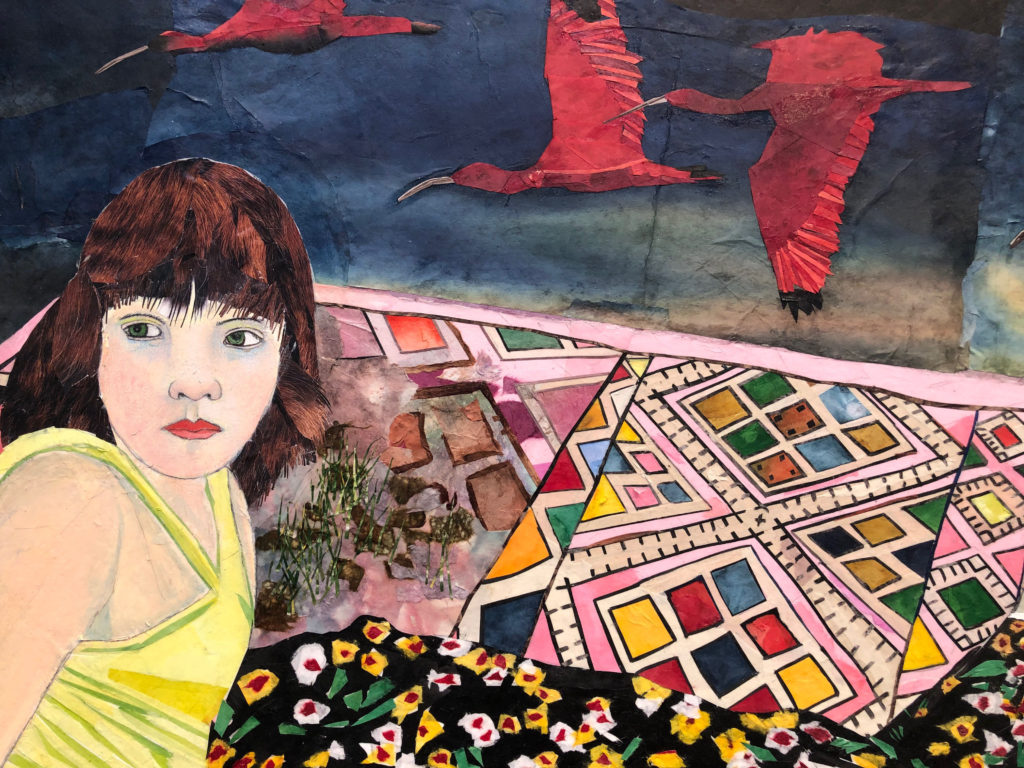 Inspired by her youth in the countryside of Bogotá, Colombia, Berrío’s paintings explore the experience of immigrant identity, intercultural connectivity and the beauty that is found in the diversity of cultures and countries. Berrío depicts her figures with richly detailed and patterned backgrounds of exteriors and interiors. The large, detailed mixed media canvases employ lush, carefully crafted, multilayered Japanese papers and paint, resulting in scenes replete with pensive yet confident figures amid a scene of visual exuberance.

Berrío’s work often places female figures at the center of her intricately woven landscapes. Painted with watercolor details, her figures stare out of the composition determined to confront the viewer from their own surreal surroundings. Her work is evocative of predecessors such as Gustav Klimt and Egon Schiele, both known for their exceptional degree of emotional directness and figural distortion in the place of conventional beauty. Berrío’s works float seamlessly between historical and contemporary artistic styles as they employ a wide visual vernacular ranging from expressionism to graphic, abstract marks.

The variety of media and techniques found in María Berrío’s practice emphasizes the interwoven cultural breadth of the world in which we live, where globalization and injustice touch the lives of everyone. Each character Berrío paints is a symbol of this new reality and the strength that can issue from it. For the artist, a female soldier on the front lines is as brave and mighty as the mother who protects her children from the perils of war. These depictions of women are seen as guiding spirits who are strong, vulnerable, compassionate, courageous and in harmony with Nature and themselves. With these combinations of human traits and emotions, Berrío fortifies her belief that with womanhood every action is considered beautiful and strong, no matter how small or large.

For her current show, A Cloud’s Roots, Berrío focuses especially on place and migration. The individuals are seen in preparation for their travels, in moments of transition, and in various states of uncertainty. Berrío states, “the ambiguity is intentional; although I may have a specific idea in mind when making the work, the actual piece lacks cultural specificity to allow for all symbolic possibilities.” Berrío therefore gravitates towards symbols with global cultural significance, such as braids, birds, and flowers, with the hope that they allow diverse audiences to bring their own understanding to the work.

In her recent work, A Cloud’s Roots (2018), Berrío creates a fictional species of tree based on the dragon’s blood tree, found exclusively on an island off the coast of Yemen. The dragon’s blood tree has adapted perfectly to the island’s desert-like climate and rocky soil, inhospitable to most other plant life. It is a powerful symbol of survival and resilience, able to thrive even in the most unlikely conditions. The figures in the piece are compelled to leave their home but they carry with them the knowledge that they too have the power to put down roots wherever they go.

By reflecting on the beauty of our immigrant nation, Berrío’s new body of work aims to rewrite the narrative of American history to include the stories of people who have long been excluded. It makes space for those who were not born in this country, but come here full of hope and desire to make it their home. As the art canon expands its scope and redefines its boundaries, Berrío imagines a future in which people with diverse perspectives can walk into an institution and see themselves reflected back. Berrío states, “so many immigrants, myself included, are stuck in the inbetween, not quite from here, and no longer from there. I create work that bears witness to this liminal state of being and acknowledges it as an essential part of being American. I wish to convey that which can never be conveyed: the sheer joy of being, of creation, and the undiscoverable mystery of being alive.”

Also, if you are in New York City, she recently created several glass and ceramic mosaics that can be seen in the Fort Hamilton Pkwy Station.