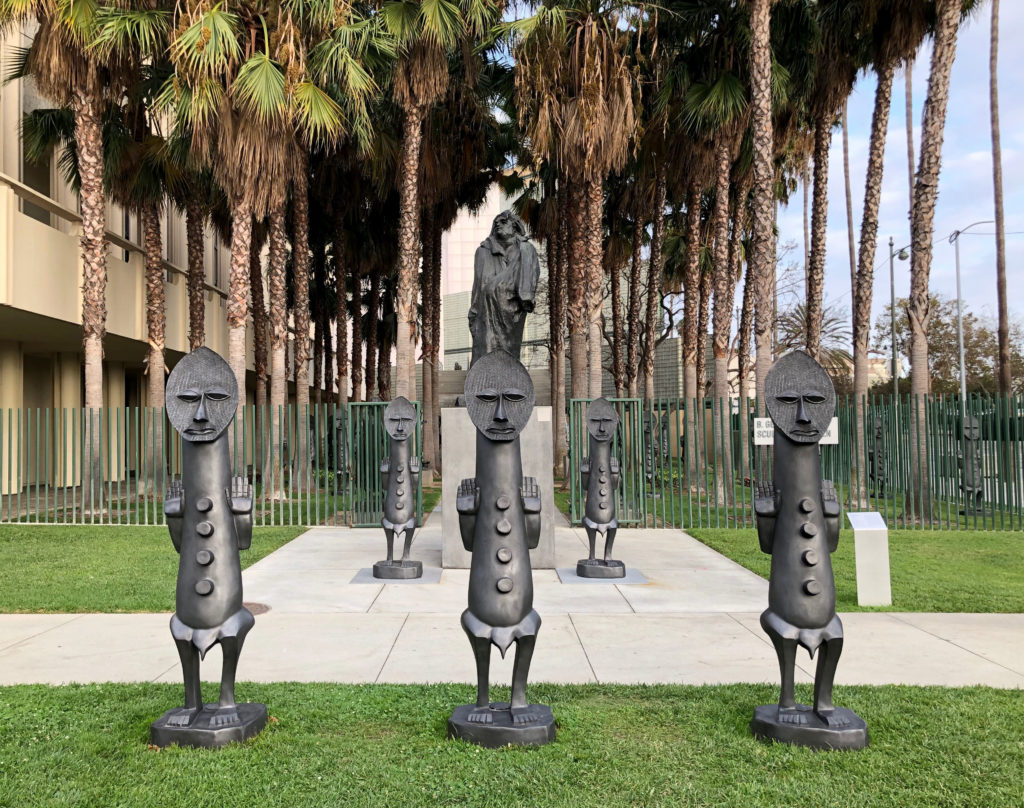 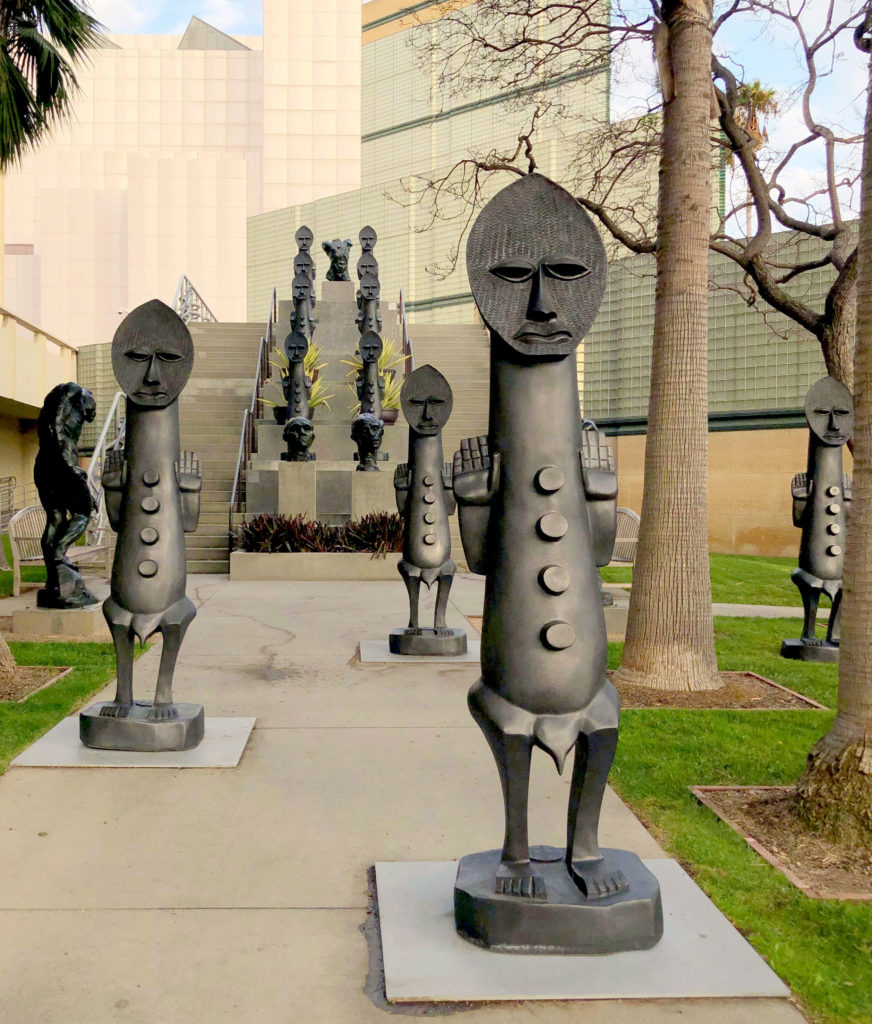 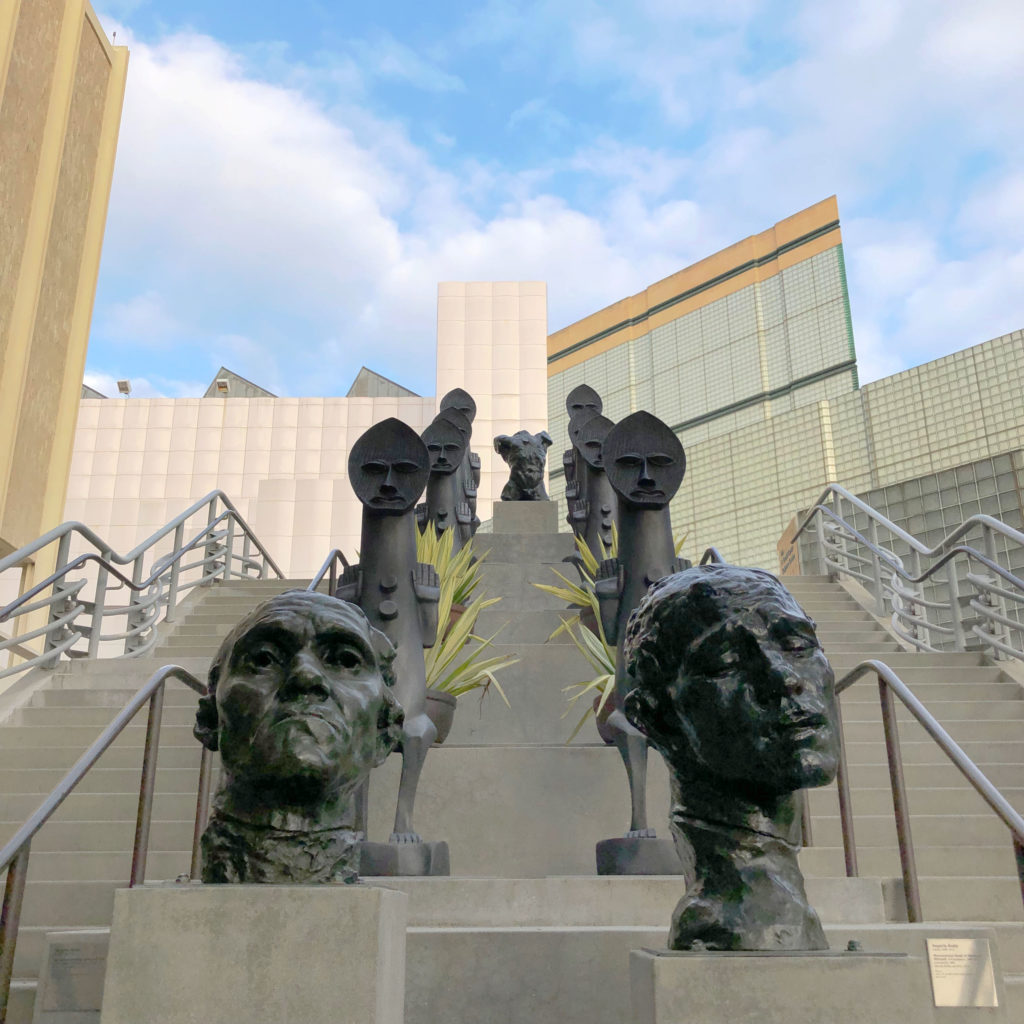 Located in LACMA’s B. Gerald Cantor Sculpture Garden among the sculptures by Rodin is Zak Ové’s sculptural installation, The Invisible Man and the Masque of Blackness.

The title’s references—Ben Jonson’s 1605 play, The Masque of Blackness, and Ralph Ellison’s 1952 novel, Invisible Man—mark two milestones in black history: the first stage production to utilize blackface makeup, and the first novel by an African American to win the National Book Award. In addition to literary references, the artist draws inspiration from Caribbean Carnival, a festival that originated from the Mardi Gras celebrations of the region’s French colonists, and Canboulay, a parallel celebration in which enslaved people expressed themselves through music and costume and paid homage to their African traditions. The installation’s 40 graphite figures stand tall and dignified to represent the strength and resilience of the African diaspora.

In the the video below, Ové  provides some interesting insight and information on the work.

This exhibition closes 11/3/19. LACMA is free for residents with ID from 3pm and is open late on Fridays until 8pm.

Megan Thee Stallion, Rico Nasty, Blueface, Comethazine, Tierra Whack, DaBaby and more will be performing for the XXL Freshman 2019 Concert at The Novo

Hammer Museum’s free Summer Concert Series continues this week with a performance by The Tracks as well as KCRW DJs, food trucks and a cash bar

The Underground Museum’s Purple Garden Cinema is hosting FWD: Short Films. The free program, curated by MEMORY, will feature a range of work from emerging and established filmmakers.

Metro Art has a new program featuring LA based DJ collectives- Movements at Union Station. The first night in the series will feature The Soul Children, an LA based crew of artist, promoters and DJs. The event will also include a drop-in silkscreen stencil workshop led by Self Help Graphics & Art, a photo booth and food trucks.

The Music Center’s Dance DTLA, a night of free dance lessons and music ,continues this week with a disco theme

The Box is screening Leigh Ledare’s The Task at 2pm with a conversation with the artist and Catherine Taft, director and curator at LAXART, to follow from 4:30-6:30pm

Morgan Delt is playing at the Lodge Room with Pearl Charles, Vinyl Williams, The Sunsettes, and Mad Alchemy Light Show

The Drums are playing at the Hollywood Palladium with CHAI

Smokescreens, Holy Tunics, and Susan are playing at The Monty Bar

To celebrate the opening weekend of The Invisible Man and the Masque of Blackness, Zak Ové’s sculptural installation, LACMA is hosting an afternoon of art, music, which will include a discussion with Ové. A performance by Trinidad Steel Drum Band begins at 4 pm, followed by a conversation with Ové at 5 pm. (free)

Independent Shakespeare Co. is having a free performance of the play Pericles in Griffith Park tonight (also Saturday)

Shutups, Weird Night, Launcher, Slaughterhouse, and Shitgiver are all performing at The Rec Center

Cam’ron is playing a $5 show at The Novo

OUTFEST Los Angeles LGBTQ Film Festival continues in various locations with screenings that include shorts and television episodes. This weekend some of the screenings will be at the outdoor Ford Theatre including- the Kathy Griffin documentary, with Griffin in conversation with Louis Virtel pre-screening on Thursday, and the documentary Gay Chorus Deep South on Friday which includes a performance by the San Francisco Gay Men’s Chorus.