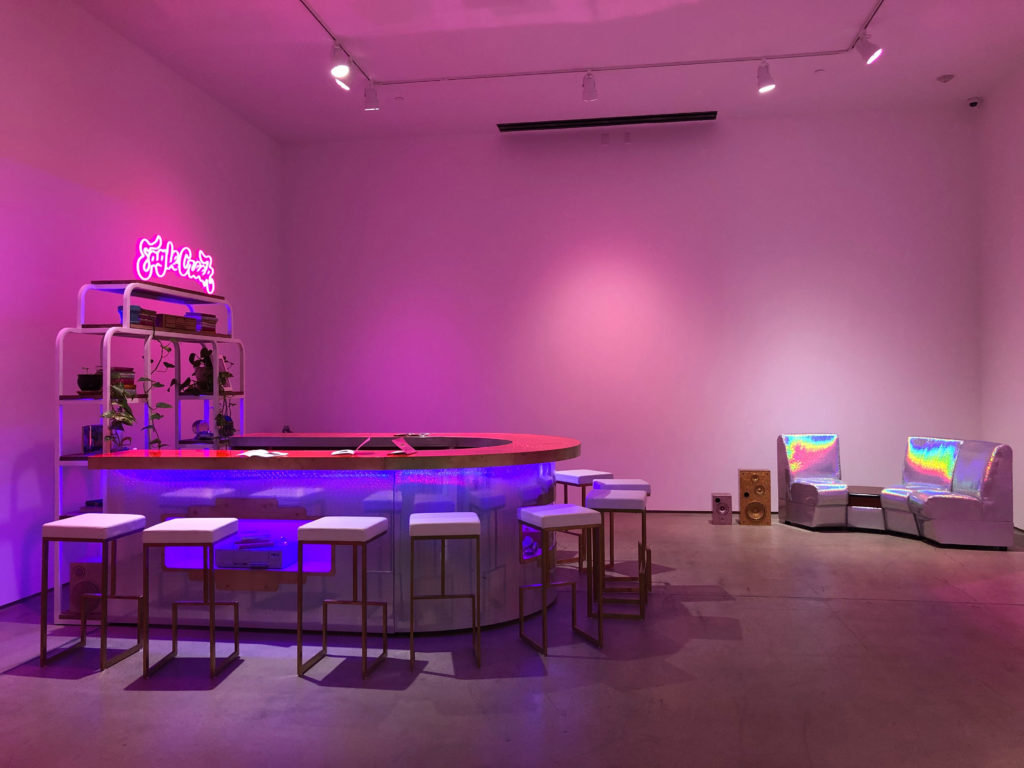 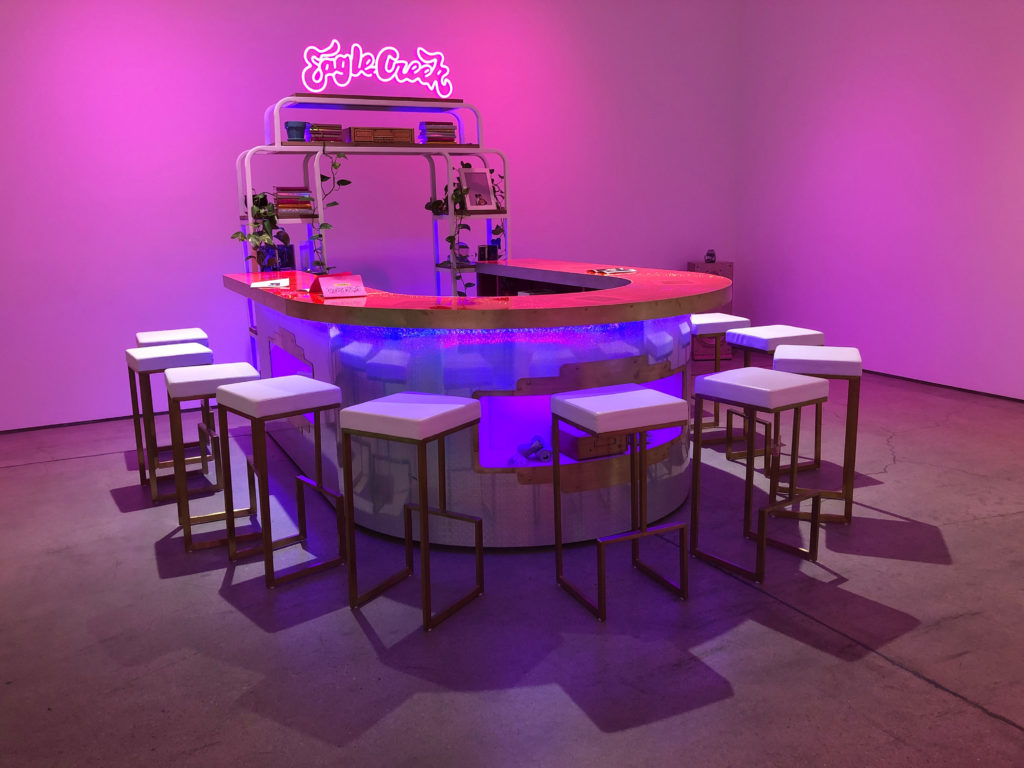 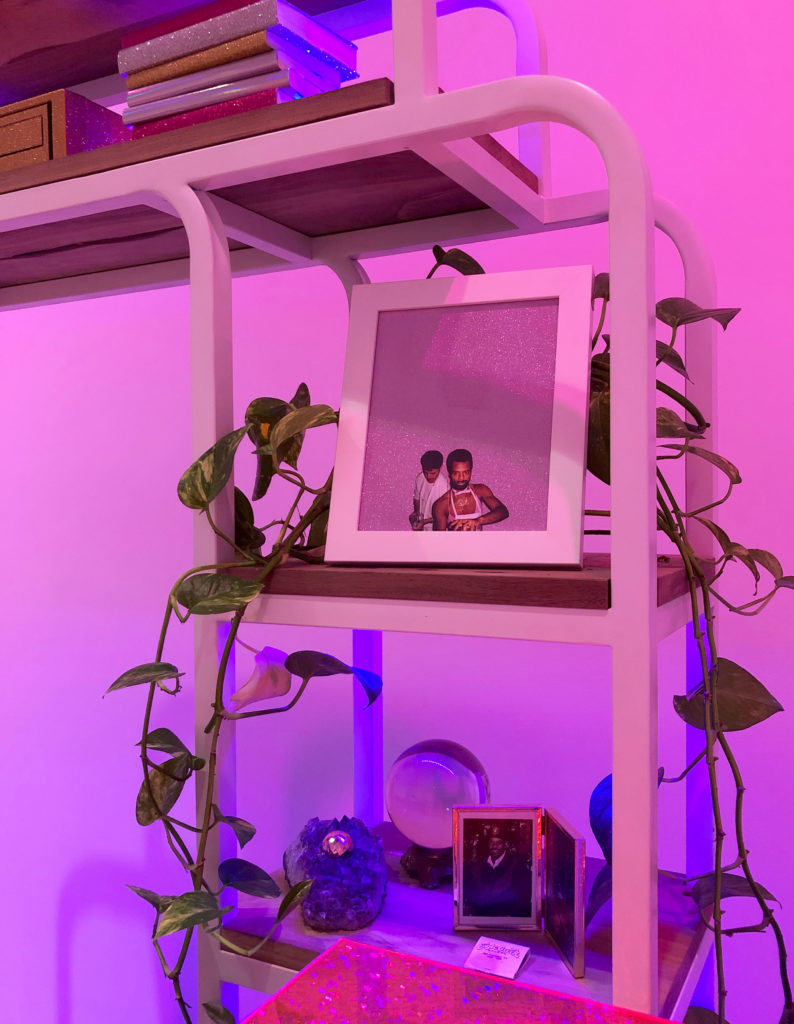 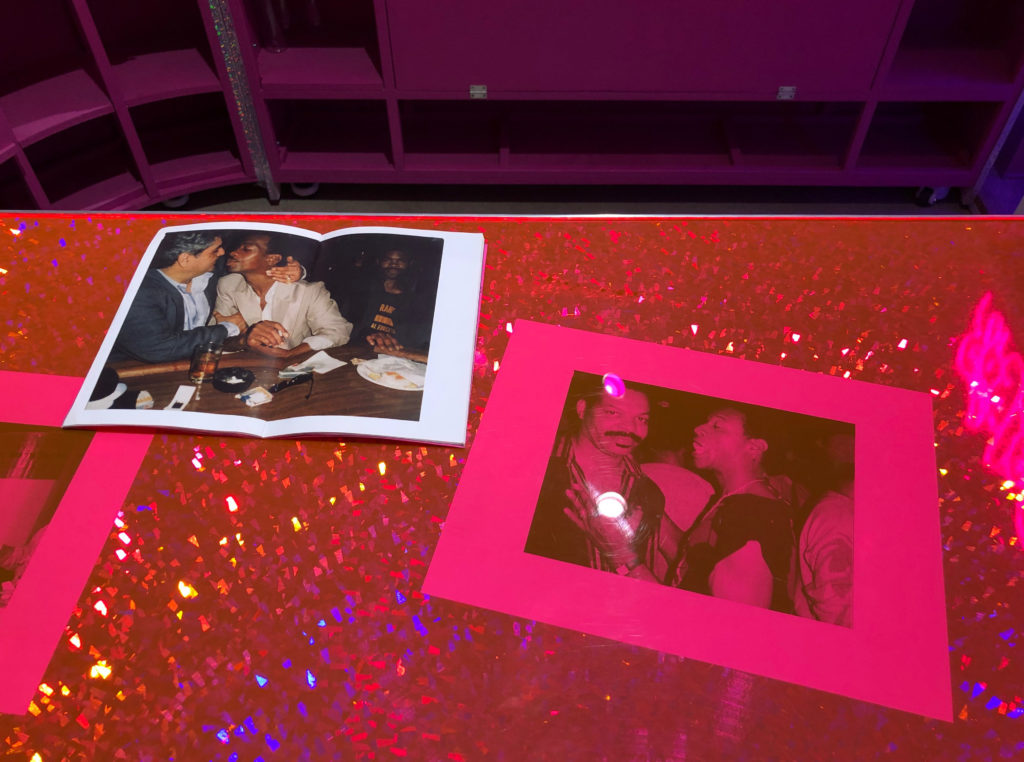 For her first solo museum presentation in Los Angeles, Oakland-based artist Sadie Barnette (b. 1984) will reimagine the Eagle Creek Saloon, the first black-owned gay bar in San Francisco, established by the artist’s father Rodney Barnette, founder of the Compton, CA chapter of the Black Panther Party. From 1990–93 Barnette’s father operated the bar and offered a safe space for the multiracial LGBTQ community who were marginalized at other social spaces throughout the city at that time.

Barnette engages the aesthetics of Minimalism and Conceptualism through an idiosyncratic use of text, decoration, photographs, and found objects that approach the speculative and otherworldly. Barnette’s recent drawings, sculptures, and installations have incorporated the 500-page FBI surveillance file kept on her father and references to West Coast funk and hip-hop culture to consider the historical and present-day dynamics of race, gender, and politics in the United States. Using materials such as spray paint, crystals, and glitter, she transforms the bureaucratic remnants from a dark chapter in American history into vibrant celebrations of personal, familial, and cultural histories and visual acts of resistance. The New Eagle Creek Saloon is a glittering bar installation that exists somewhere between a monument and an altar, at once archiving the past and providing space for potential actions.

The museum is also showing No Wrong Holes: Thirty Years of Nayland Blake (pictured below).

For over 30 years, artist, educator, and curator Nayland Blake (b. 1960) has been a critical figure in American art, working between sculpture, drawing, performance, and video. No Wrong Holes marks the most comprehensive survey of Blake’s work to date and their first solo institutional presentation in Los Angeles.

Heavily inspired by feminist and queer liberation movements, and subcultures ranging from punk to kink, Blake’s multidisciplinary practice considers the complexities of representation, particularly racial and gender identity; play and eroticism; and the subjective experience of desire, loss, and power. The artist’s sustained meditation on “passing” and duality as a queer, biracial (African American and white) person is grounded in post-minimalist and conceptual approaches made personal through an idiosyncratic array of materials (such as leather, medical equipment, and food) and the tropes of fairy tales and fantasy. Particular focus will be paid to work produced while Blake lived on the West Coast, first in the greater Los Angeles area as a graduate student at CalArts, followed by a decade in San Francisco—years bookended by the advancement of the HIV/AIDS epidemic in the 1980s and the “culture wars” of the 1990s. 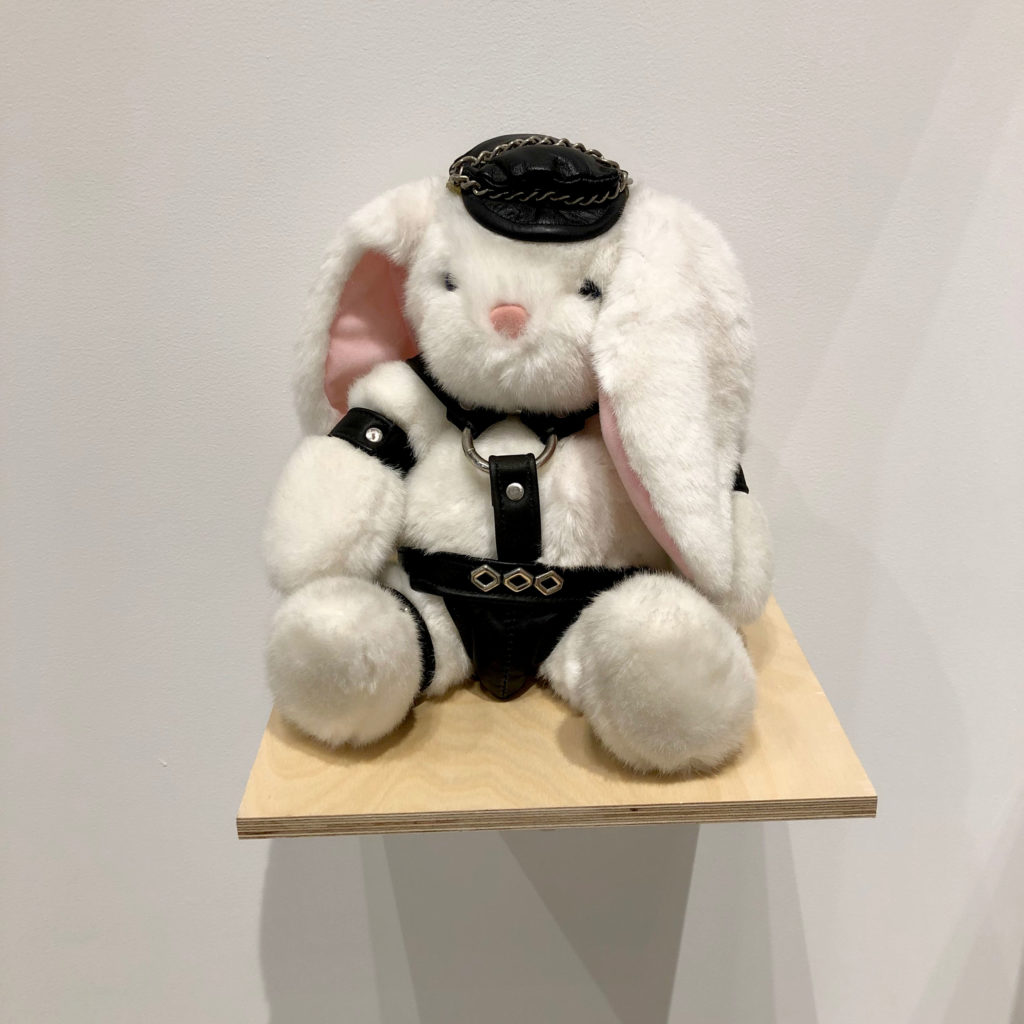 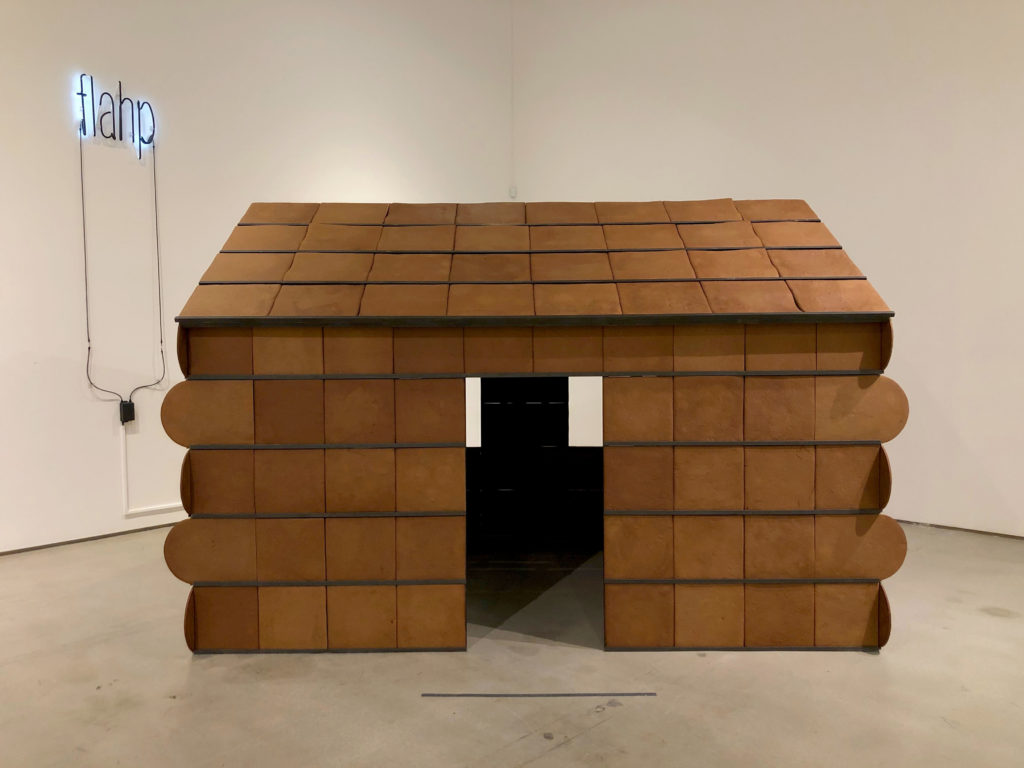 The gingerbread house, pictured above, is one of Blake’s best known works and was created using actual gingerbread. It references the fairy tale Hansel and Gretel as it recreates the house used to lure the children to their potential doom.

From the wall description-

Fairy tale and fantasy are themes to which the artist often returns as a mirror onto society and culture. Further, duality and the act of revealing are critical to Blake’s practice: as a biracial, white-passing, queer, gender non-binary person, Blake’s identity is one that is not obvious and is predicated on existing in two spaces at once. Though initially captivating through its inviting sight and scent, over time, the once-pleasant sensorial experience of Feeder 2, with its cold, empty interior, becomes overwhelming, even nauseating, as it challenges the truth of perception and association.

Fog Lake are playing El Cid with Foxes in Fiction

Blackbird Blackbird is performing at The Roxy with vōx

The Shivas are playing with Movie Club at the Bootleg Theater

The Annual SoCal Museum Free For All offers free admission to museums that include The Autry, Descanso Gardens, LACMA, Natural History Museum and more

Playwright Samuel Beckett’s rarely performed Quad I and Quad II, directed by Michael Hackett, will be performed at Hammer Museum as part of a county-wide festival of performances inspired by LA Opera’s world premiere of Eurydice

glass beach, Dogleg, and Kara’s Walk Home are playing at The Echo

The Knocks and Friends are playing at 1720

The High Curbs are playing at Moroccan Lounge with Sad Park, Death Lens, and Super Lunch

Devon Welsh of Majical Cloudz has a new solo project and is performing at Bootleg Theater with Sorry Girls.  Get there early for a screening of Moses Sumney’s new music video Virile with a behind the scenes Q & A at 6:30pm (free with RSVP).

There are still free tickets available to see LA based educator, writer, theater actor, and documentarian Carolina Rivera Escamilla read her work in conjunction with Shirin Neshat: I Will Greet the Sun Again, for The Broad’s series The Logic of Poetry and Dreams

Union Station is having it’s annual holiday tree lighting (with snow) and the first of this year’s cocoa concert series, starting at 6:30pm

Curator Jamillah James will be leading a tour of No Wrong Holes: Thirty Years of Nayland Blake followed by a happy hour with light refreshments at ICA LA for their monthly Art Buzz event  (free but register)

Moon Duo are playing at Lodge Room with Umberto opening

The Great LA Walk is your annual chance to walk across Los Angeles county with a group of other energetic walkers. This year’s route runs from Arcadia, through Pasadena and onward to City Hall.

Death Valley Girls and Crocodiles are playing at Lodge Room

Creature Feature Festival II is happening at the Bootleg Theater with performers that include The Blank Tapes, Early Evil, Young Creatures and more

Bootleg Theater is screening a double feature of Louis Malle’s God’s Country, about the farming community in Glencoe, Minnesota in 1979, which was thriving at the time. Forced to abandon the project early, Malle returns in 1985 to follow up, and finds that things have taken a dark turn during the Reagan era. The second film is Lee Grant’s The Willmar 8 a film about “a group of eight women who, in 1981, carried out the longest bank strike in American history to protest gender discrimination at great cost to their reputations, marriages and livelihoods in the 14,000-person town of Willmar, Minnesota- 60 miles north of Glencoe”.

Deadbeat Beat- You Lift Me Up

Bombay Bicycle Club are playing at The Mayan with Blaenavon

Ghostly is celebrating its 2oth Anniversary with performances by Gold Panda, Geotic, Mary Lattimore, Shigeto, and DJ SV4 at The Regent Theater

Pop Up Magazine’s “live magazine show” returns to The Theatre at the Ace Hotel, this time with the theme The Escape Issue in collaboration with The California Sunday Magazine. Performers include comedians Jordan Carlos and Chris Duffy, poet Sarah Kay, photographers Lucas Foglia and Lisette Poole, and more

Nightmares on Wax and Luke Vibert are DJ’ing at 1720

Pacer, Simulcast, and Devon Williams are opening for Stolen Jars at The Satellite

Lambda Lit Fest Los Angeles celebrates LGBTQ writers and includes tons of free programming throughout the city including performances and workshops. A day long celebration on Saturday at Pico Union Project concludes the programming with a presentation by Tegan and Sara from their new memoir, performances by artists including Phranc, Dynasty Handbag and Tommy Pico, and a karaoke party.

Deadbeat Beat are playing at All Star Lanes with Gum Country, Shells, and Dummy

Van Nuys Arts Festival is taking place at the civic center with live music, interactive art, a 3D maze, and more- all free

De Lux are opening for Friendly Fires at The Fonda Theatre

Blum & Poe are screening the LA premiere of Olompali: A Hippie Odyssey outdoors behind the gallery with a performance by folk band The Storytellers (free but RSVP required)

Deanna and Ed Templeton are signing their books at Arcana Books

Hammer Museum is having a free opening night party for the new Lari Pittman exhibition, which will include live DJs, drinks, and food trucks, as well as late night access to the gallery

The Berries, Justus Proffit, Alms, and Dummy are playing at The Hi Hat

Michael Kiwanuka is opening for Gary Clark Jr. at the Hollywood Bowl

Pond are playing at The Fonda Theatre with Maraschino opening