Destroyer is performing at Lodge Room

As part of the Artists on Artists series at MOCA Grand Avenue, Miljohn Ruperto will be discussing the exhibition Open House: Elliott Hundley currently on view (free admission to the museum on Thursdays)

Al Green is playing at The Greek Theatre with Jessy Wilson

Worn-Tin is playing with Chaos Chaos at The Hi Hat

Sugar Candy Mountain, Flaural, and Hooveriii are performing at The Echo

The Courtneys, Ian Sweet, and Automatic are playing at Zebulon

ONE Gallery is hosting Rear Opening: A Performance Tribute to the Gutter Art of Stephen Varble, an afternoon program with performances by mutimedia artist Jason Jenn, aka the Troubadour Trixter, songs by Yozmit, the internationally celebrated visual artist, avant-garde party-artist, and singer/songwriter, and a musical tribute by Enrique Jesus Hernandez, the latinx, performance rock artist and domestic abuse activist. This program is presented in conjunction with the exhibition The Gutter Art of Stephen Varble: Genderqueer Performance Art in the 1970s, Photographs by Greg Day currently on view in the gallery.

Bad Suns are playing at The Wiltern with Carlie Hanson opening

Illuminati Hotties are opening for American Football at The Regent

Xeno & Oaklander, SRSQ, Chasms, and Fawns of Love are performing for Part Time Punks 14 Year Anniversary Show at the Echoplex 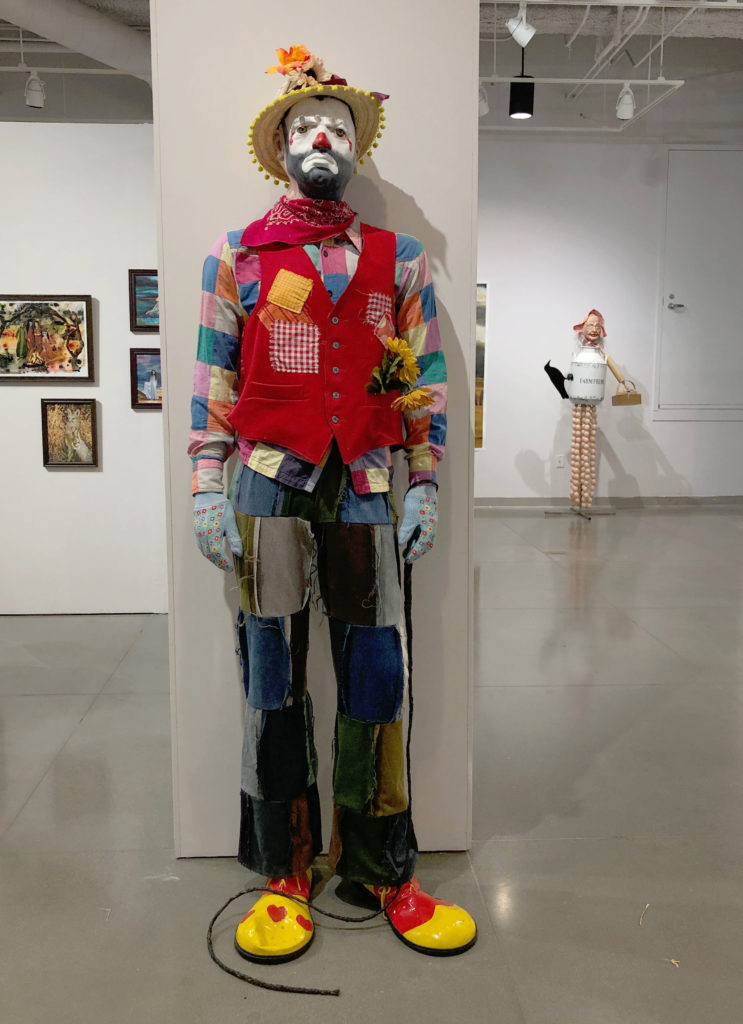 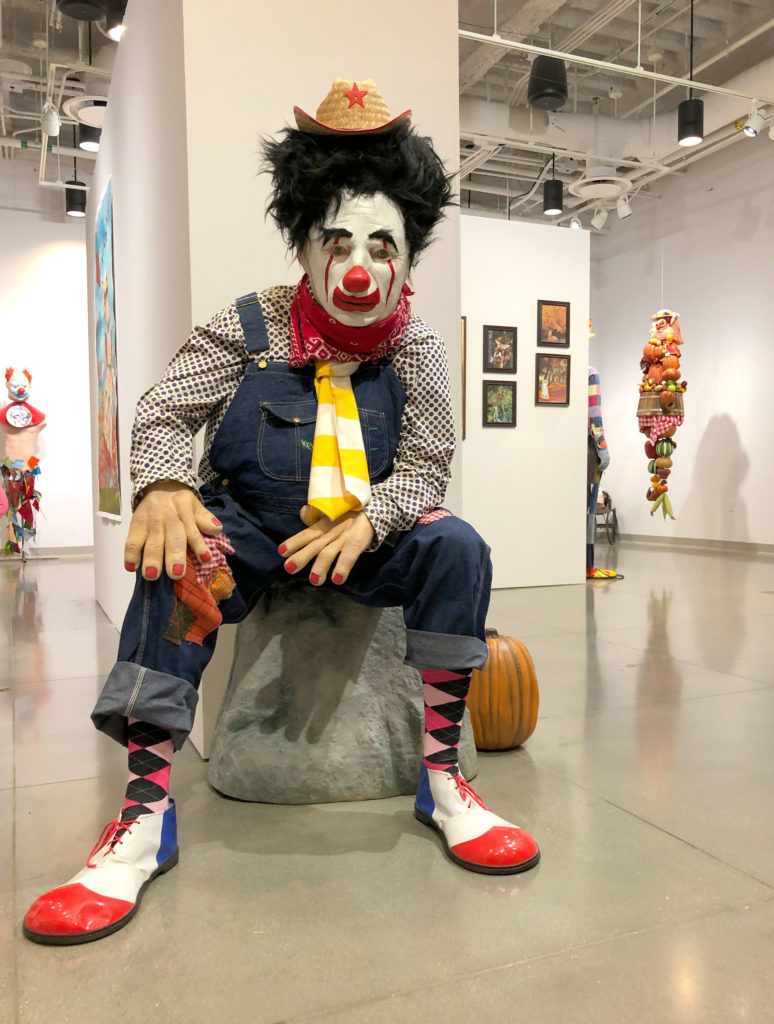 Pasadena currently has a lot of great art shows going on.

Depending on your susceptibility to coulrophobia, Marnie Weber’s exhibition (pictured above) at Pasadena City College is a fun and slightly unsettling collection of sculptures and images depicting a variety of odd characters.

sp[a]ce at Ayzenberg’s exhibition (shown below), The Universe is in Us, curated by Mark Todd, includes a selection of artists working in different media including painting, sculpture, collage and video.

For The Universe is in Us, Todd has assembled a diverse array of artists who honor the vastness of the universe around us through the raw material of our physical biology, our spirit, our emotion, and just everyday life on planet earth in contemporary society.

“What are we made of?” Todd asks in his curator statement. “Hydrogen, oxygen, carbon, nitrogen. The universe is inside of us all. Incredible as it is, we are literally made of stars. But what of our thoughts, dreams, hopes, worries? This too is inside. The eight artists in this exhibition expose these complexities that make us who we are and reveal them to us through a hodgepodge of collage, pencil, inks, oils and acrylics. Portraits of strangers stare back at us. Familiar but dreamlike landscapes swirl. Other worlds and oversized figures are on display. Playful and poetic, the work in this show is honest and sincere. At times, powerfully obsessive, at other times quiet and austere. The connection that ties them is what is inside each and every one of us.” 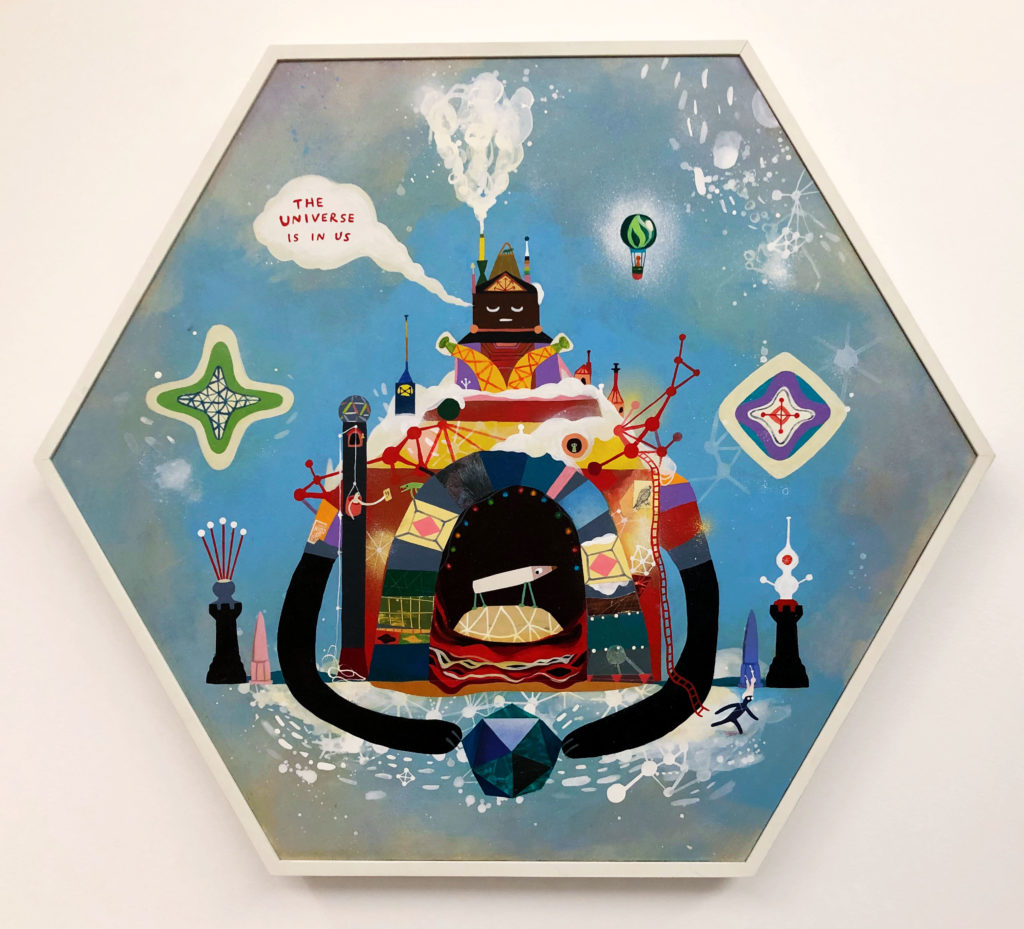 Souther Salazar, “The Universe is in Us” 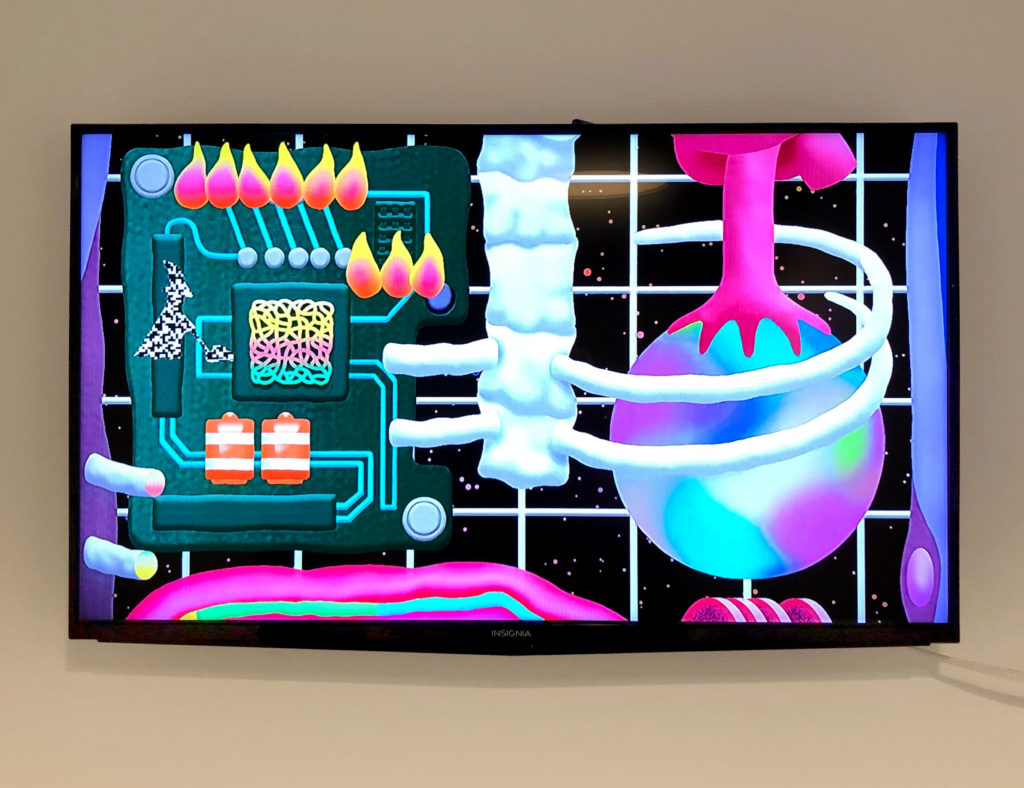 One of Saiman Chow’s video installations 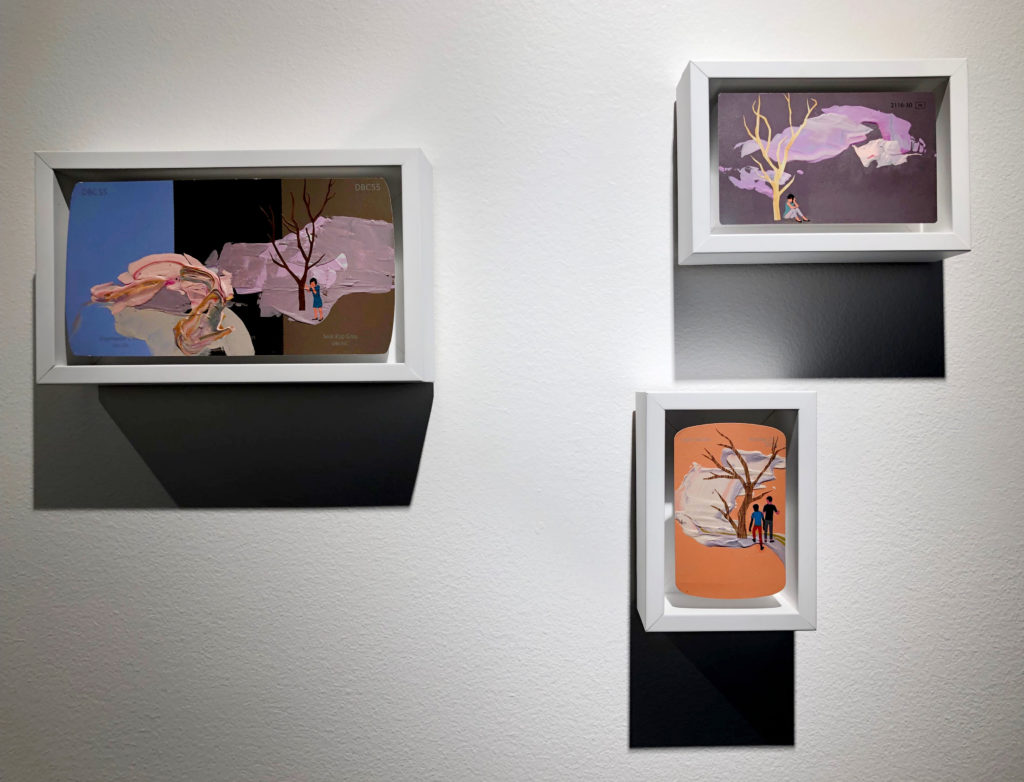 At the Armory Center for the Arts, there are two exhibitions (shown below)- Sara Kathryn Arledge: Serene for the Moment and Sandra de la Loza’s Mi Casa Es Su Casa.

From the press release for Serene for the Moment–

In this exhibition, abstraction is an entry point to consider daily encounters marked by abundance, loss, transcendence, and a dream-like passage of time. An under-recognized painter and innovator of mid-20th century experimental cinema, Sara Kathryn Arledge (1911-1998) was a prolific artist who emphasized the eerie in the mundane and the disorienting in the beautiful. Arledge worked at the margins of art history, shaping her practice with idiosyncratic personal myth. She is considered a pioneer of ciné-dance (dance made uniquely by and for the medium of film) and was one of the first to film dance movement to “extend the nature of painting to include time.” The exhibition includes over 60 of Arledge’s vivid works on paper, seven short films, and a selection of hand-painted glass transparencies. The work quietly suggests that subjective, “alternative” normals are equally legitimate.

From the press release for Mi Casa Es Su Casa–

In Mi Casa Es Su Casa, Sandra de la Loza interrogates historic photographs of her own Mexican American family to address issues of power, memory, and history through the concept of home. By obscuring, blurring, and replacing the bodies and faces in the photographs, she points to the codes that comprise the family photo—the landscape, architecture, pose, and fashion to investigate the uneasy and slippery terrain of representation itself. With this immersive installation, which simultaneously searches for shifting, non-reductive portrayals as it deconstructs hegemonic myths, de la Loza highlights a central paradox of our contemporary moment, where an increased social desire for fluid notions of identity coincides with a heightened demand to dismantle historic and current economic, political, and cultural violences. 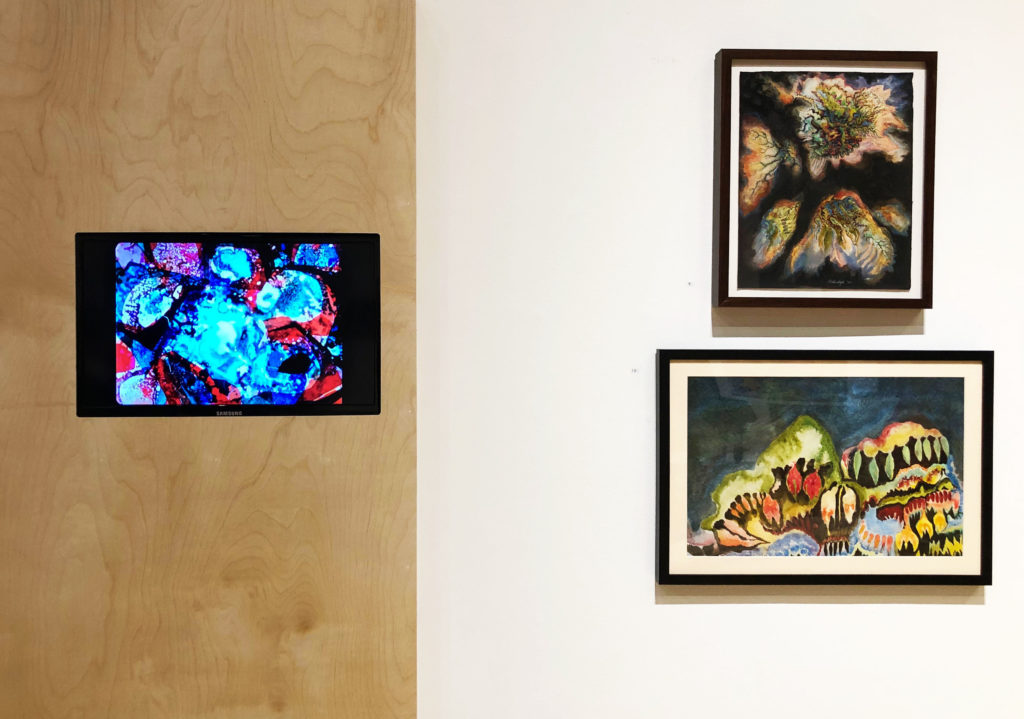 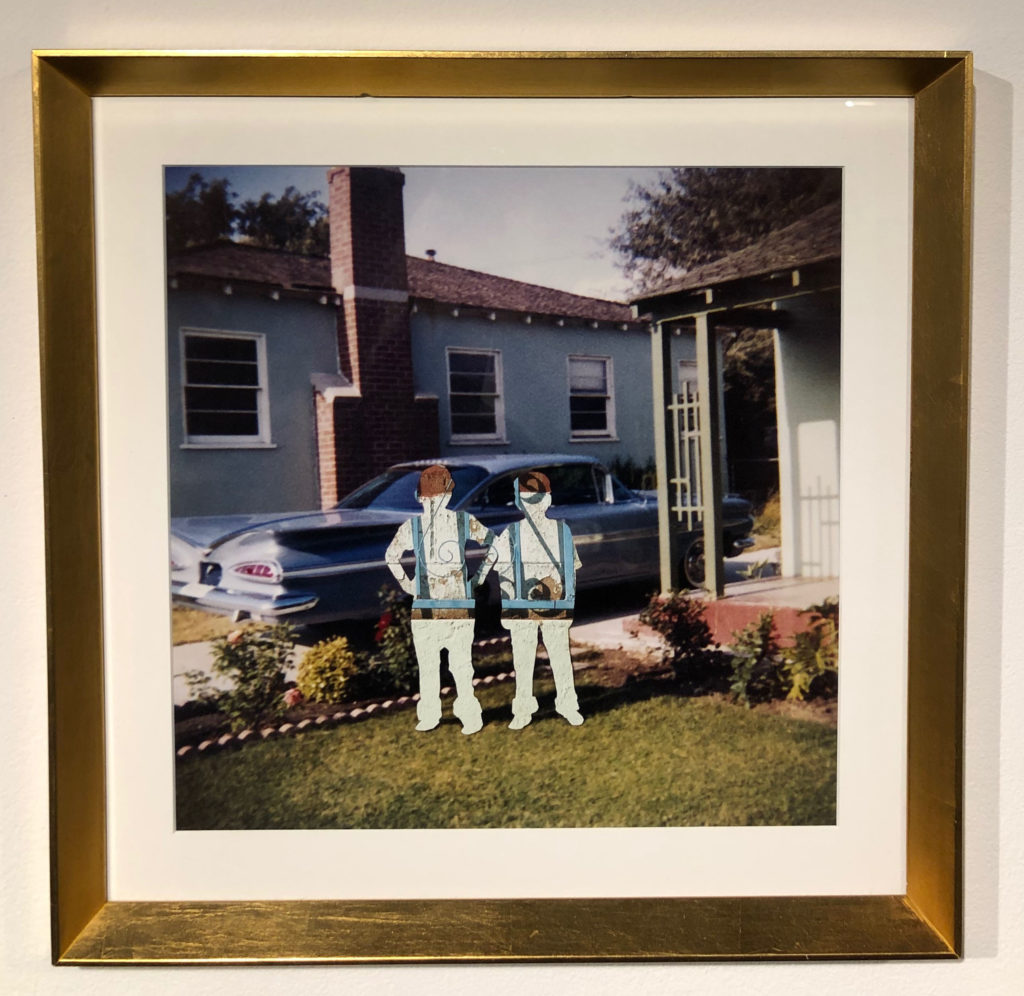 At the Pasadena Museum of History is Something Revealed; California Women Artists Emerge, 1860-1960, which includes over 300 artworks in various media including oil paintings, works on paper, ceramics, metalcraft, textiles and sculpture. It’s a chance to see work from artists who were skilled in their craft but often overlooked because of their gender.

One of the standouts from the exhibition is the work of Vivian F. Stringfield (pictured below), whose work was influenced by Japanese woodblock prints which were collected in Europe and the U.S. during the early 20th century. She also partnered with fellow artists Fannie Kerns and Marjorie Hodges to produce greeting cards in the late 1910s, some of which are also on view in the exhibition. 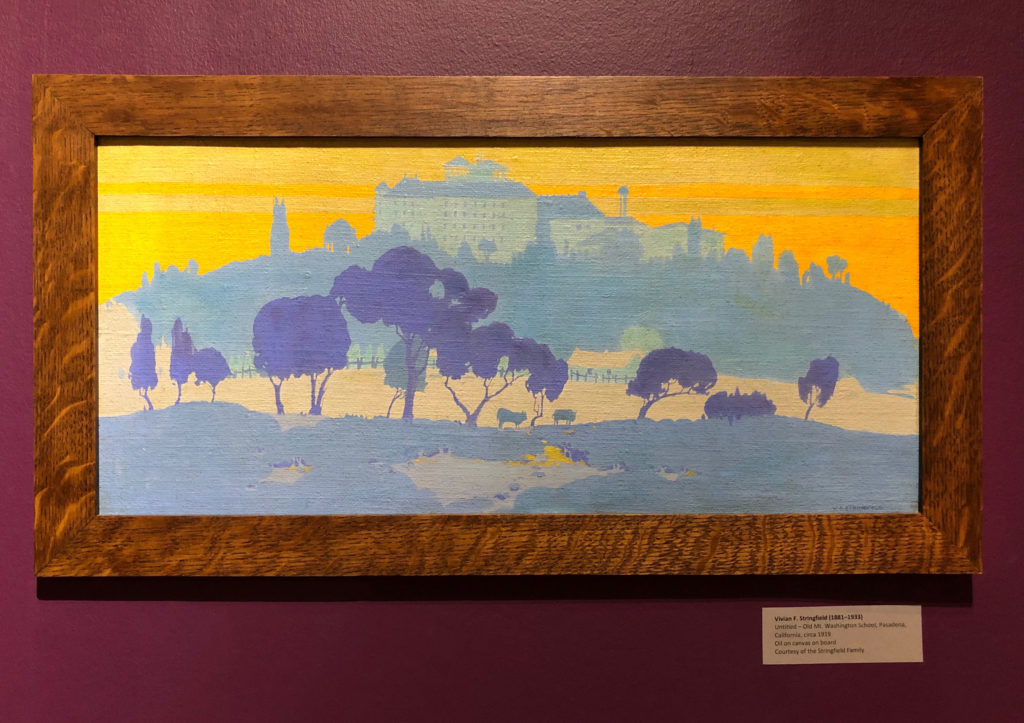 Painting by Vivian F. Stringfield circa 1919