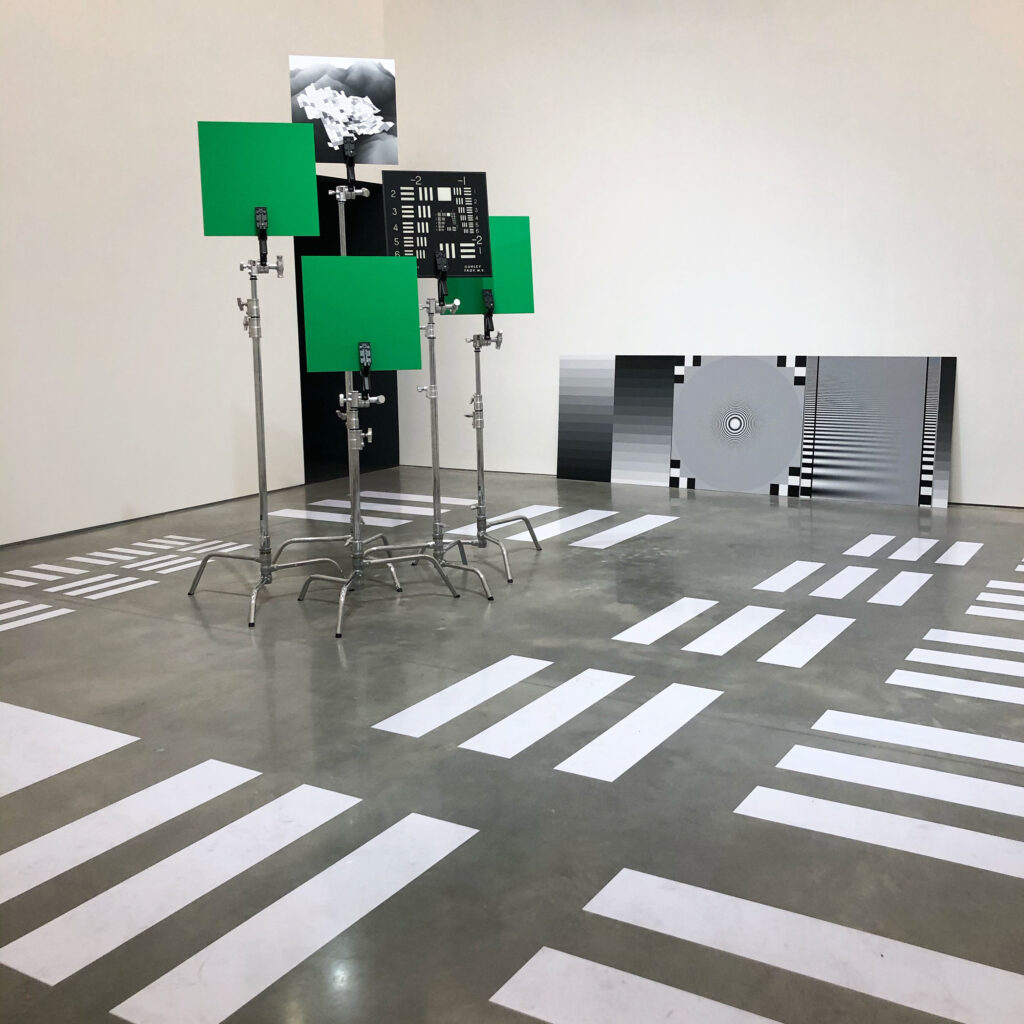 Also at Pace Gallery is the group exhibition Hiding in Plain Sight, a collection of work that includes Hito Steyerl’s installation (pictured above). It accompanies her video How Not to Be Seen: A Fucking Didactic Educational .MOV File, 2013. As we approach possible new ways of being tracked by technology, the work has never seemed more relevant.

Hito Steyerl’s video installation examines how hidden infrastructures operate at both an individual level and at a global scale. Offering five lessons in invisibility, the film wryly maps the formal, symbolic, and real connections between the worlds of art, economics, and global political regimes in our era. In an interview Steyerl explains “in the case of How Not to Be Seen, it started with a real story that I was told about how rebels avoid being detected by drones. The drone sees movement and body heat. So, these people would cover themselves with a reflective plastic sheet and douse themselves with water to bring down their body temperature. The paradox, of course, is that a landscape littered with bright plastic-sheet monochromes would be plainly visible to any human eye—but invisible to the drone’s computers.” Exploring the complexities of the digital world and its relationship to lived reality, Steyerl’s film and installation chart circuitous connections to art and capitalism through vision and technology. 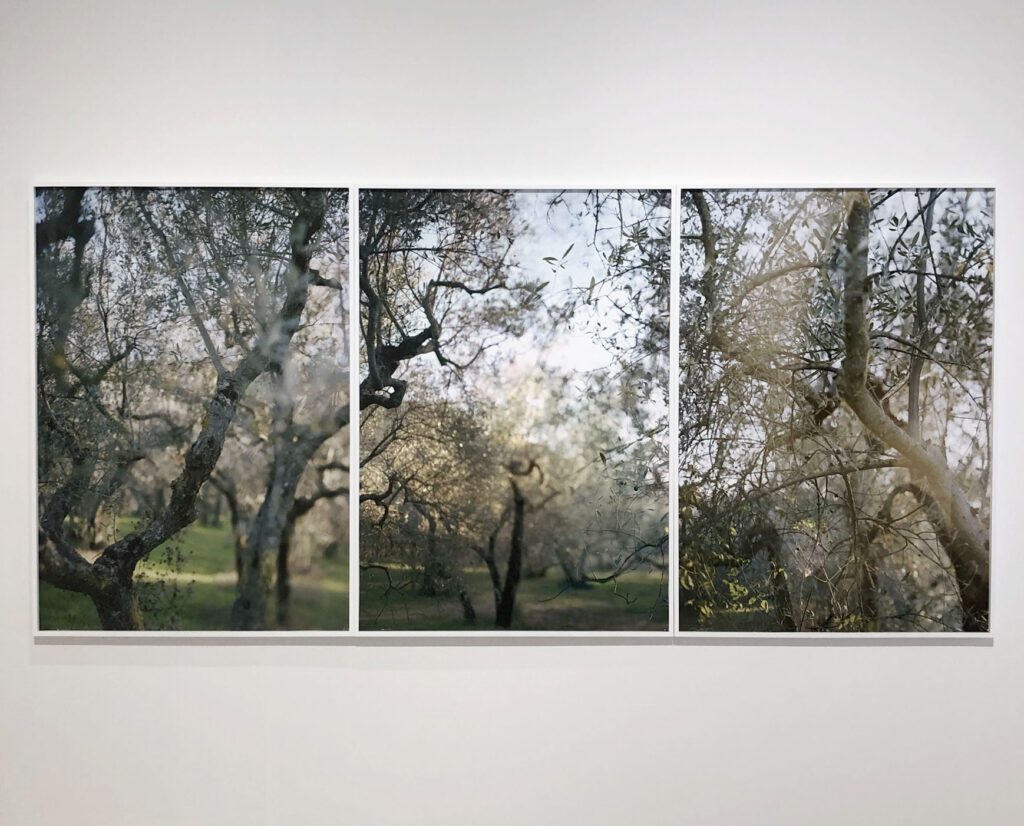 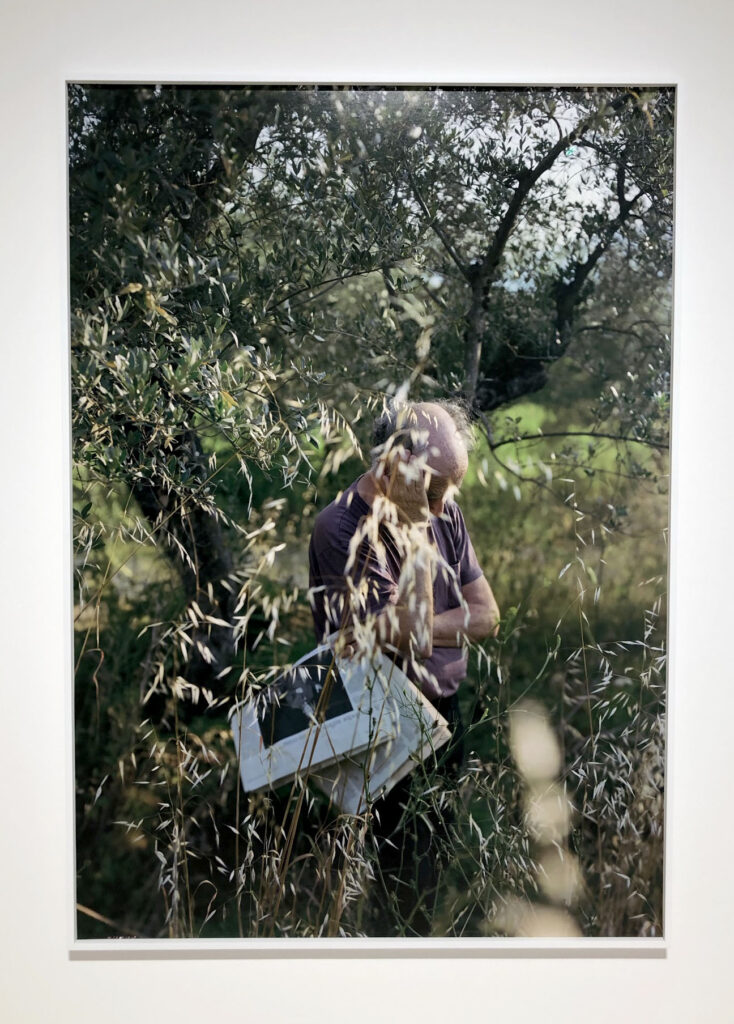 Pace Gallery is currently showing the lovely, meditative photographs of JoAnn Verburg at their NYC location.

JoAnn Verburg: For Now debuts recent multiple-frame photo and video works by the renowned American photographer depicting olive trees captured on three continents. Exemplifying Verburg’s multidisciplinary practice, which for over four decades has existed at the intersection of a range of art-historical traditions, including still life and portraiture, these experiential artworks offer a contemplative respite from the cacophonous urban environment outside of Pace’s gallery space in New York. In response to a period of social and political unrest and a global health crisis, Verburg’s presentation invites viewers to pause and enter a world of self-reflection while simultaneously diving into landscapes from Italy to California to Israel. Generating what the artist has called an “imagined reality,” her images become vehicles for orchestrating a performative and existential encounter between the viewer and the world.

For Now marks Verburg’s first solo exhibition with Pace since the gallery began representing her in 2020, and only the second exhibition in New York since her survey exhibition Present Tense: Photographs by JoAnn Verburg at The Museum of Modern Art in 2007.

Since her last exhibition in New York in 2010, Verburg has been experimenting with the intriguing implications of creating an installation of photos and videos within an urban environment that both acknowledge the environment and provide an escape from it. In this sense, Verburg’s desire to exhibit her images of olive trees in New York reflects her interest in the disjuncture between the contemplative space of the gallery and the busy world outside. Like the pioneering Italian still life artist Giorgio Morandi, Verburg returns repeatedly to the same subject matter—arranging and rearranging her images in three-dimensional space through use of vantage point, framing, and light, while employing techniques of classical craftsmanship, including the production of each singular print herself. In the editing process, she manipulates elements forward and back in space, creating emphases and clarifying her images by manipulating color like a painter. Having studied sociology as an undergraduate, her artwork also reflects a deep philosophical engagement with the social and formal histories of photography as well as the work of key practitioners who blended formalist concerns with sociological awareness, such as Diane Arbus and Robert Frank.

While the subject matter depicted in For Now is olive trees, the subject of the exhibition itself is the experience of the present moment—what Verburg calls “Vermeer time,” evoking the sense of suspended animation that characterizes the paintings of Dutch master Johannes Vermeer. “Her pictures describe spaces and moments suspended in the reverie that precedes action,” observed the celebrated photographer, curator, and critic John Szarkowski, “Like a Leyden jar, they are containers of potential.” Treating the olive grove as both landscape and still life, her focus on a limited range of subject matter suggests a connection between her work and the Minimalist and serial practices of the 1970s. Yet Verburg’s practice is also aligned with Old Master paintings: her works resist the acceleration and velocity of contemporary culture…

If you are unable to see the works in person, the Pace website has them on view as well as the full press release and a video of the artist in her studio. 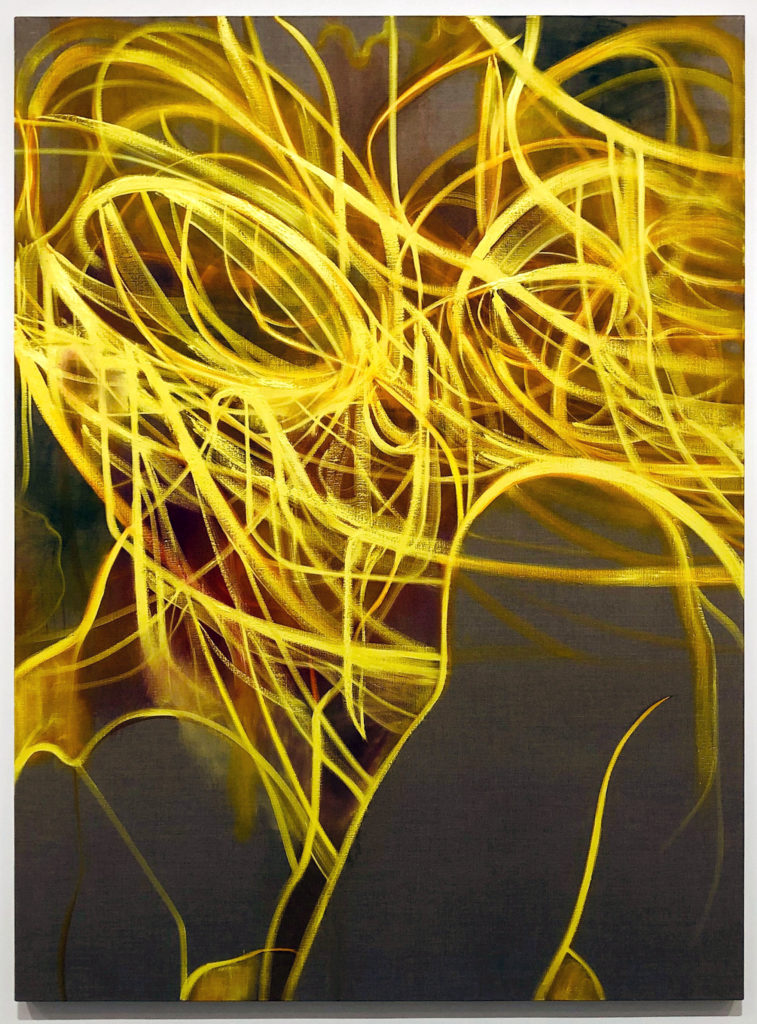 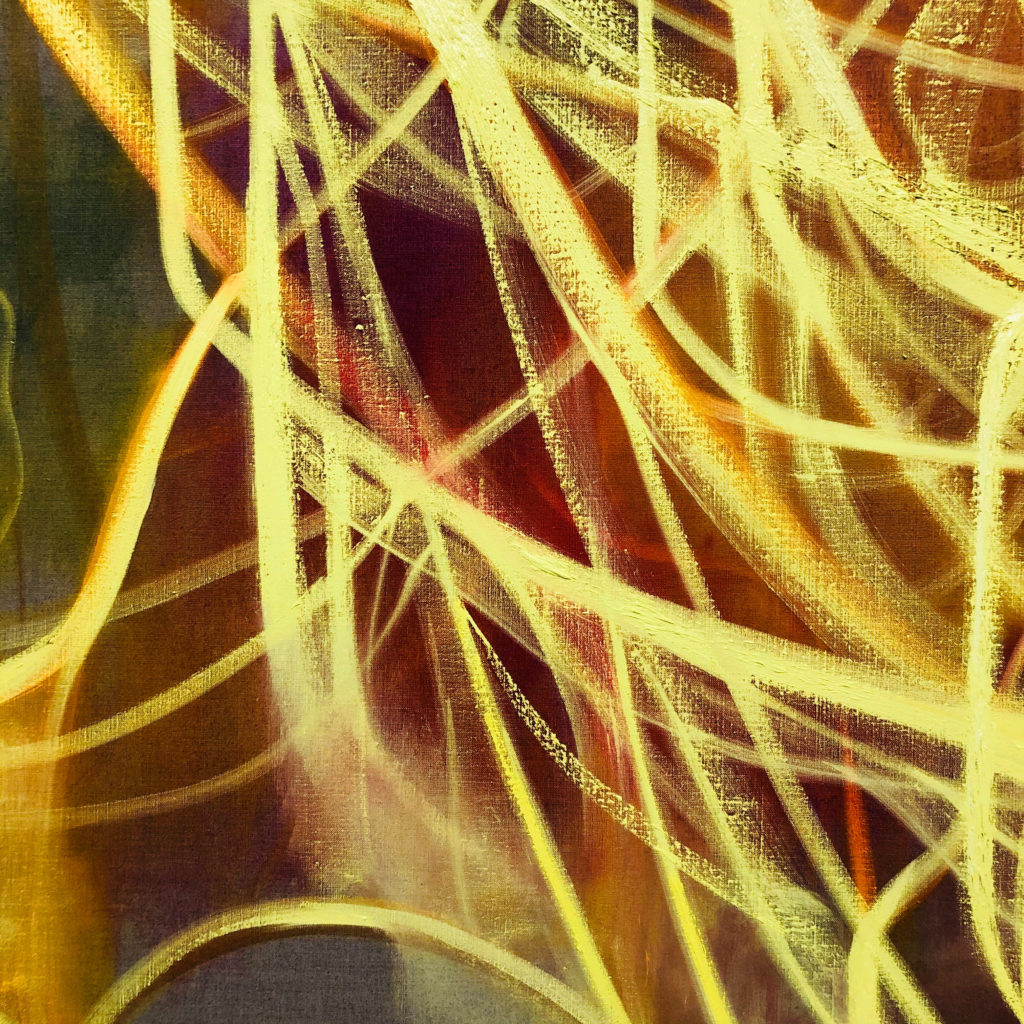 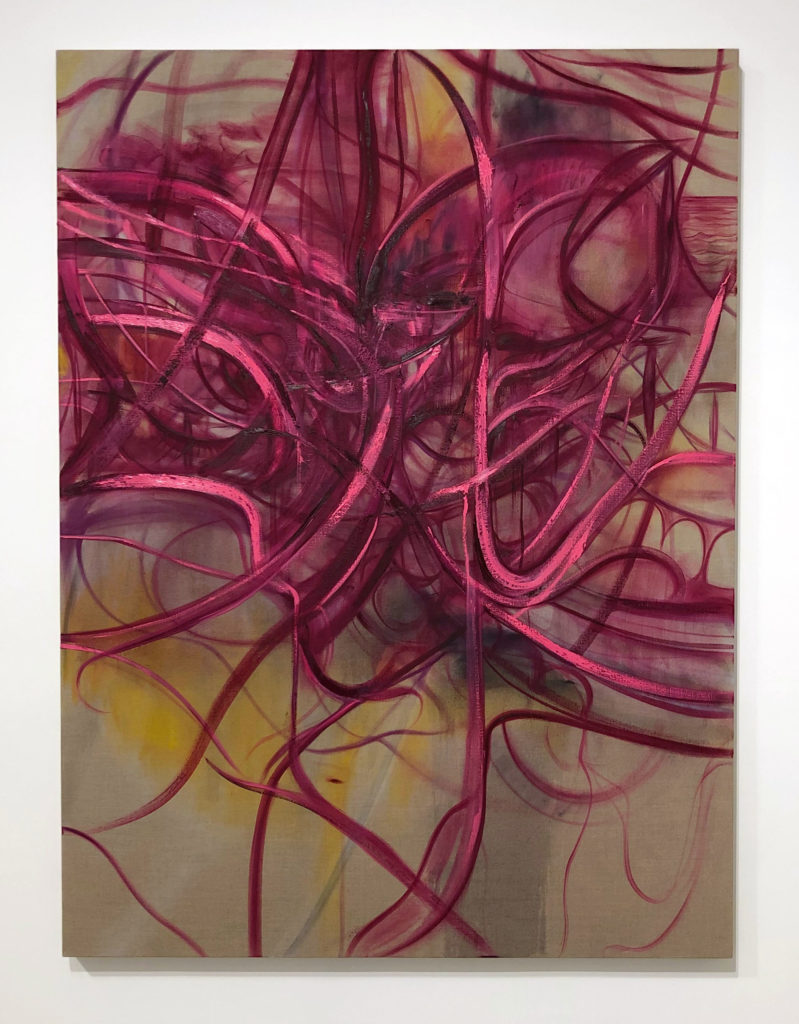 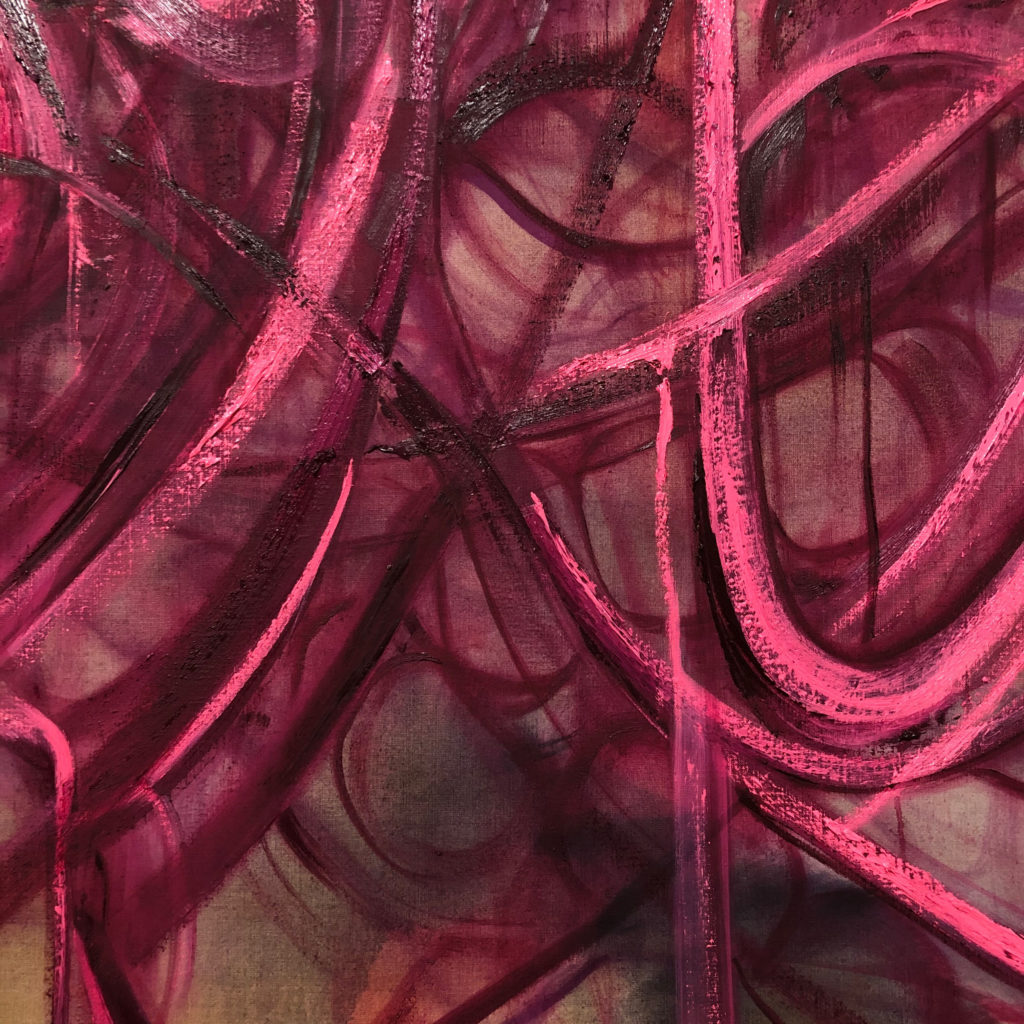 Currently at Pace Gallery in New York are Nigel Cooke’s ten large-scale paintings. The paintings have an exuberant intensity to them. Close up the shades of varying color, layers of paint, and the textures created by the brush strokes, show the detail that went in to creating the overall effect of the work.

Completed over the past year, these ten new large-scale paintings mark a significant shift in the artist’s direction toward a more performative, energetic, and abstract approach to figuration. This shift was propelled by a recent residency in the city, where Cooke remarked that “the entire philosophy of what it is I am doing has been adjusted.” These works, which reference actions, places, and people, exist as matrices in which the artist’s free and open process meets wider themes of metaphor, spirit, nature, representation, and the living material quality of paint. In this way, these new works draw on the legacies of American artists such as Willem de Kooning and Clyfford Still as well as Abstract Expressionism, British Figuration, Spanish painting, and Chinese silk painting.

…These dynamic compositions become transitional grids that unfix and multiply the idea of what a figure is, reflecting a complex interplay of vigor, chance, and intuition. They begin with a single color drawn in a loose structure that drives the painting process forward. Building up the canvas in lines and washes, the paintings move away from a defined image, resulting in a myriad of possibilities from the mud and grit of real landscapes to atmospheric emanations or presences. As such, they do not depend on a fixed viewpoint but drift between states, contradicting themselves over time and allowing for the possibility of transformation.

Furthering Cooke’s radical shift in his practice, the paintings were executed on raw canvas—a first for the artist. The natural linen endows the paintings with a unique brownish ground and a textured weave that is seen throughout the works. This material quality also impacts Cooke’s mark-making as washes develop into thickets of dark staining and lines that taper off and sometimes produce kasure or “flying white,” an ancient Chinese silk painting technique known for its ribbon-like strokes that sputter and appear to leap off of the surface of the canvas. 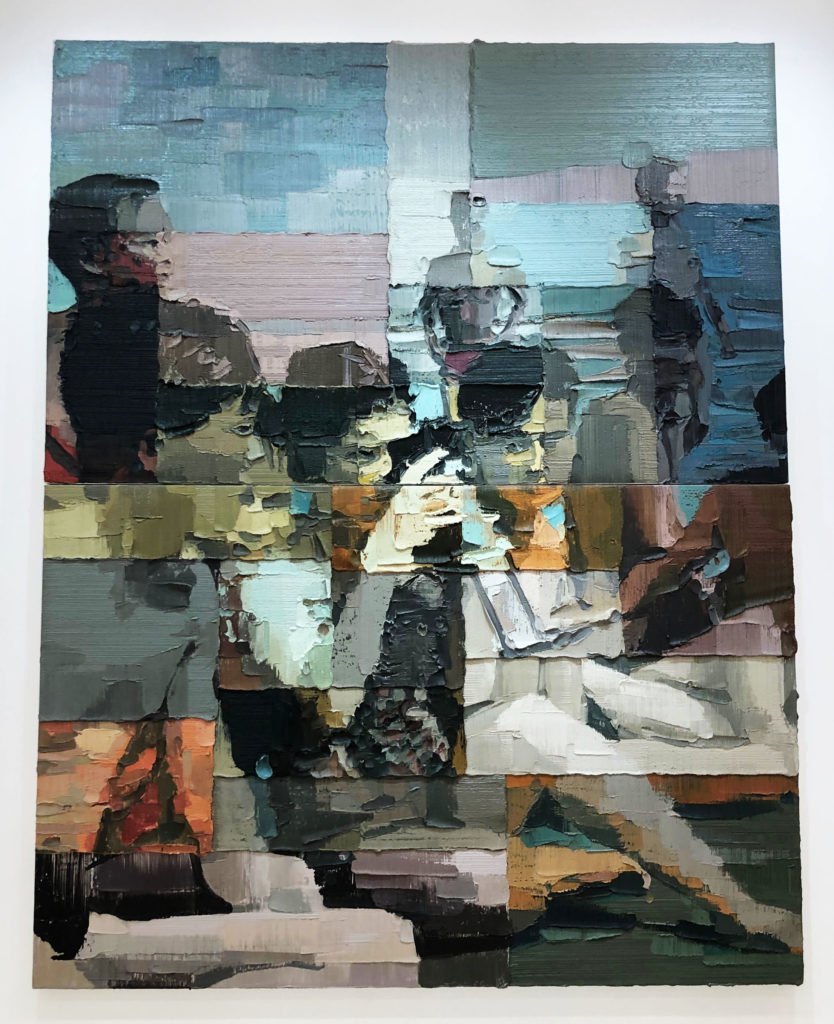 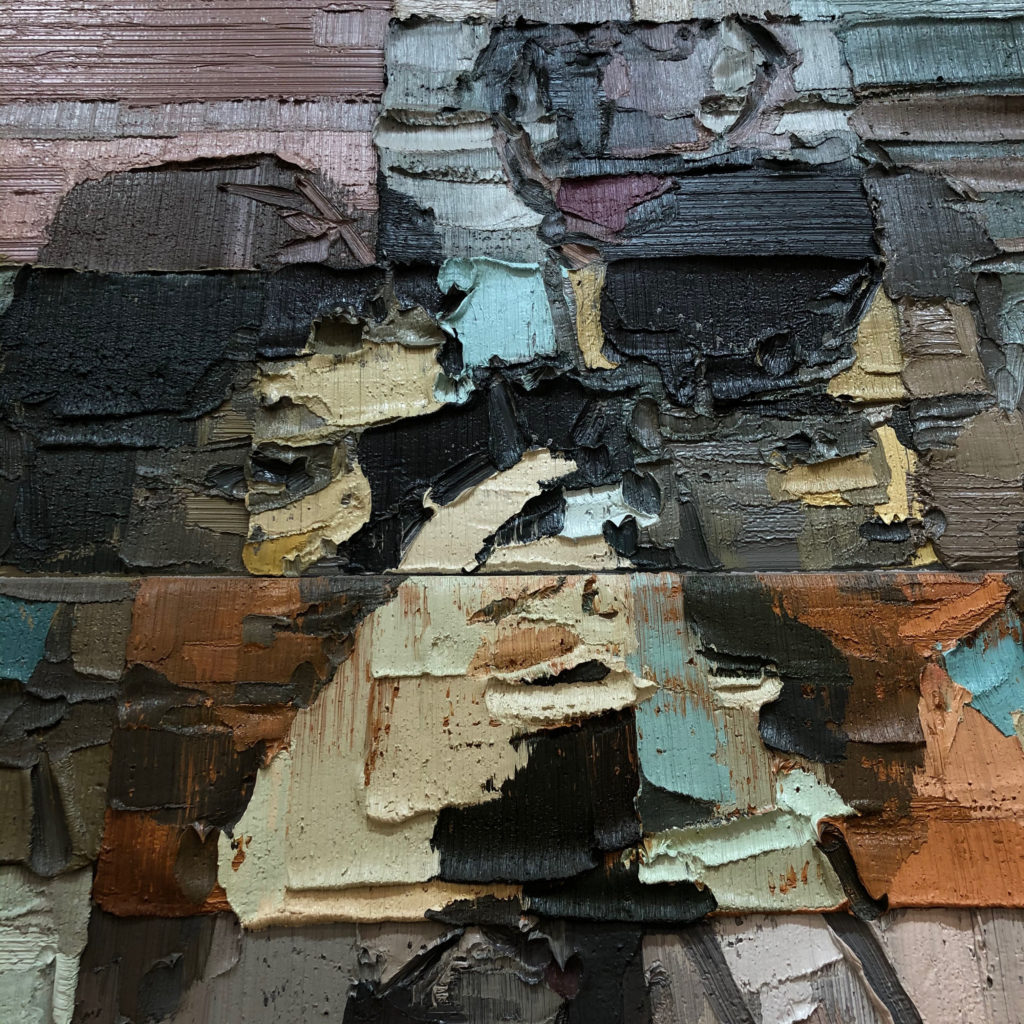 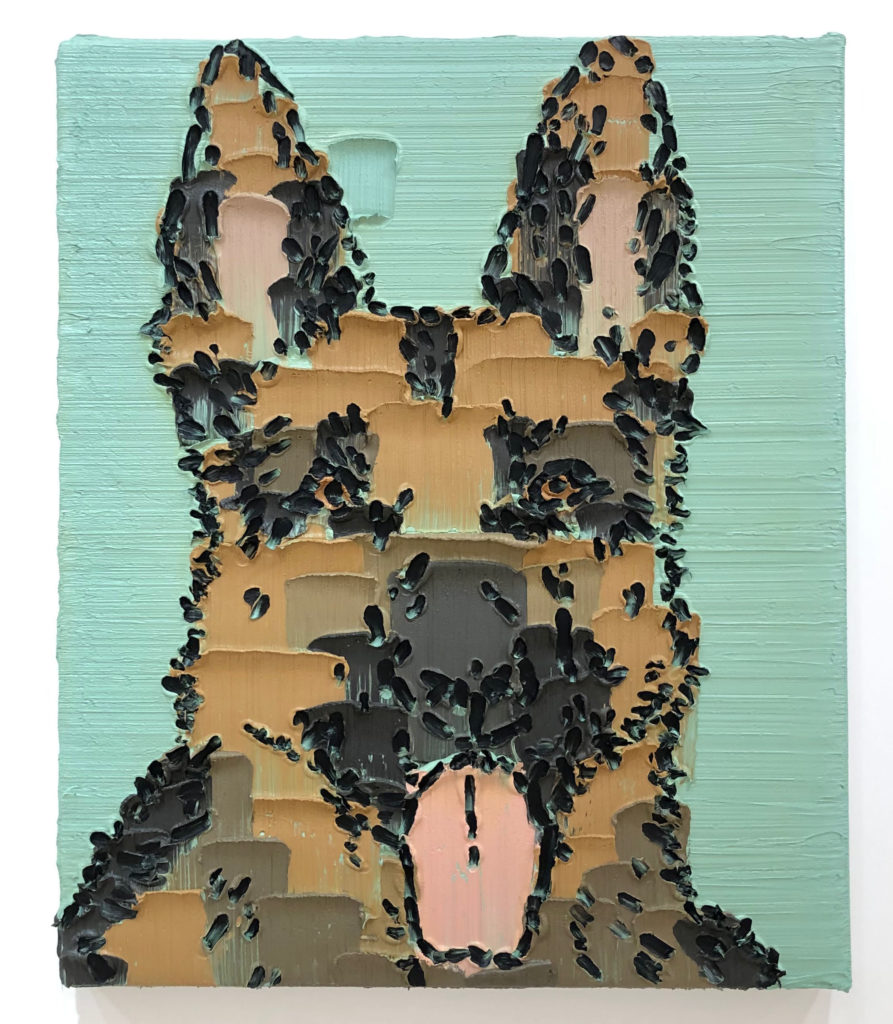 The paintings in Li Songsong’s One of My Ancestors, at Pace Gallery in Chelsea, are rich in both color and texture. Li creates his paintings from found photographs, adding another dimension to the work.

In the process of reinterpreting found imagery drawn from public sources such as everyday news items, Li adopts an impartial attitude. “I did not deliberately look for these images,” he explains, “It just happened. For example, a friend of mine went to an old book stall in Beijing to buy old magazines. I saw a good photo, and then I used it. I don’t seem to care about the content of the image itself. Of course, they are a starting point, but they will affect you more on a psychological level than in a narrative way.”

Li is interested in the ways in which images can trigger memories and emotions—a psychological impact magnified by his technique. The use of impasto and the dense materiality of his brushstrokes elicit a potent haptic response, while his palette of cool shades of gray, green, and beige create an estrangement from his chosen subject matter, as seen in Little Brother (2017), South (2017), and Civil Rather than Military (2018). Through his signature use of compact blocks of color, Li deconstructs and reassembles images, pushing his art towards abstraction. 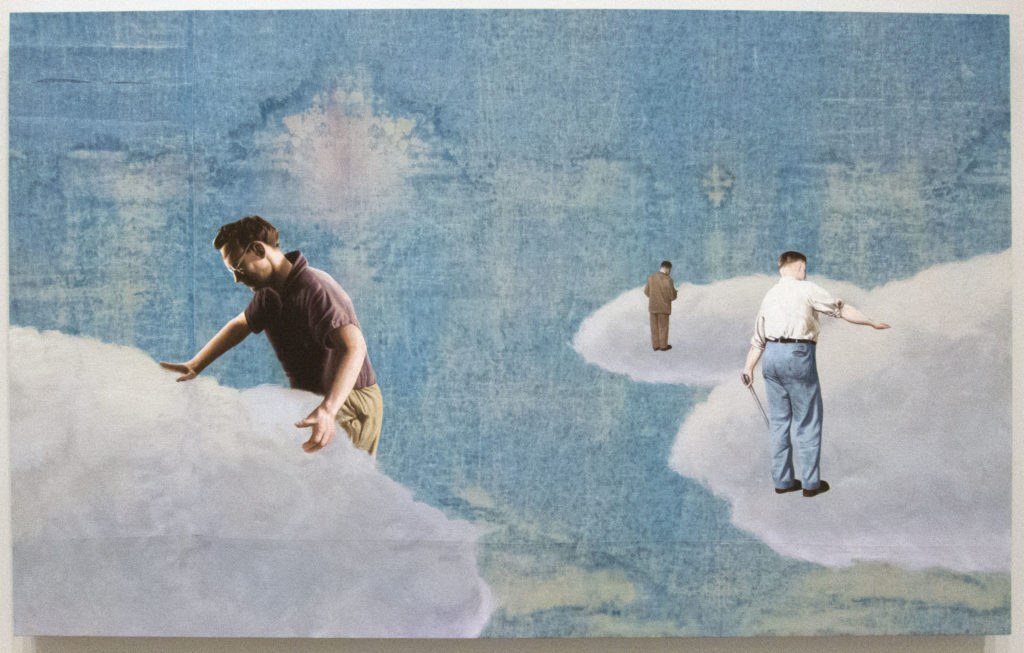 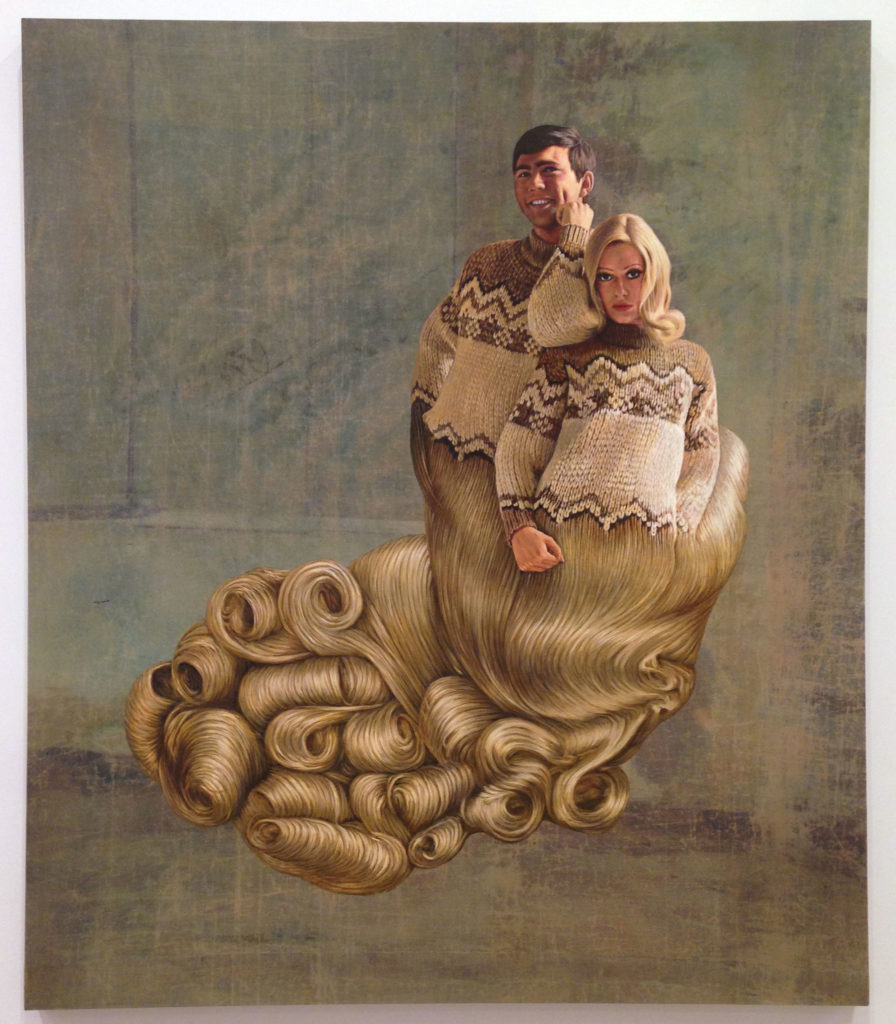 Currently at Metro Pictures, Jim Shaw’s current mixed media exhibition is full of works that are interesting, engaging and fun.

Rendered in exquisite detail, Shaw’s virtuosic work combines his analysis of the political, social and spiritual histories of the United States with contemplative reflections of his own psyche. For more than three decades he has examined art history, comic books, subcultural undergrounds and consumer products—to name only a few of his wide-ranging fields of interest—to articulate a distinct visual language that charts the country’s ever-shifting sociopolitical landscape.

The paintings in this exhibition incorporate symbols and characters of the past to comment on our fraught present. Using imagery drawn from Old Testament stories, pagan myths and satirical cartoons, Shaw relies on his encyclopedic knowledge to visualize our common vernacular. His layered symbology reads like an exaggerated mirror of our hyper-mediated, “post-truth” reality. 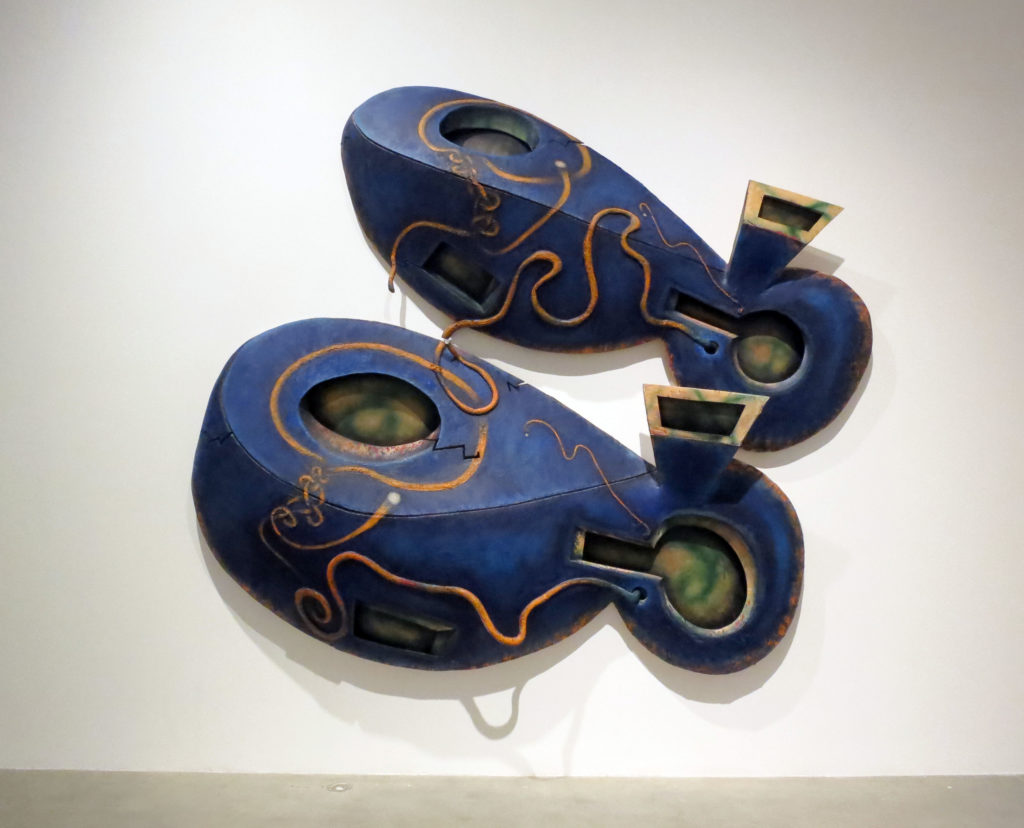 At Pace Gallery’s 25th Street location is Elizabeth Murray: Painting in The ’80s, a collection of sixteen unique colorful canvases the artist created during this period.

Elizabeth Murray: Painting in the ‘80s presents formal and narrative content that continues to influence the techniques and subject matter of contemporary painting. Murray arrived in New York in 1967 during the heyday of Minimalism and the rise of Conceptualism, and amid prevailing assertions of painting’s demise. As she recollected, “The mood was that painting was out, that hip people, people who were avant, weren’t involved in painting. That was unnerving, but then I didn’t give a damn.” Fully committed to painting, Murray broke new ground depicting personal, poetic and at times feminist narratives on complex multidimensional shaped canvases. Murray’s compositions from the 1980s suggest large-scale breaking cups, tumbling wineglasses, tilting tables, windows, rooms, attenuated human forms, letters, symbols and abstract shapes constructed through positive and negative, real and imagined space. As Roberta Smith has written, “She has put the vocabulary of twentieth-century abstraction to new and different uses, tracing in irresistible formal terms a psychological narrative that is not explicitly feminine but that women, thanks to society’s relentless conditioning, know best and most completely.” 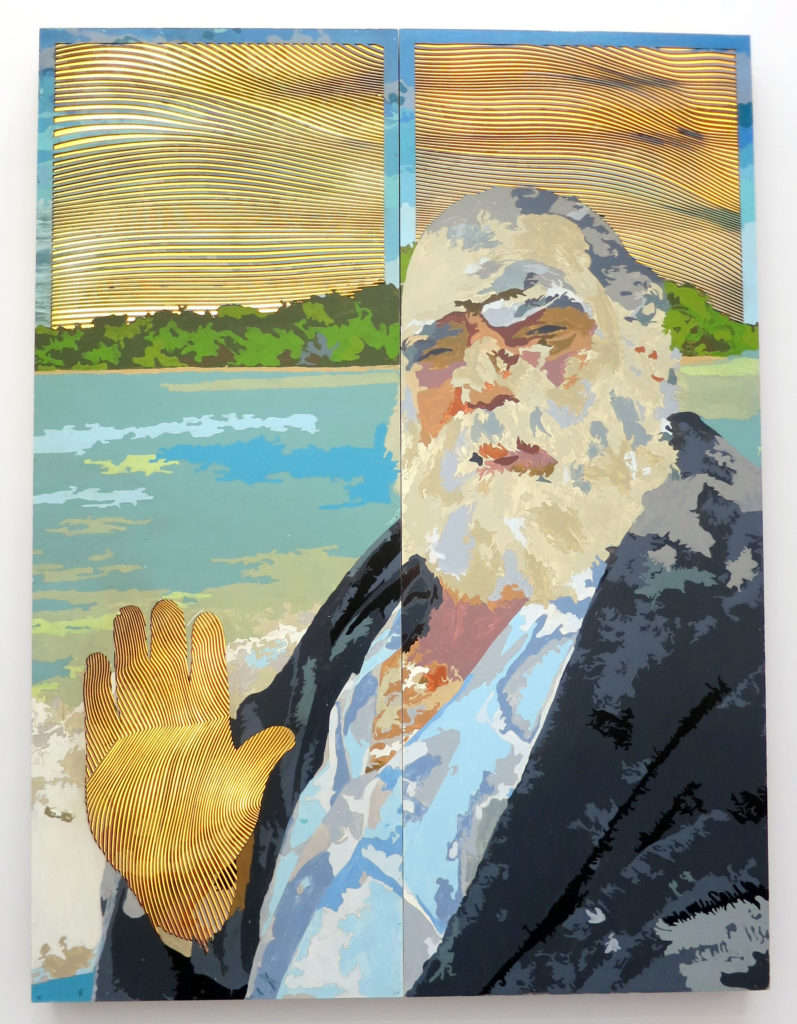 For Jorge Pardo’s first painting show at Petzel Gallery, he combines his painted self portraits with a sculptural element. Candid snapshots of the artist are “blown-up, engraved, laser-cut, hand-painted and back-lit with LEDs, to produce, in some cases, vast ornamental objects”. The beautiful large works have the added effect of changing slightly depending on where you stand in the gallery as the light shines through the wood. 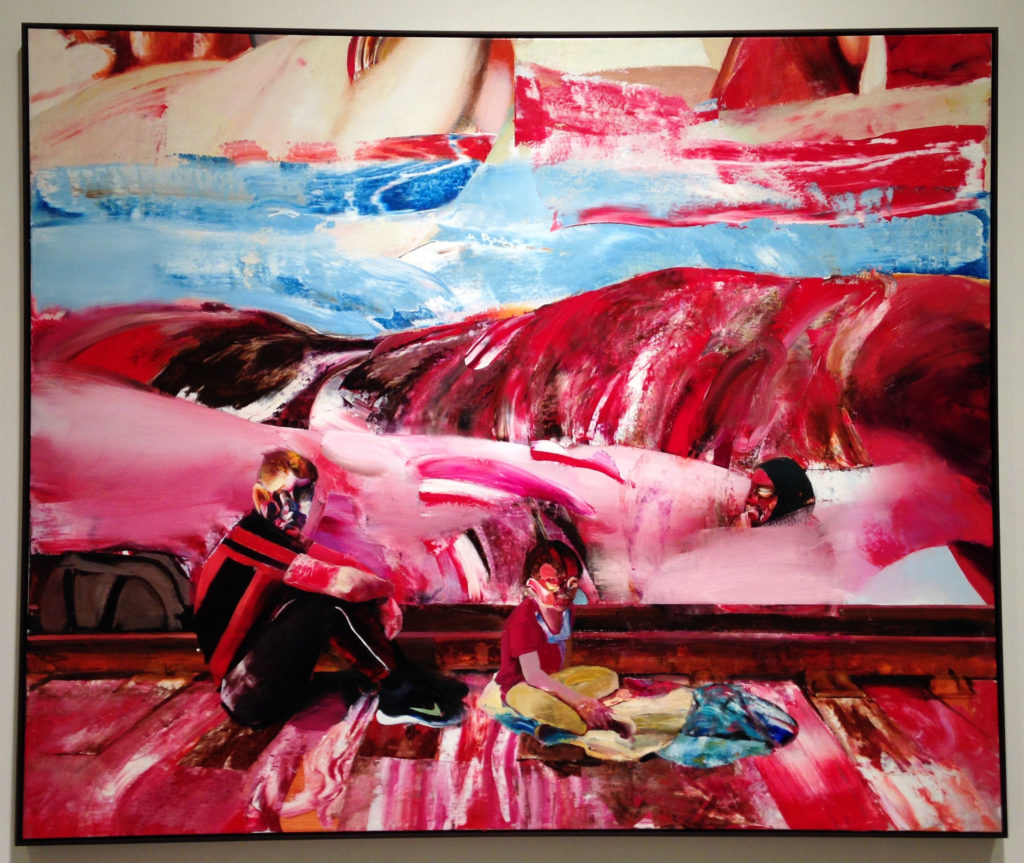 Rest During The Flight Into Egypt, 2016 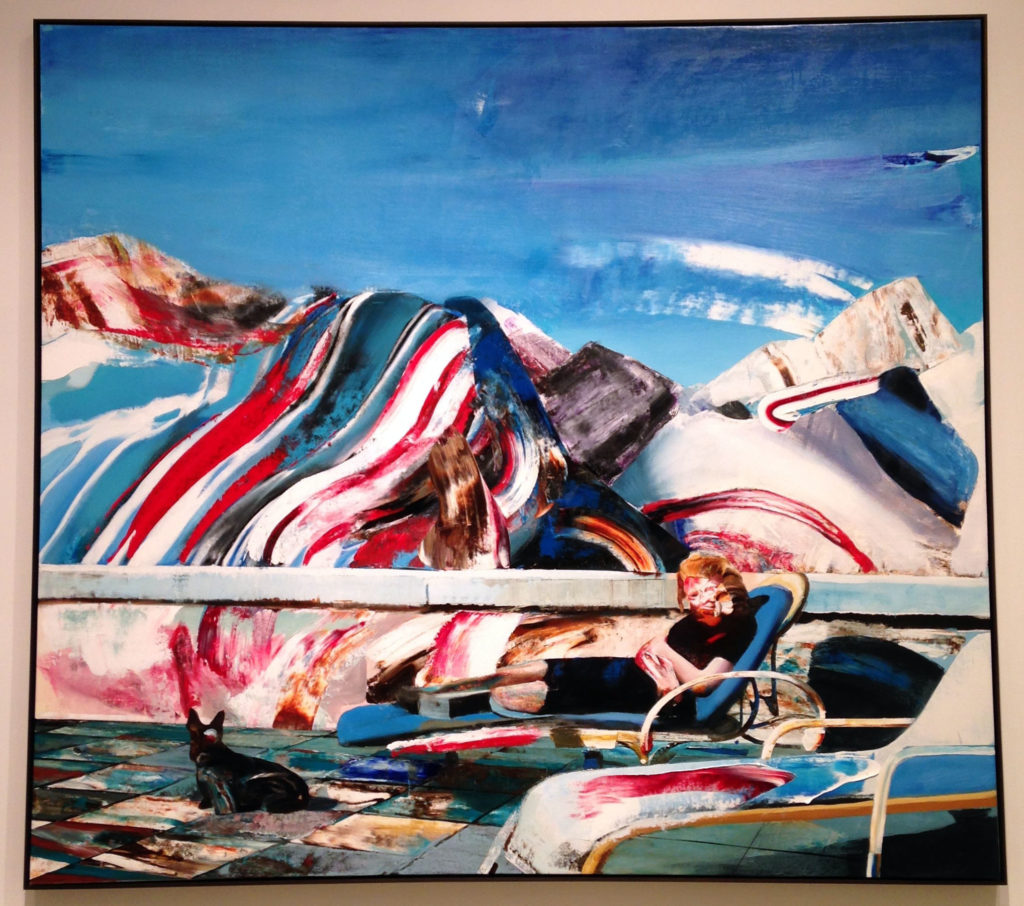 Many of Adrian Ghenie’s oil paintings take up their own wall in Pace Gallery and it is hard not to be drawn in by the bold colors and the blend of figuration and abstraction. The exhibition also includes some of his smaller collage pieces, which help to show Ghenie’s process for creating this work, and three of his self portraits.

Born in 1977 in Baia Mare, Romania, Adrian Ghenie was formally trained as a representational painter. He adopted conceptual tendencies from Dada that he synthesizes with his rigorous technical abilities, displaying both a Baroque mastery of chiaroscuro and a gestural handling of paint indebted to Abstract Expressionism. In 2008, Ghenie’s paintings began to explore themes of history, memory, and the former Communist regime of his native Romania, not through biographical reflection but rather through a direct address of the legacies of historical figures. The imagery in his paintings is largely derived from historical sources incorporated into dreamlike or cinematic vignettes in which figures appear in haunting interiors.